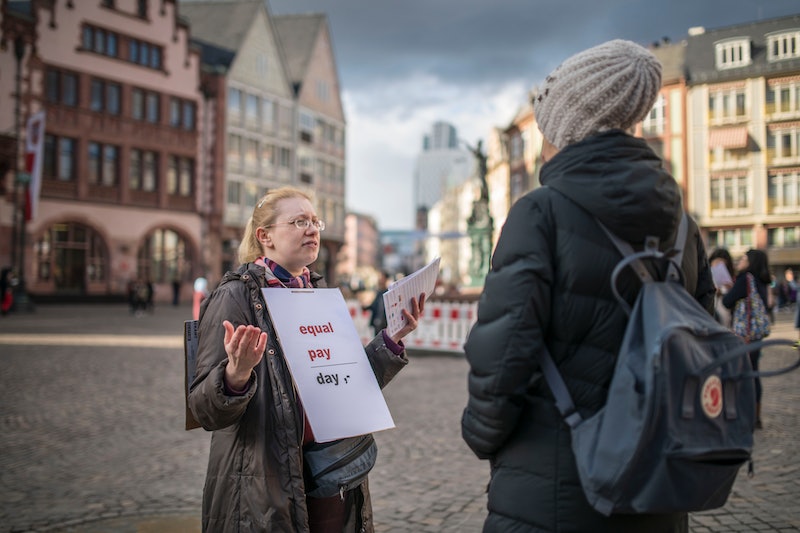 Looking for a national holiday that's more profound than National Spinach Day? Good news: Equal Pay Day, the holiday that highlights the unjust discrepancy between the wages of men and women, is Tuesday, April 2, 2019. You'll want to start thinking about what you're going to write on your march signs for Equal Pay Day, because the holiday is really more of a call for action than anything else.

Currently, women make only 80 cents for every dollar that a man makes. If we look back to 1963 when President John F. Kennedy first signed the Equal Pay Law, (making it illegal to pay women less wages for the same role as their male co-workers) women were earning only 59 cents for every dollar that a man made. It's not nearly enough progress, and it's important to remember that even those 80 cents on the dollar are an average. Other factors like race and age can bring that number even lower.

To participate, the NCPE asks that you wear red, to show how this persistent pay gap keeps women and minorities in the red, financially speaking. Whether you're able to join a local protest or simply plan on raising your voice on social media, you'll want a great slogan with a strong and clear message. Here are a few pay equality ideas for you to consider:

We don't have 100 years to wait for equal pay to catch up with our equal work.

"When we step up for ourselves, we create opportunity." -Kerry Washington.

“Men have to demand that their wives, daughters, mothers and sisters earn more—commensurate with their qualifications and not their gender. Equality will be achieved when men and women are granted equal pay and equal respect.” - Beyoncé

Yes, we mind the gap!

Will work for equality.

"You should never be fearful about what you're doing when it is right." - Rosa Parks

"If fighting for equal pay and paid family leave is playing the gender card, then deal me in!" - Hillary Clinton