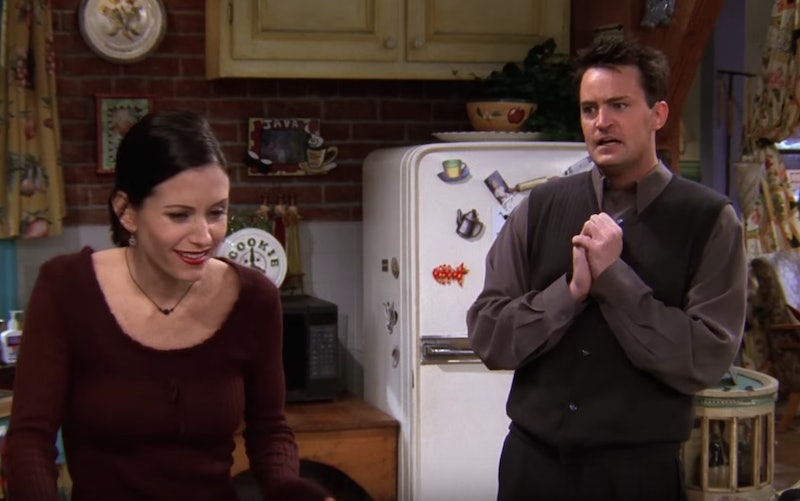 Friends contains so many delightful moments from every character that it's almost impossible for fans to choose a favorite season, let alone a favorite episode. Yet there isn't much of a question when it comes to who the most relatable character is, because Chandler Bing stands out in that category as an obvious winner. Even if you think you're more like a Monica or a Phoebe, once you see these 13 relatable Chandler moments from Friends, you might just be convinced to change your prepared answer for which Friends character most resembles you.

Because Chandler is one of the least quirky people in the group, he serves as the voice of wisdom during many scenes in which he calls out his friends' eccentricities. Of course, he has his own quirks — like his constant desire to go back to smoking cigarettes and his colorful upbringing — but he usually provides the funniest commentary during the show's most ridiculous moments.

Chandler's not a bad character to resemble, and if you're bummed that you actually relate to him more than you do, say, Rachel, you shouldn't feel bad. He goes from having the least luck in romance to forming the most solid relationship — with Monica — out of everyone, and he thrives in his career. It's a great thing to be like Bing, really, as shown by these 13 super relatable moments.

More like this
Lisa Kudrow Explained How Her Body Image Changed While Filming 'Friends'
By Grace Wehniainen
Josh Peck Shows Love To Jennette McCurdy After Her Shocking 'iCarly' Revelations
By Radhika Menon
At 14, D'Arcy Carden Was Sneaking Out To Parties & Crying Over Kurt Cobain
By Ivana Rihter
Miranda Cosgrove Reacts To Jennette McCurdy’s Shocking ‘iCarly’ Revelations
By Grace Wehniainen
Get Even More From Bustle — Sign Up For The Newsletter