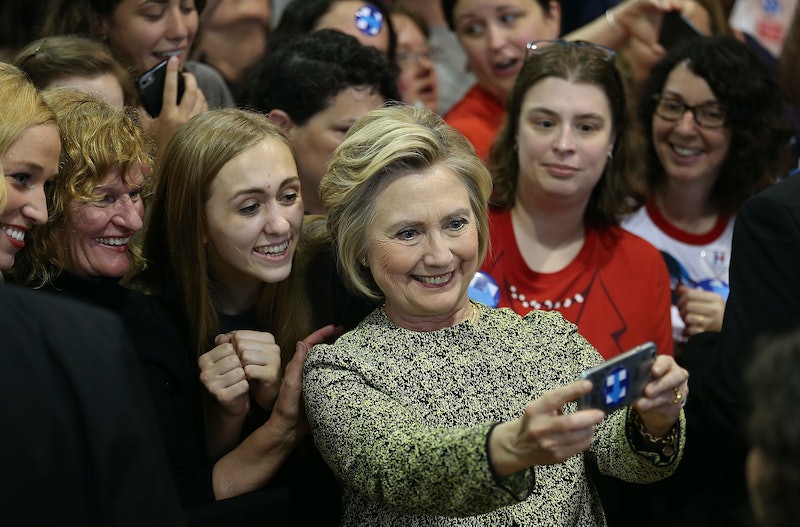 Social media played a bigger role in Hillary Clinton's and Donald Trump's campaigns t than in any other presidential matchup. With his bombastic and outrageous tweets, Trump's account often stole the show, while Clinton's more "diplomatic" account rarely got the same attention. But the former secretary of state wasn't always above the fray.

Sure, some were critical of Clinton and her tweets, calling her out for her alleged millennial-pandering tweets like overusing "YAS" or sharing photos with Jay-Z and Beyonce. But generally, she was pretty restrained — and that made her zingers stand out all the more, like when she quoted Trump's complaint about Barack Obama endorsing "Crooked Hillary" with a simple "Delete your account."

Clinton also used Twitter to stand up for and inspire women. Sometimes, that came in the form of defending women who had allegedly faced some of Trump's ugly comments, like Alicia Machado who was allegedly called "Miss Piggy" and "Miss Housekeeper" by him. Other times, it was to share inspirational messages, like her pinned tweet of a line from her concession speech on Nov. 9: "To all the little girls watching...never doubt that you are valuable and powerful & deserving of every chance & opportunity in the world."

I've rounded up some of the Hillary Clinton tweets that blew our mind and continue to do so.

This line may go down in history as the most memorable in Clinton's etire 2016 presidential run, and it remains one of her most retweeted.

2. Adorable & Inspiring All At Once

As cliche as it is, this picture really does seem to say a thousand words — and optimistic ones at that about what the future of America may hold. The black-and-white shot of Clinton against a little girl who could very well be a future president manages to be genuine and heartwarming at once.

3. Standing Up For Alicia Machado

Clinton was not going to let Trump's alleged body-shaming get a free pass, and former Miss Universe, Alicia Machado, ultimately became one of the most memorable names of the 2016 presidential race.

4. A Birthday Tweet To Remind Us How Far We Ca Go

A little presumptuous? Sure. But there was still something charming and inspiring by seeing a shot of young Hillary Rodham while knowing how far she would go.

Remember when she responded to the infamous Access Hollywood tape, revealing Trump's "grab them by the pussy" remarks? She wasn't here to send some zingers. The concise gravity of her words were the spot-on response to how serious Trump's hot mic comments were.

Clinton used Twitter to defend the people she believed were most excluded and maligned by Trump's rhetoric. She didn't tweet as often or vociferously as her opponent, but when she took to Twitter, he comments provided a powerful rebuke.

7. Dropping Some Knowledge On Team Trump

Sometimes, Clinton used Twitter to highlight her best lines from the presidential debates. Here "a man who can be provoked by a tweet" became one of the most quoted of the election.

10. Why Fact-Checking Is Important

Throughout her presidential campaign, Clinton positioned herself as the more detail and fact-oriented candidate. While sometimes being wonky doesn't sell, some fact-checking can definitely pay off in the right tweet.

This tweet actually went down as the most retweeted one of the campaign. Sure, it was a nice burn at the time, but considering the 9th Circuit Court of Appeals recently cited his tweets in a decision against his executive order travel ban, Trump may be wishing he followed that advice.

12. Showing Love For The Women's March

Since so many of the participants at the Jan. 20 march were inspired by her presidential run, Clinton's tweet hit home.

13. The Surprisingly Hilarious Part Of Her Debate Prep

Since losing the presidency, Clinton has, at times, gotten a bit more colorful with her tweets. Sharing video of her practicing dodging a hug for Trump as part of her debate prep is one of the best examples of Clinton cutting (relatively) loose on Twitter.

14. She Loves Covfefe Jokes — Just Like The Rest Of The Country

When Trump tweeted his ""covfefe" message, it went viral pretty much instantaneously as people across Twitterverse piled on with jokes and memes, However, Clinton may have won the day with her tweet. She later told a California crowd IRL, of the president's tweet: "I thought it was a hidden message to the Russians."

More like this
Twitter Is In Utter Meltdown After 'Derry Girls’ “Poignant” Finale
By Sam Ramsden
Twitter Can’t Get Enough Of The WAGatha Christie Trial
By Nola Ojomu
How To Support Gun Control Reform Right Now
By Morgan Brinlee and Carolyn Steber
Taylor Swift, Kerry Washington & More Speak Out On Uvalde Mass Shooting
By Jake Viswanath
Get Even More From Bustle — Sign Up For The Newsletter