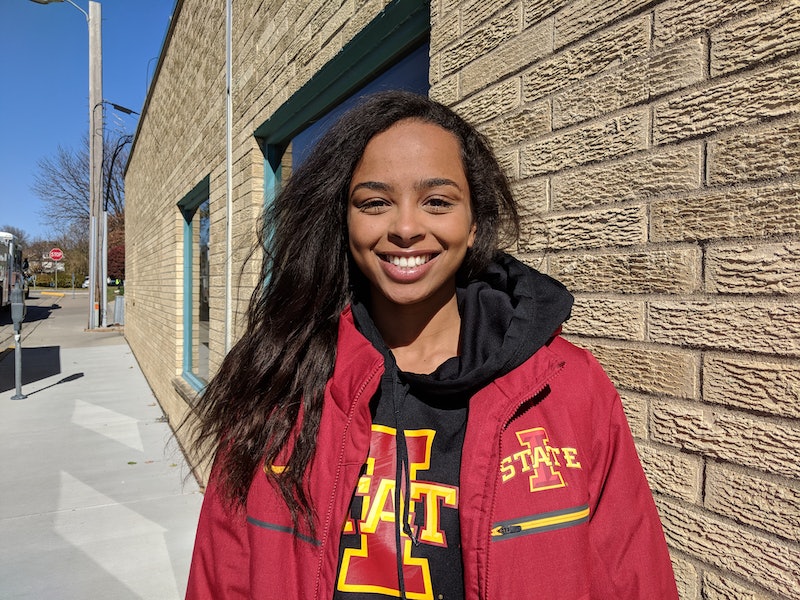 The generation that's currently between the ages of 18 and 35 is on the cusp of overtaking Baby Boomers as the largest group of voters — and if they all got out to vote, they'd be immensely powerful at the polls. More than half of millennial women say that the 2018 midterm elections are the most important midterm elections in their lifetimes, according to a survey from the Hive, theSkimm, and SurveyMonkey. Plus, women have a decades-long track record for outnumbering male voters, the Center for American Women and Politics reports.

But other recent polling has found that a majority of young women haven't committed to casting a midterm vote. Only 30 percent of millennial women surveyed by Refinery29 and CBS in August said they would "definitely" vote on Nov. 6. So to understand what is driving women under 35 to the polls this year, Bustle headed to Iowa, the crucial early-voting state that politicians tend to visit when they're testing the waters for a presidential run. From health care to the environment to the cost of higher education and beyond, women across the state told us why it's important to them to vote next week — and which issues they're most passionate about.

To Work Toward A Better World

"I want to be able to pick people who kind of represent my own beliefs, because I feel like there’s a lot of things going on today that are not so good or that I don’t really believe in," Shaylyn Lewis, 18, says, citing discrimination against minorities and LGBTQ people. "I’d like to be able to just do what I can to fix those issues or prevent them or work toward a better world."

"It’s time for change, and I feel like we’ve got some great opportunities in front of us and people who actually care," Jessamy McKinney, 33, says. "So I think it’s important that we get out there and encourage others. Especially as an educator, I feel like it’s scary to see the change that happens when the wrong people are in place, and I’m ready to have some people who are going to be having our best interests in mind."

To Make An America That's Safe For Everyone

"I’ve been in America since 2002, and it’s 2018 and we’ve been [applying for citizenship] for probably the past 10 years, so it’s been a long and hard process but we’re getting there," Lynette Kwaw-Mensah, 21, says. "I feel like this should be an America for everybody, not just a person who looks a certain type of way. I feel like you often you hear one person can’t make a difference, but I feel like every vote counts. To see a better tomorrow in America that I want to live in and hopefully my kids will live in, I feel like my vote could count toward that, where we could see a safe and equitable place for everybody."

To Be Active In The Political Process

"I've voted every year that I could since I turned 18. It’s important to me," Christine Bindner, 29, says. "I think voicing our opinions, that’s how we keep our democracy alive and active, and in the last couple years I’ve just been really kind of fed up with politics, and this is one way to actively participate in that process."

"Just knowing that my voice has an impact and knowing that I can make change in policies that directly affect me and those that I love is what’s driving my desire to vote," Liera Bender, 21, tells Bustle. "One thing I’m really passionate about is obviously higher education and making sure that people who are in office really care about education and making sure that our public schools have the funding they need to be able to deliver the quality that students deserve."

To Get Someone In Office That Represents My Values

"I’m sick of all the racism," Kara Themistol, 24, says. "I’m just ready for a change, for someone that represents my values. I want to see someone that loves people for people and not because of the color of their skin or anything like that. Someone that sees America as multicultural, multi-faceted, there’s more to us than just one race."

To Set A Good Example

"I am actually a 7th grade social studies teacher. A really big part of what I teach my 7th graders is to be civically responsible and to be an active citizen," Samantha McCarville, 29, says. "And if I don’t vote, I can’t go and teach my students that that’s really, really important. So I have to be a good example, but also, voting is really critical for making sure our democracy is still intact."

To Fix The Health Care System

"I’m a physician, but also running for the Iowa House," Megan Srinivas, 31, says. "Watching [my patients] suffer from the health care system in our state that has really devolved, where Fort Dodge has been cut out of receiving most of the health care resources we did when I was growing up — especially mental health resources — and putting my patients in a position where health care is becoming unaffordable and unattainable. That has made me say that I need to stand up and get involved to fix this health care system."

"I vote every year, but it’s especially important to me this year because of my children," Sarah Reiter Cheely, 33, says. "I don’t want them growing up in a state that keeps electing someone who I view as a white supremacist to office. My children are half Black and I worry about how they’ll be treated in the district that we live in."

To Make Everyone Feel Respected And Heard

"I just want to see people understand and know the truth, and nationally, I would like to see everybody get along," Sylvia Pedersen, 29, says. "I know that sounds impossible but I’d just like ... I feel like everybody in the world should feel respected and heard, and I don’t see that happening in today’s world."

For My Future Kids To Grow Up In A Better Environment

"I recently just became a citizen, so that was a huge process for me. But I’m glad it was done because now I’m able to vote, and my vote counts now," Julie Uwineza, 20, says. "For me, what [stands] out the most is the environmental issues. We have a president who doesn’t believe in [climate change] ... he’s cutting away all the funding to improve global warming, which is really hard, and that really speaks to me most, because I need my kids to grow up in a better environment."

To Help Myself And Others Who Are Struggling

"As Americans, we need to help each other out and care for other people," Megan Solberg, 26, says. "I’m a community health nurse, and I’ve seen patients struggling to get access to health care. Also I’m swimming in student debt. I not only want to help myself, but others, too, by voting."

To Take Care Of My Parents

"My parents are older, and I’m an only child, so a lot of that responsibility falls on me. It’s just scary what might happen to them if things keep going the way they are," Karen Vogel, 24, says. "I just want a guarantee that they can live even decent lives at home for as long as they can, and I don’t have to take them to a facility. I takes a lot of money to put parents in facilities like that. … So that’s all I want to do for them, because I am an only child, so how am I supposed to take care of them?"

To Have A Say In My Government

"At least I know I’ll have a say in my government," Joezel Noriega, 18, says. "It's a pretty important thing, because you get to decide who’s going to run your government and then you get to pretty much get a say as to what opinions are going to be out there and what policies are going to be put in place by voting for who you think is right for the position."

More like this
Romance Authors Are Mobilizing For Reproductive Rights
By Natalia Perez-Gonzalez
Black History Month UK’s 2022 Theme Calls For Action, Not Words
By Maxine Harrison
12 Must-Watch Documentaries To Honour Black History Month UK
By Sophie McEvoy
Mel B Speaks Out Against Domestic Violence In A Powerful Speech
By Sophie McEvoy
Get Even More From Bustle — Sign Up For The Newsletter