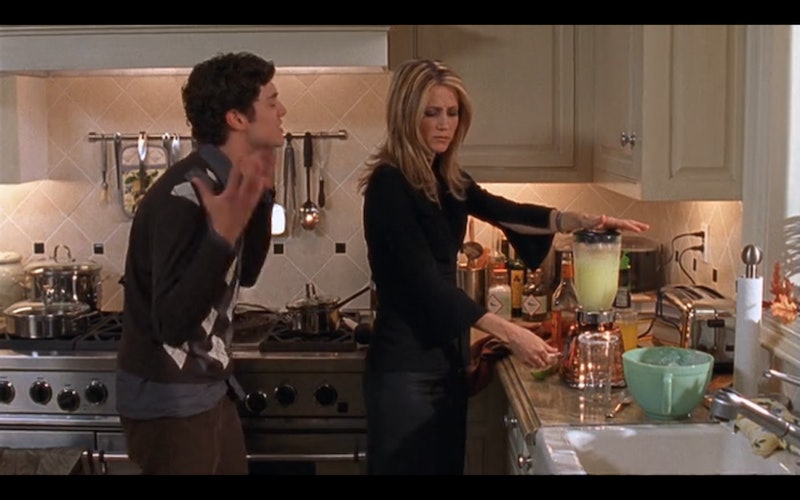 One of the first things that probably comes to mind when you think of The O.C. is Chrismukkah, the double duty holiday that Seth Cohen loves more than comic books, Death Cab for Cutie, and the idea of leaving Newport combined. But when it comes to holiday episodes, The O.C. is a lot more than just Chrismukkah. Throughout the series' four seasons and 92 episodes, 14 episodes were devoted to holidays. From Thanksgiving to Groundhog Day (yes, really), The O.C. knew how to combine any big day with humor, romance, and dramatic twists (Caleb has a secret love child, anyone?).

So, when it comes to the early 2000s series' takes on a variety of holidays, where does each episode stand? How did The O.C. do when pairing Valentine's Day with a sudden and horrific death, Thanksgiving with a drinking problem, or Chrismukkah with a bar mitz-vahkkah? Was everything totally successful or did Marissa's new friends and Chris Pratt sometimes get in the way? Does anything from Seasons 3 and 4 rank above anything from Season 1 and 2? These questions and more are answered below in a ranking of all 14 O.C. holiday episodes.

Yes, there was a Groundhog Day episode of The O.C. in which Che gets Seth to help him save a groundhog. I mean, honestly, can you remember this one at all?

It's a Valentine's Day episode all about death (Johnny's, in case you forgot). One bright spot is Sandy and Seth mixing up the lingerie they bought for Kirsten and Summer, respectively. Also, if you liked Ryan and Sadie together, this is their first meeting.

Seth, Summer, Ryan, and Taylor go to Las Vegas, and there's a pregnancy test mystery that leads Seth to propose to Summer in a really awkward way. New Match becoming an escort service for women who are into younger men is a highlight, because — surprise — Julie Cooper is always a highlight. A negative is how much Summer and Taylor mishandle the pregnancy test — it's supposed to be left on a flat surface!

Things are really starting to fall together for the series finale in this one: Kirsten is pregnant, Summer and Seth are figuring out if they're really meant to be in the long run, a lot of stuff is going on with Ryan's dad, Kevin Sorbo. Oh, and it's Valentine's Day. This one does have some sweet moments with the series' two best couples — Seth/Summer, Kirsten/Sandy — which gives it a boost.

This was the hardest episode to rank. Ryan and Taylor both go into a coma after falling off of a ladder, which is so ridiculous. But, it is kind of fun to see an alternative reality where Summer only wears velour tracksuits and is engaged to a preppy Chris Pratt — I mean, Che... I mean, Chester.

Summer and Marissa aren't dating Seth and Ryan at this point, but they're still invited to the Cohen family Chrismukkah where everyone finds out that Caleb has a secret child, Lindsay, who is dating Ryan. It's... a lot.

Johnny got hit by a car, potentially ruining his surfing career, so the gang decides to throw a bar mitzvah for Ryan with the idea being that he can give the gift money he receives to Johnny for his surgery. It's a lot to ask Ryan seeing as he doesn't even like Johnny, but it ends up bringing some pretty sweet moments, including Seth feeling like he's getting a do-over of his own bar mitzvah, and Ryan's speech about the Cohens. This episode also has trailer park Julie Cooper!

The best thing about this episode is Julie and Marissa's relationship, because they are both at their conniving best. Julie is trying to make the most financially out of her relationship with Caleb, and Marissa is screwing with Julie's mind. (Her new girlfriend, Alex, helps her out on that front.) The worst thing about this episode is everything else: Seth being his most obnoxious self while promoting the comic book with Zack and Summer, Sandy kissing Rebecca, and Ryan dealing with Lindsay and Caleb. Boo, Cohen men!

It's a Thanksgiving episode all about Volchok, but it handles people's reactions to Marissa's death in a satisfying way; Summer can't handle being back in Newport, and Julie has a nice moment with Ryan where she asks him to tell her about the Marissa she didn't know.

Sandy's mom is in town for Passover and everyone is like, "Huh? Why is she being nice?" Turns out, it's because she has cancer and wants to make the most of her time wit them. The highlight of this one is a lovely emotional moment between Seth and his grandma about the fragility of life.

In this first (and best) Valentine's Day episode, Seth and Summer decide to lose their virginity to each other, Julie and Luke hookup, and the Marissa/Ryan/Theresa triangle of trust issues keeps moving full steam ahead. Bonus points for how strongly Julie's Bob Seger love is represented in this one.

This, the first of the two Thanksgiving episodes in the series, gives us a classic "he's hiding two women from each other, hijinks ensue" situation when both Summer and Anna come to the Cohen house for Thanksgiving. (Surprise! They later find each other.) This episode also brings us Ryan and Marissa helping imprisoned Trey move a stolen car, the introduction of Theresa, and the strongest hint yet at Kirsten's alcoholism when she blends up that classic Thanksgiving beverage: frozen margaritas. This is classic O.C. Season 1 in that it had so much going on, with every bit of it helping move the story forward, and for that it gets a high place on the list.

This episode is so good, and it's such a fun one that some people have made a tradition of watching it while getting ready each New Year's Eve... Hailey shows up at the Cohen house and throws a giant bash. Sandy and Kirsten go to a swingers party. Ryan makes a mission of getting to Oliver's celebration right before midnight to kiss Marissa and tell her he loves her. Ryan slow motion running up to Marissa while Finley Quaye's "Dice" played was almost enough to give this the number one spot, but...

Anna gives Seth a homemade comic book. Summer gives Seth herself dressed as Wonder Woman. Seth tries to give them both the Seth Cohen Starter Pack. Marissa steals from the mall. Ryan has, perhaps, his best line ever when he throws Marissa's vodka bottle, repeatedly slams the car door, and says, "You're scaring me." Chrismukkah became a classic O.C. event for a reason and this episode set it off. It truly has it all, including (ugh) the introduction of Oliver at the very end.

Regardless of what time of year it is, The O.C. has a relevant holiday episode, so there's always a good excuse for a re-watch. Just, you know, no pressure to watch that Groundhog Day one.