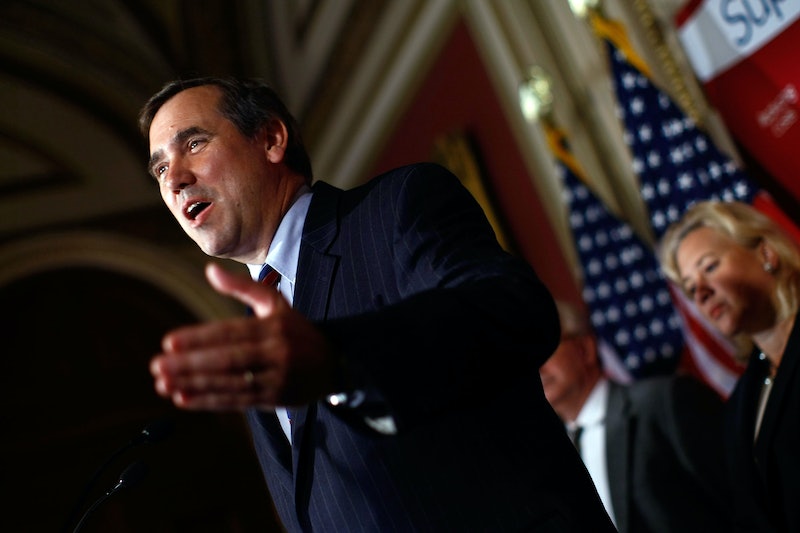 On Tuesday evening, Democratic Sen. Jeff Merkley of Oregon took the Senate floor to begin a protest against the nomination of Neil Gorsuch for Supreme Court justice. As of this writing, Merkley has been speaking for approximately ten hours non-stop. Twitter users have begun sending Merkley tweets of praise tagged with "hold the floor" as he continues his impressive protest, with some users indicating that they plan to stay up all night to watch the historic event.

Merkley is protesting the highly controversial nomination of Gorsuch to the Supreme Court, because he perceives the seat as belonging to Barack Obama's nominee, Merrick Garland. Garland's nomination was held up by Republicans for a year (until the end of Obama's presidency) and he was repeatedly denied the chance to even have a confirmation hearing. Beyond Gorsuch's nomination, Merkley is also protesting the Republicans' threat to invoke the "nuclear option" to secure enough votes for Gorsuch's nomination. This option would permanently change Senate rules to require only a simple majority for Supreme Court justice nominations as opposed to a 60-vote minimum.

Merkley is spending his time on the floor addressing these issues and encouraging the Senate to make a return to bipartisanship. His protest is quite intriguing to watch, and many Twitter users are showering him with praise for his courageous and impressive stand against Gorsuch's nomination.

This Twitter user compares Merkley's stand to that of the revered To Kill A Mockingbird lawyer, Atticus Finch.

This Twitter user refers to Merkley as her "hero" and praises him for staying strong on the Senate floor.

A Twitter user thanks Merkley for honoring Garland (and acknowledging his thwarted nomination) through his Senate floor protest.

This Twitter user shared "bicep emojis" to illustrate their solidarity with Merkley in his quest to stop Gorsuch's nomination.

5. The Seat Was Stolen

This person passionately expressed their agreement with Merkley about the "stolen" status of Scalia's Supreme Court seat.

This person implements a twist on the "be the change you wish to see in the world" phrase to showcase her praise for Sen. Merkley and his protest.

Lots of people are praising Merkley's stamina and ability to continuously speak on the Senate floor for hours on end.

Merkley is also being thanked for expressing his worries about Gorsuch's nomination.

This woman shares a meme depicting her passionate support for Merkley's protest.

And others are admiring Merkley for his values and his decision to take a stand.

12. Making Too Much Sense

Merkley is getting lots of praise for how educational his "protest speech" is.

His performance is nothing short of bravery.

Some people plan to stay up all night along with Merkley to honor his venerable protest.

Maybe the Energizer Bunny will inspire Merkley to continue.

Overall, it is clear that many social media users are proud of Merkley for taking a stand against Gorsuch's nomination and plan to virtually stick by him throughout the night as he continues to hold the Senate floor. If you would like to join in on watching Merkely's protest, you can do so via this link to his Facebook page livestream.