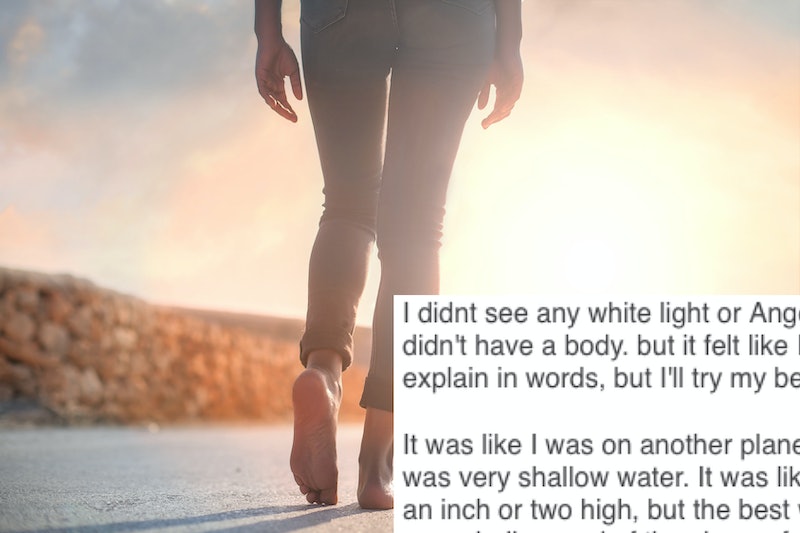 Stories about people dying and coming back to life grab our attention in a way that few other things do — and a lot of it has to do with what people see during near-death experiences. Even when people’s bodies or brains have technically shut down, those who are then resuscitated still frequently report experiencing everything from complete emptiness to vivid visions and sensory experiences. You only have to turn to Reddit to see the wealth of stories that exist in the world; from AskReddit threads to entire subreddits devoted entirely to the topic of NDEs, there’s no shortage of sources to consult in search of first-hand experiences about brushes with death. And for many of us, they are endlessly fascinating.

Exactly what a near-death experience is sort of depends on who you talk to. As Gideon Lichfield noted in an in-depth look at the science of NDEs in The Atlantic in 2015, scientists studying the phenomenon have explained them as being due to “oxygen shortage, imperfect anesthesia, and the body’s neurochemical responses to trauma”; however, wrote Lichfield, many in the “NDErs” or “experiencers” community made up of those who have actually had NDEs consider these explanations to be “inadequate.”

Where you fall on the spectrum likely has something to do with whether you’re religious or spiritual — although part of me also isn’t convinced that NDEs must necessarily be either a scientific, biological phenomenon or a spiritual one (and I say that as an extremely non-religious, mostly atheistic person myself). I wonder if they could be both: That is, whether NDEs can have both biological elements and spiritual ones. After all, your belief system shapes how you view and process the world; as such, even if an NDE is, from a technical standpoint, your body reacting to trauma, your belief system might also shape how you perceive the experience itself.

One Redditor, u/Magma151, made a stirring observation in one thread about NDES concerning the kinds of stories that get shared on Reddit. “I see two different answers here,” they wrote. “One is that they were trapped in a void of pure nothingness, not even awareness. Just black. The other is a state of pure peace [and] happiness, seeing loved ones and basking in the light.”

The most important part, though, is what they wrote next: “I think I like the latter, and that is what I will hope for in death,” they said. “And if I'm wrong, it's not like I would be disappointed. I wouldn't have the awareness to do so.” They finished, “I [would] rather live my life in hope of what's to come, rather than fear.”

And, I mean… same. Hope wins out over fear. Every time.

Here are 15 stories drawn from a variety of threads and subreddits about NDEs showing the wide range of things that people see during brushes with death. I think they’re worth reading, no matter what you believe in. Check out these other sources for more.

More like this
26 Ghost Story Podcasts To Get You Ready For Halloween
By Jessica Booth, Mia Mercado, JR Thorpe and Emma Carey
TikTok's Butter Board Might Be The New Cheese Plate
By Emma Carey
8 Completely Unserious Tips To Make Your Cuffing Season A Success
By Ginny Hogan
Why TikTok Is Flooded With Controversial Videos About "Pick Me Girls"
By Courtney Young
Get Even More From Bustle — Sign Up For The Newsletter