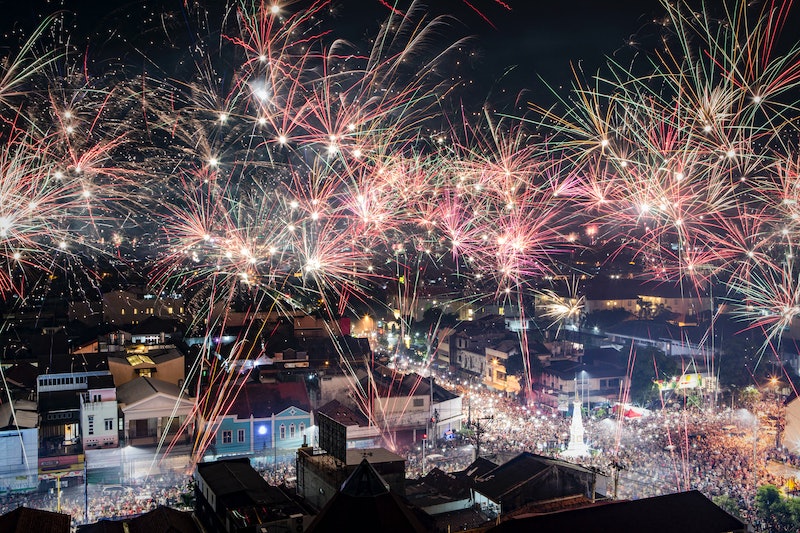 New Year's Eve is a great time for social media. We're all decked out in our sparkliest clothes, we're doing festive things, together with friends or loved ones — or enjoying a pajama party of one at home. But whatever we're doing, we're going to want to share it on Instagram, so to streamline your posting process, I've rounded up some funny New Year's Eve Instagram captions. You don't want to get lost in the shuffle of festive holiday posts just because you can't think of a caption and therefore can't post your picture. Don't waste a great shot or an opportunity to share with your friends and followers on one of the flashiest social media days of the year.

We all know the crippling frustration of not being able to pick a caption to go along with a great photo. Though a great picture will certainly get likes, a caption will give it personality so that it doesn't fall flat. So my feelings are: when in in doubt, use a funny quote. The selection of quotes that I've collected range from stand up comedy quotes that will make you laugh out loud to philosophical quotes that will make you chuckle modestly. Try them out with your pictures and see what works best.

"May all your troubles last as long as your New Year's resolutions!" - Joey Adams

“My New Year’s resolution? I will be less laz.”- Jim Gaffigan

"A New Year's resolution is something that goes in one year and out the other." - Unknown

“Making resolutions is a cleansing ritual of self-assessment and repentance that demands personal honesty and, ultimately, reinforces humility. Breaking them is part of the cycle.”- Eric Zorn

“Each year’s regrets are envelopes in which messages of hope are found for the New Year.” – John R. Dallas Jr.

"I think in terms of the day’s resolutions, not the years’." - Henry Moore

"New Year’s Day: Now is the accepted time to make your regular annual good resolutions. Next week you can begin paving hell with them as usual.” - Mark Twain

“It wouldn’t be New Year’s if I didn’t have regrets.” - William Thomas

"My new year's resolution this year is to make a resolution that I can actually keep, like drink a glass of water before bed, tonight." - Unknown

“New Year’s Resolution: To tolerate fools more gladly, provided this doesn’t encourage them to take up more of my time.” - James Agate

“Cheers to a New Year and another chance for us to get it right.” -Oprah Winfrey

“I would say happy New Year but it’s not happy; it’s exactly the same as last year except colder.”- Robert Clark