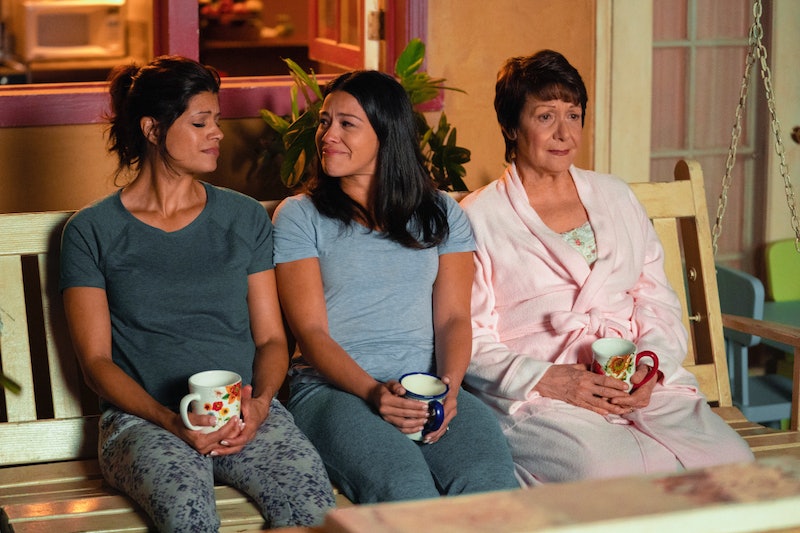 The final season of Jane the Virgin is almost at an end, which is bound to make fans feel a little nostalgia and look back on all of the years of memories this show has helped to create for both the characters and viewers alike. And while the telenovela-esque plot twists always made sure to keep us on our toes, it was ultimately the relationships on Jane the Virgin that made the series so special. Cliffhangers are all well and good, but the heart of this show always stemmed from the friendships and love stories that grew and developed over the seasons. And it'll be that aspect of the series that will be so difficult to part with.

The central love triangle of Jane the Virgin was always between Jane, Michael, and Rafael, but when you stop and think about it, this show introduced so many other unforgettable relationships and dynamics along the way that proved to be just as important. So in honor of the series coming to a close, let's take some time to look back on all the relationships these characters have experienced and rank them from forgettable flings to epic romances to see which connections packed the most significant punch.

This telenovela actor may have been easy on the eyes, but he proved to be a real jerk to Jane in the end. The only good thing to really come out of this relationship was that it allowed Jane to open up to the idea of being intimate with someone again after Michael's death, which helped her to move on in the grieving process. Other than that, though, this guy was a complete disappointment.

Mother-daughter relationships can be complicated, but this one really takes that concept and runs with it. Between all the blackmailing and scheming, this relationship has always been toxic, but has helped serve an important reminder for Petra that no one is doomed to become their parents if they don't want to be.

Dennis may have been there for Jane after Michael died, but their brief dating experience proved to be a total flop that never really amounted to anything except awkwardness.

If you recall, Jane attempted to date both Sam and Michael at the same time, which didn't exactly work out very well. But given the strong connection Jane and Michael instantly shared, this poor guy never even stood a chance.

Adam was an old love interest of Jane's who came back into her life when she needed it most. While things didn't end up working out, you could tell this guy truly cared about her and that they had once shared something very special.

This relationship was always super complicated, given that they were both in love with the same woman the majority of the time. But there's no denying at underneath it all, they were both decent guys who wanted the best for Jane and that deserves to be acknowledged.

Impossible not to fall in love with this bromance. Rogelio would never forgive us.

JR was the first person to make Petra truly happy and inspired her to want to become a better person. It may not have worked out between the two of them, but it forever changed Petra's outlook on the type of love she deserves to hold out for.

These two are a shining example of you can fall in love at any age. It's never too late to find that special someone in your life.

If this was strictly about their romantic history, they would be ranked much further down the line than this, but their relationship has grown into such a beautiful friendship it has earned the right to be near the top of the heap. They lean on one another in times of need and trust each other completely. Not everyone can go on to share such a strong bond with their ex, but these two somehow manage to make it work.

These two have come so far in their father-daughter relationship. They've hit a few snags along the way, but there's no denying how much love they have for each other.

From cancer scares to major career changes, these two have been through so much together and their love has never faltered. They're a ship built to last against any storm that comes their way.

Raf may not have been the one Jane originally thought she'd be spending her life with, but now she can't imagine a life without him as her friend, lover, and overall partner. They know each other completely and share a son together. These two are solid and have proven to be a great match.

Team Rafael fans may not like that Michael's relationship with Jane ranks higher on this list, but sorry not sorry. Jane did choose Michael first and if Rose hadn't intervened, these two would still be happily married. Their love was undeniable and the romantic moments they shared were truly fairytale worthy. There's simply no beating that.

As epic as the romantic relationships of this series have been, the female friendships have been at the core of it all and the glue that has held this narrative together. Love stories are all well and good, but being able to share a good cry with your family on the front porch of you house? Priceless.

Say what you want, but this is the true love story of the show. To watch these two go from enemies to best friends has been truly remarkable and a refreshing perspective on female character dynamics. Instead of knocking each other down, they help lift each other up in all aspects of life, ranging from love and career advice to the many struggles of motherhood.

So as sad as it will be to say goodbye to this show, these characters and the relationships they created are sure to stay with us forever.