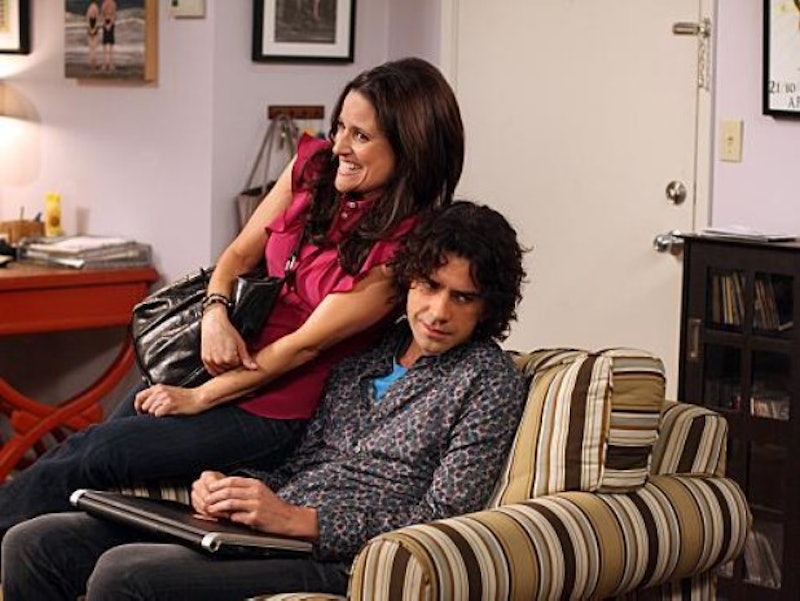 Though Julia Louis-Dreyfus found immense success and acclaim with Veep, her shorter-lived CBS sitcom was also a total gem. Some of the best New Adventures of Old Christine quotes are the ones that are universal. Or, to be more specific, the ones that you can flavor any conversation with when you want to sound wittier and more sarcastic than you really are.

The show was packed with hilarious one-liners and unforgettable responses for every day situations that everyone can relate to. Christine, like all of us, was struggling to keep her crazy life together. But, unlike the rest of us, she was always ready with a funny quip to take the normal situation from "blah blah blah" to "ha ha ha." Though her bestie Barb and her brother Matthew had a number of laugh-out-loud moments, Christine usually delivered the hardest punches time and time again, often because she remained blissfully unaware of just how extraordinary she was in this ordinary world.

So, partly as an ode to the goofiness that was Old Christine, here are some of her most memorable quotes that you can easily tweak to use in your own lives and, hopefully, make them even more entertaining.

1. When You're Trying To Make Learning Sound Fun

Perspective is everything. Even if you know the situation you're about to get into is education-oriented, that doesn't mean it needs to be boring.

2. When You Gain Confidence Through Baby Steps

Self-help gurus always say to count your blessings. By listing out what you have your life, you can remind yourself of all the things you can already be happy about. And, sure, that can include that body pillow that keeps you warm and cuddles with you every night.

3. When You Let Your Body Outweigh Your Brain

Everyone has been there, but, hey, when you've got a good sense of humor you're allowed to make some mistakes.

4. When You're Conflicted About The Patriarchy

Unwanted compliments are obviously unwanted. But sometimes you wouldn't mind a little notice from a stranger. Christine perfectly describes that inner turmoil in the funniest possible way.

5. When You're Trying To Be Polite But Don't Understand Why Everyone Insists On Wasting Your Time

There's only so much of one story you can take. And, though most polite society would frown upon it, sometimes you just want to ask how much longer this person is going to be talking before you can move on with your life.

6. When You Try To Save Some Money And It Backfires

Sometimes cutting cost corners seems like the best idea. And sometimes you learn the hard way that one man's trash is also another man's trash, even though he thinks it's treasure.

7. When You Want To Be There For Your Bestie, But You're Impatient

Sometimes you make complaints about even your most beloved friends that you don't realize are insensitive. Then again, time is money.

8. When You're Willing To Admit You Peaked In High School

You're allowed to still consider your high school best friend a close friend, even if you haven't spoken in years...

9. When You're Having A Bad Day

Hyperbole is the spice of life.

10. When You Want To Convey You May Not Be Cut Out For Parenting

Leaving your child in his bassinet for three years is obviously a terrible idea, but Ritchie turned out OK, so no harm no foul, right?

11. When The Laundry Struggle Is Real

There are weeks when you simply don't have or want to make time to do your laundry.

12. When You Realize You've Been Using That Mysterious Bathroom Contraption Incorrectly

Living with other people isn't always a walk in the park. You never know what kind of grooming habits — or contraptions — your roommate might have.

13. When You're Trying To Keep It Together

Even if you're not feeling OK at the moment, it can be helpful to talk yourself out of the tail spin you're about to go into.

14. When You're Trying To Better Yourself Even Though No One Appreciates It

Not all of us are gifted planners.

15. When You're Blissfully Unaware That Someone's Calling You Out

While you may be trying to make someone see a situation from your perspective, they're always going to see it from theirs. And, at least in the case of Christine, sometimes theirs is hilarious.

16. When You Research TV Quotes To Help Other People

If you're willing to let TV characters spread knowledge to you while telling you jokes, great. But if you just want to enjoy it for the playful entertainment it is, that works, too.

There's all the proof you need to show that Old Christine quotes never get old.

More like this
On 'The Handmaid’s Tale,' Christine Ko Fights Back
By Gretchen Smail
Kaley Cuoco Was Set Up With Her New Boyfriend Tom Pelphrey By Her Manager
By Hugh McIntyre and Jake Viswanath
Helen Mirren Reacts To Queen Elizabeth II’s Death After Playing Her 15 Years Ago
By Grace Wehniainen and Radhika Menon
18 Principal Ava Quotes That Prove She's The Queen Of Shade On 'Abbott Elementary'
By Grace Wehniainen
Get Even More From Bustle — Sign Up For The Newsletter