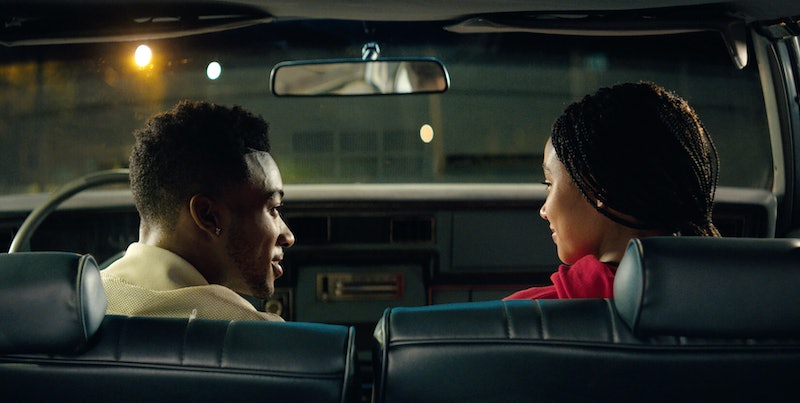 Every month is a great opportunity to celebrate women and the strides they're making in the entertainment business. Though it's well known that female filmmakers and screenwriters are vastly underrepresented in the industry, that's exactly why it's important to highlight and support women doing great things in film. The October 2018 movies that are directed and written by women run the gamut from a big-screen bestselling novel adaptation to a quiet relationship drama premiering on Netflix. And the stories are varied and compelling too — because that's what happens when you have a variety of voices making content.

2018 has been a great year for women in the filmmaking world. We've seen artists flourishing in front and behind the scenes in movies such as A Simple Favor, Blockers, A Wrinkle In Time, and The Spy Who Dumped Me. And that's just to name a few. But 2019 hasn't arrived yet, so here's what should be on your theater and streaming docket this month. Raising the profile of these films will only help to ensure that more female filmmakers have the chance to tell their stories in the future. And one of your new favorites might be among these five upcoming releases.

Starr Carter (Amandla Stenberg) finds herself in a constant code switch, moving between two worlds. While she lives in a poor, mostly black neighborhood, she attends a wealthy, mostly white prep school. Her double life is upending when she witnesses the fatal shooting of her childhood best friend at the hands of a local police officer. The Hate You Give screenplay was written by writer and director Audrey Wells, known for her work Under the Tuscan Sun, Shall We Dance and George of the Jungle. Angie Thomas wrote the bestselling novel the film is based on.

Film director Amanda Kopp co-directed this animated film based on stories from young storytellers in Swaziland about AIDS, alcoholism, kidnapping and rape.

Directed and written by Megan Griffiths, the comedy Sadie is the darkly funny story of a young girl (Sophia Mitri Schloss) who will stop at nothing to preserve her father's dignity.

Directed by Chantelle Squires, Jane and Emma follows Jane (Danielle Deadwyler) a black woman who walks hundreds of miles to meet Joseph Smith (Brad Schmidt), a revered cleric. But, when Smith gets in trouble with a local gang, Jane offers comfort to his wife Emma (Emily Goss) in her time of need.

Co-directed and co-written by Hannah Marks, After Everything is a dramedy about a young couple (Jeremy Allen White and Maika Monroe) fighting through the trials an tribulations that come with a cancer diagnosis.

Co-written by Ann McElhinney, this film is based on the true story of the investigation and trial of Dr. Kermit Gosnell. The former doctor attempted to cover up his 30 year killing spree by establishing a political and media establishment just to cover his crimes up.

Polly Draper wrote, directs, and stars in this comedy about two brothers (Nate and Alex Wolff) who find out they are in love with the same girl (Paulina Singer).

The Kindergarten Teacher is written and directed by Sara Colangelo and follows an elementary school teacher who sees great potential in one of her 5-year-old students and does absolutely everything she can protect his talent.

Directed by Marielle Heller (The Diary of a Teenage Girl), Can You Forgive Me? follows a celebrity biographer named Lee Israel (Melissa McCarthy) whose career thrives off of profiling famous people like Katharine Hepburn and Estee Lauder. But, when she starts struggling to be published, she begins to plagiarize and sell "vintage" letters. Nicole Holofcener, director of Enough Said and Please Give, co-wrote the screenplay.

Change In The Air is directed by filmmaker Dianne Dreyer and written by Audra Gorman. The main character is a young woman (Rachel Brosnahan) who moves into what seems like a quiet reserved neighborhood, but soon finds out that she lives in a community of people who all have hidden secrets.

Actor Melanie Laurent directed this film about a drunken criminal hit man (Ben Foster) who gets double-crossed by his boss and soon finds himself on the run with a young woman (Elle Fanning) and her daughter as they try to find safety in Galveston, Texas.

Directed by Alexandria Bombach, On Her Shoulders is a documentary about Nadia Murad, a 23 year-old Yazidi genocide and ISIS sexual slavery survivor. The film documents her journey of advocacy as she becomes the voice of her people through her deadly life experience.

Walk of Shame actor Elizabeth Chomko wrote and directed this film starring Hillary Swank, who plays a woman dealing with the realities of her parents' suffering with Alzheimer's disease.

Big Sick star Zoe Kazan co-wrote the screenplay for this film, which stars Jake Gyllenhaal, Carey Mulligan and Ed Oxenbould. The story centers around a young couple whose 14 year-old son has to come to terms with becoming an adult after his father decides to fight a wildfire near the Canadian border.

Cheryl McKay, known for writing films Taylor's Wall and The Ultimate Life, co-wrote the screenplay for this film about an Army chaplain Darren Turner (Justin Bruening) who receives orders to deploy to Iraq immediately. His wife (Sarah Drew) is left at home tending to their three young children. When he returns home from overseas he must fight a battle to save his marriage.

Iranian-American filmmaker Maryam Keshavarz co-wrote and directed this film about a nurse (Susan Sarandon) struggling to free her journalist son (Julian Morris) who was captured by a terrorist group overseas. Running into some major setbacks, her only hope is a community of underground journalists and advocates who try to help her.

While it's unfortunate that this list isn't longer, you still have plenty of opportunities to gather your friends and support women making moves behind the scenes.

CORRECTION: This piece previously misstated Elizabeth Chomko's involvement in Walk of Shame; it has been updated to state that she acted in the film.