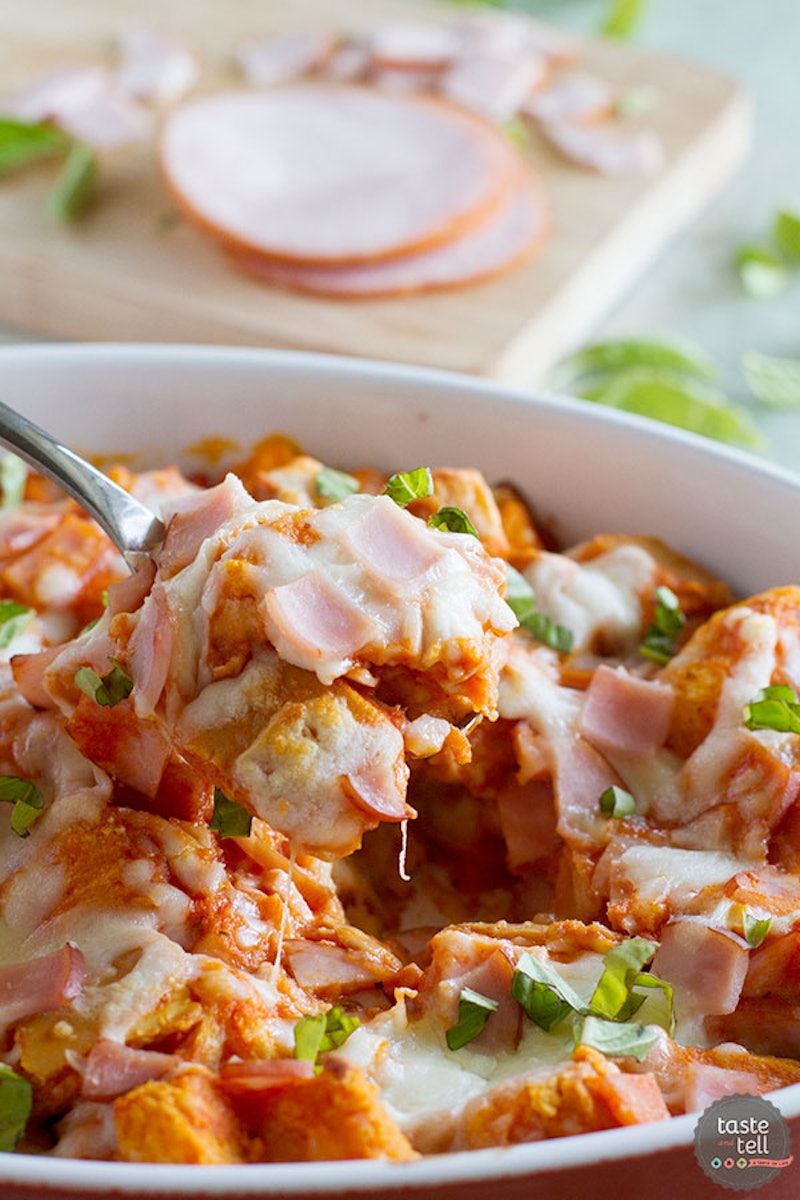 Some may call it stuffing while others prefer to use the term "dressing." Whatever you name it, or however you prepare it, it's one of Thanksgiving's most coveted dishes. Maybe some years, one or two classic dishes like the Brussels sprouts or Grandma's Mac n' cheese are left off the menu — but the stuffing dish (or dishes) is non-negotiable. If the kitchen is getting crowded and the top cooks in your family are overwhelmed, you can help out with easy stuffing recipes for Thanksgiving 2017. It doesn't take too much to throw together, especially if you're not preparing it all up in a turkey's — you know — grill.

Every family has their own preferred texture of the side dish that is, come on now, more like a main entree on the Thanksgiving table. My plate is definitely more than 34 percent stuffing after buffet round number one. If I'm being honest here, I don't mind it when stuffing is soggy. It reminds me of croutons soaked in a soup — an edible sponge packed with the luscious flavors of turkey and soft vegetables. But others prefer a bit more crunch and a heaping of vegetables, or bursts of tartness provided by dried cranberries. However you like your stuffing, there is good news: You can whip up a batch with hardly any effort. Once you know the ways, you can cook up a little bit of Thanksgiving any day of the year.

This recipe by Half Baked Harvest might call for more ingredients than your usual grocery shopping list, but you can put it together easily. You won't dirty too many dishes in the process and you'll get a delicious stuffing to pass around.

Stuffing in general isn't as complicated as the turkey to throw together. Averie Cook's traditional stuffing will bring familiarity to the table that everyone will enjoy. The best part is that this recipe won't make you break into a nervous sweat.

The walnuts in this stuffing will add a satisfying crunch to every bite along with an additional texture to play around with. Meanwhile, the cranberries contribute another layer of something extra to the dish. Every loaded bite from this recipe by Foodie Crush will have you wishing stuffing was served on the regular.

OK, this recipe by Damn Delicious, barely requires use of the oven. But in order to serve warm and ready, you'll have to make this just before everybody is about to take their seat.

Slow cookers can be an overwhelmed home chef's best sous chef. If you own one of these bad boys, all you have to do is toss together the recipe by Averie Cooks and let magic happen.

Challah bread makes for excellent French Toast. It's no surprise that it provides a sweet base for stuffing. Tori Avey shows you how to conquer this recipe with step by step pictures so you'll know you're on the right track.

Cooking For Keeps' simple recipe is one you'll want to make over and over again. Leeks tag on a little something extra to the usual use of onion. You'll mostly just let the oven do the work here.

The bulk of ingredients in this recipe by Mel's Kitchen Cafe are the herbs that'll really bring the dish to life. So, don't be intimidated by the list! Putting it together is as easy as 1-2-toss.

Mom took over all the casserole dishes? That's okay. A Spicy Perspective is here to give you an idea on how you can use muffin tins to create single serving cups of stuffing. Tres fancy.

You'll want to make sure that you have some of this stuffing leftover for the next morning's breakfast.

If you're a fan of breakfast and can't stand to be without it at dinner time, this stuffing by Crepes of Wrath is for you. All you have to do is toss all the best ingredients together and let the oven do its thing.

This recipe by Inside BruCrew Life provides an ingredient list that's a bit more manageable, especially if you're leaving shopping until the last minute.

Everything that is good and tastes like fall can be found in a single casserole dish. Thanks to Savory Sweet Life, the dishes that sound complicated and gourmet aren't too difficult to pull together.

Though bread is typically the first ingredient you need to complete a stuffing dish, A Spicy Perspective rounded up the information that most people are adverse to the dish based on texture. Their resolution? Use orzo instead of bread!

Double the bread does not mean double the work, don't worry. How Sweet Eats makes things a little more interesting by using both cornbread and sourdough.

You'll only need 30 minutes to prepare this stuffing by Table For Two Blog, and it'll take 30 more minutes to cook meaning that's only an hour out of the day.

You read that right. Pizza stuffing. Hopefully the family is down for this less than traditional take on stuffing by Taste and Tell Blog. Hey, there's nothing wrong with trying something new, right? Just tell your family that you're grateful that they let you be you.