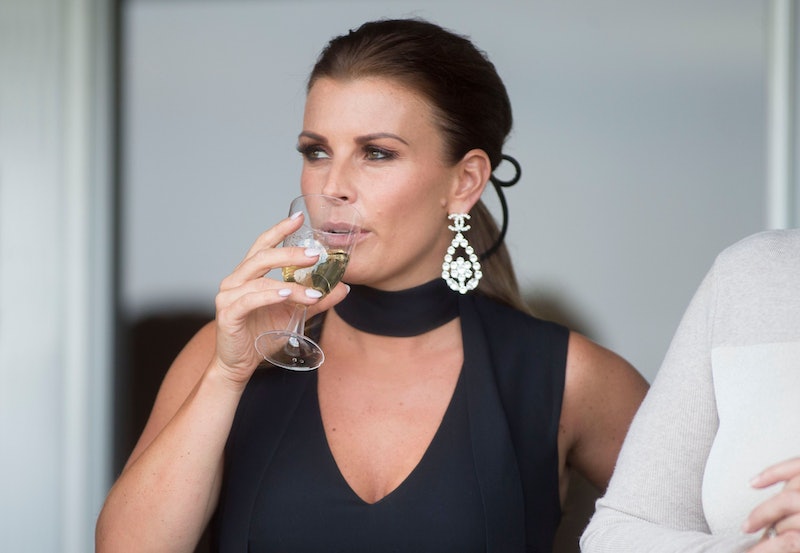 When it comes to two of the most recognisable faces on the sidelines of a premier league game, they don’t get much bigger than Coleen Rooney and Rebekah Vardy. And now the two well-known British celebrities have just gone to war on social media. When Rooney accused Vardy of selling fake stories about her, the internet went wild. Including, of course, endless memes. Here are a list of the very best Rooney and Vardy memes out there, because there's already too many to keep up with.

On Oct. 9, Rooney took to Twitter, speaking about stories that have been leaked to the Sun regarding everything from her basement flooding to family details. All of which people would only know from the stories on her private Instagram account, she says. And after much deduction and investigative work, she wrote: "I have saved and screenshotted all the original stories which clearly show just one person has viewed them. It's.......... Rebekah Vardy's account."

Shortly after, Vardy defended herself on her own social media and wrote: “Can’t believe I’m even having to write this. I’m pregnant and on holiday and am at a loss as to why she would do this. I’m now having to take legal advice as I can’t deal with this stress myself when I’m this pregnant.” She went on to write, “as I have just said to you on the phone, I wish you had called me if you thought this.”

Bustle reached out to reps for both Rooney and Vardy to see if they have any further comments on the situation other than what is already known. A spokesperson for Coleen told us: “It is irrefutable that the leaks came from one account, and one account only.” We have no yet heard from Vardy's team, but will update you if we do.

And other famous partners of football players are not staying out of the drama, with Danielle Lloyd commenting on Rooney's post with the rat emoji, ouch.

With a feud this high profile, social media has gone to town on the memes, and here's the best ones out there right now.

1. Firing up the notes app

Never mind spilling the tea, Rooney brought the fire when she took to her notes app and revealed the findings of her investigation. So if you can't stand the heat, get off Twitter ASAP.

You’ve got to hand it to her. Instead of jumping to conclusions Rooney seems to have really connected the dots.

The most iconic moment in Come Dine With Me history, where contestant Peter kicked off at winner Jane, has never been more applicable.

4. The distraction we deserve

Sick of Brexit? So is the rest of the nation. This feud may provide some sweet relief and you better believe the negotiations between team Vardy and team Rooney will be fierier than those happening in Brussels.

5. Almost too dramatic to be true

Why write a mystery novel when there's so much scandal in your own life?

6. The next Netflix hit

Even Netflix wants in on a bit of the action and when it comes to lifting the lid on real life drama it really serves us what we want.

Times are hard right now. Brexit has split the nation and it’s impossible to keep up with what's going on in Parliament. What we need is someone to unite us under one cause...

A combination of Celine Dion and pure British drams? A match made in meme heaven.

Were you missing the twists, turns, and dramatic revelations of Line of Duty? Not anymore you’re not.

If the claims are true, there must have been a fair few hours of research involved.

The magnifying glass and tweed hat isn’t a look many can pull off. But Rooney has committed to the cause.

Is “doing a Rebekah Vardy” going to become a thing now? Because we all need one to keep the Whatsapp group interesting.

We all have that one friend whose detective skills are second to none. Rooney AKA WAGagtha Christie has been hiding for too long.

Who needs Samantha, Miranda, Charlotte, and Carrie when you’ve got a private Instagram account, Rooney, and Vardy?

And she would have got away with it if it wasn’t for those pesky Insta settings.

16. The ending we wanted

In all honesty this is the real way Game Of Thrones should have ended. Give the people what they want.

17. The High Priestess Of Drama has spoken

The only appropriate reaction for the rest of today, tomorrow, and the foreseeable future. I don’t see this feud dying for a while.

There’s no knowing what will happen next with this public feud, but one thing's for sure: there’s going to be a lot more Rooney and Vardy memes to come.