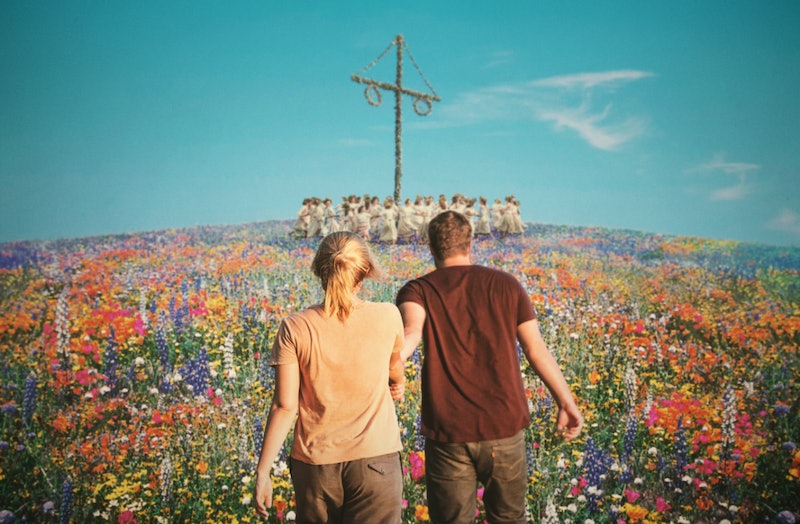 The new film from Midsommar has been terrifying and confusing audiences since its release on July 3, to the point where it has built up a considerable amount of buzz. The movie is so weird, and so scary, that some people can't bring themselves to watch it and instead opt to read the film's summary on Wikipedia. As it turns out, it's just one of the many Wikipedia movie summaries that will leave you terrified. Because while many lesser horror movies rely on jump scares to frighten their audiences, the really scary ones have to try a little harder.

The 17 films on the list below are unique among horror movies in that just reading about them is enough to scare you, gross you out, or leave you questioning what it was you just read. Indie studio A24 especially excels at this form of storytelling; as they mix classic horror, disturbing details, and a serious WTF factor together to make stories that are horrifying no matter how they're consumed. That's why the studio dominates this list with four entries, including the horrifying Midsommar. But they are hardly the only source for this type of readable horror, as the list contains films whose release dates span from 1968 to 2019. So take a look below to see which horror movies translate best to the scary Wikipedia summary format.

More like this
North West Will Make Her Acting Debut Alongside Mom Kim Kardashian
By Radhika Menon
Pamela Anderson’s Dating & Marriage History Could Be Its Own TV Series
By Jake Viswanath
Owen Thiele Asked Sundance Attendees About Films That Don’t Exist
By Grace Wehniainen
Jennifer Coolidge Hunted For Jewels & Lashes In J.Lo’s Hotel Room
By Jake Viswanath
Get Even More From Bustle — Sign Up For The Newsletter
From hair trends to relationship advice, our daily newsletter has everything you need to sound like a person who’s on TikTok, even if you aren’t.