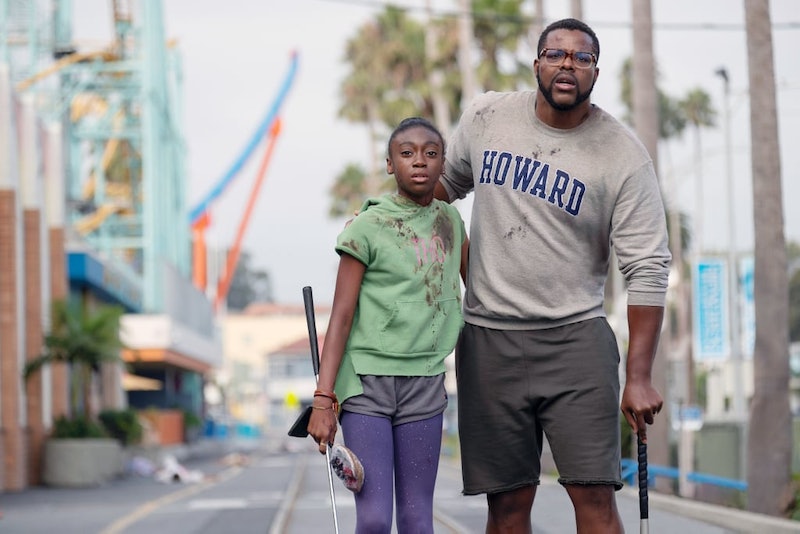 "Wait, so do they have sex?" I text my friend after she gets out of Us during opening weekend and iMessages me her snapshot review of Jordan Peele's newest horror movie. The "spill-your-soda scary" (according to Rolling Stone) film hit theaters nationwide this past weekend, making $70 million dollars in North America, receiving the parent-approved grade of 94 percent on Rotten Tomatoes, and breaking a bunch of records against other scary movies I never plan on seeing. Why? Because I once saw a screenshot of a particularly horrifying and stomach-churning scene from Hereditary and almost threw up. (It involves crawling. Pass.). And I also cried hysterically throughout the full hour and a half of The Strangers in high school. Basically, horror and I do not mix.

With that said, I work with a team of entertainment editors, on a site that values high- (and low-) brow cinema, and I knew I needed to know about this film. Plus, I'm genuinely curious! After consuming approximately nine million Us previews from SXSW and theories based on the trailers released (plus, spending 15 minutes on the "how scary is Us" Google search), I summed up that the answer to my latter question is "too scary for me." Slate clocked it in at scarier than Get Out, which I watched one year after it came out, on a very sunny morning, with the closed captioning on, and the sound low enough that I would have to focus on the words on screen and nothing else. (With that said, I am terrified to be in my long apartment hallway alone, often paralyzed with fear that someone is going to turn the corner and begin sprinting towards me and excuse it because of THEIR EXERCISES.)

But I truly do believe there is an audience out there — my people — who do not like horror movies, but like to know about horror movies. Which is why I often turn to Wikipedia summaries for details and plot lines I'd like to be able to discuss in public with friends, but not be scarred for life, upping therapy to thrice a week. So, I've compiled the questions I'd text you if we were friends and you had just seen Us and I had just finished reading the Wikipedia synopsis.

It should go without saying that this post is endlessly riddled with Wikipedia-grade spoilers, so shout out to the little elves that I imagine log on to Wikipedia the night a movie comes out to write these reviews with spoilers that are or are not completely accurate and certainly not thorough.

1. Why do children in this family keep such traumatizing experiences to themselves?

First off, I learned that young Adelaide, child-version of Lupita Nyong'o, runs off to a funhouse in the beginning of the film. Red flag numero uno, as they say in the biz. Kids shouldn't be running off to anywhere by themselves, much less a tented hall of mirrors. Naturally, because nothing good happens in a space where you see 47 different versions and angles of yourself, Adelaide meets her doppelgänger. Because I read all the way to the end of the summary, I also know that we got the CliffsNotes version of that interaction.

Keeping really creepy sh*t to ourselves seems to run in the family later on in the film, because Jason — child of adult-version Lupita Nyong'o — meets a bloody (?) man (?) on the beach (?), and verbally tells NO ONE.

2. Why the heck did Adelaide go back to this town, anyway?

Based on the summary, I don't see the allure of going back to this beach town knowing what went down there the first time. It would be like if the Blair Witch Project students went back to the woods after everything that happens in that movie (which I haven't seen, of course, but loosely know the plot from the Wikipedia) went down.

3. How do The Tethered get their names?

I appreciate the melodic names throughout the film; Adelaide, Zora, Gabe, Jason. But I am wondering, how do The Tethered get their names? Red, Pluto, Umbrae, and Abraham, where do those come from and what do they mean?

4. On that note, how did they get these names if they can't talk?

From my understanding there is grunting. And it is important?

5. Do The Tethered procreate?

Someone has to ask about Tethered sex! Is it a thing? Do the Tethered just coexist, walking around like Sims, until their counterparts have children and then *bing* Pluto is suddenly there and Red and Abraham are just like, "OK, guess we've got a kid now!"? Basically, is there "woo-hooing" involved?

6. How do The Tethered meet one another?

If they mimic their counterparts (human counterparts? Are they human, too? Wait, no, the government created them?), do they meet the same way their humans do? Do they go on dates? Are they even families/loved ones? Is there an eHarmony for The Tethered called To Have & To Tethered, where you can find your partner for life all for the low, low price of $49.99 a month (you're investing in YOUR FUTURE!).

7. What does dancing have to do with it?

I was a creative writing major, and love a metaphor, but the Wikipedia synopsis gives me zero info about the dancing that I've heard is somehow involved. Please explain.

8. Do The Tethered have jobs?

Just curious about the day-to-day of those below us.

9. Do The Tethered mimic their opposites above ground?

If I go to the kitchen and pour a cup of coffee, does my Tethered do the same thing? What's the vibe down there? No, right? Because that would mean that they wouldn't be able to rebel, unless this is some kind of Ex-Machina thing.

Surely the government wouldn't orchestrate such an elaborate doing without some type of fail-safe, right? Couldn't they stop them or is it Academy Award-winning Lupita Nyong'o's job to do everything around here?

11. Was "Red" waiting for Adelaide to return to the town so she could go after her?

Or, I guess was Adelaide waiting for Red to return? Can she only attack her when she returns to the town? Also, to circle back to the beginning: what is up with this town and its funhouses.

12. Can you only kill your opposite?

The Wikipedia says that each of the Tethered people separate their non-Tethered people from each other when they arrive at the house. Is this so they can kill them because they can only kill them? Or can Pluto kill Zora? Does he need to ask permission from Umbrae to kill her? Am I thinking way too much about it?

13. What does The Bible have to do with anything?

It says that Jeremiah 11:11 plays a role in the movie, so I Googled it, naturally. "'Behold, I will bring evil upon them, which they shall not be able to escape; and though they shall cry unto me, I will not hearken unto them,'" is what some man with a sign is referencing, which, like, sure! But what does it meeeeaaannnn?

14. Is Adelaide not Adelaide at the end? And does Jason know?

Sounds like Jason is really the mover and shaker of the family and He Knows What's Up with his mom.

15.-17.But if Adelaide is really a Tethered who shifted into just a normal human, that must mean that she is human? And can have sex and procreate? And is also capable of love? Maybe?

So did the government somehow clone people? How! Are! The! Tethered! Created!

19. What is the goal of The Tethered?

The government supposedly wanted to create The Tethered to control people, but control them how? Why? Were people above ground unruly?

If you've seen the movie and have answers so I can fully understand this motion picture, please hit me up. If you are Jordan Peele and have any information on the who/what/where/when/and why of Tethered sex and The Miracle Of Tethered Life, my DMs are open.