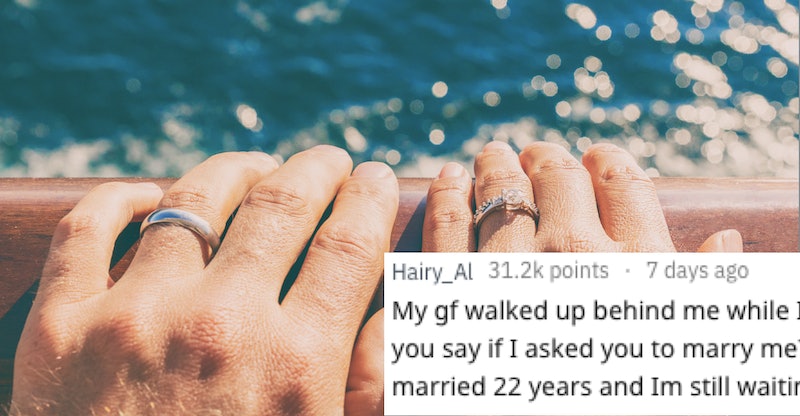 It's a tale as old as time: boy meets girl on Tinder. Boy and girl fall in love. Boy proposes to girl and makes sure it's Instagram-worthy because he knows that if he doesn't, he's going to hear about it later. In reality, the man's "job" of proposing to his girlfriend is 100 percent a social construct. Anyone can propose to anyone: man to woman, woman to man, man to man, woman to woman, person to houseplant, me to my dog. There are no rules. If you're curious how the fellas feel about this, these 18 men shared how they felt being proposed to by their partners — and their responses might surprise you.

There's this widespread belief that proposing to a man somehow emasculates him. A woman who pops the question is seen as desperate and aggressive. These stereotypes are no different than how a man who cries is weak and a woman who's the boss is automatically bossy. All of the above are works of fiction — gender stereotypes society came up with one day when we were really bored or something.

In fact, women proposing to men is so taboo that we've designated February 29 as the only day that you're allowed to do so. You know, February 29? That leap year thing that happens once every four years?

That's all you get, ladies. Once every four years.

In actuality, there's a good chance women should be proposing to their men more than we think. In a 2015 poll from Glamour, 33 percent of participants said "whoever has the guts" should propose. A whopping 70 percent said they'd be "psyched" if their girlfriend proposed.

And why wouldn't they be psyched? Can you imagine the stress men go under trying to plan the proposal, pick the right ring, and make sure everything goes according to plan? It's a lot to deal with. In case you had any doubts, one guy wore a heart monitor on the day he proposed, the results of which were shared on DailyMail.com. Sure enough, as he started to propose, there was a huge spike in his heart rate.

Maybe it's time for a change.

Because we don't often hear stories of men getting proposed to, though, let's see what these 18 guys have to say about it.