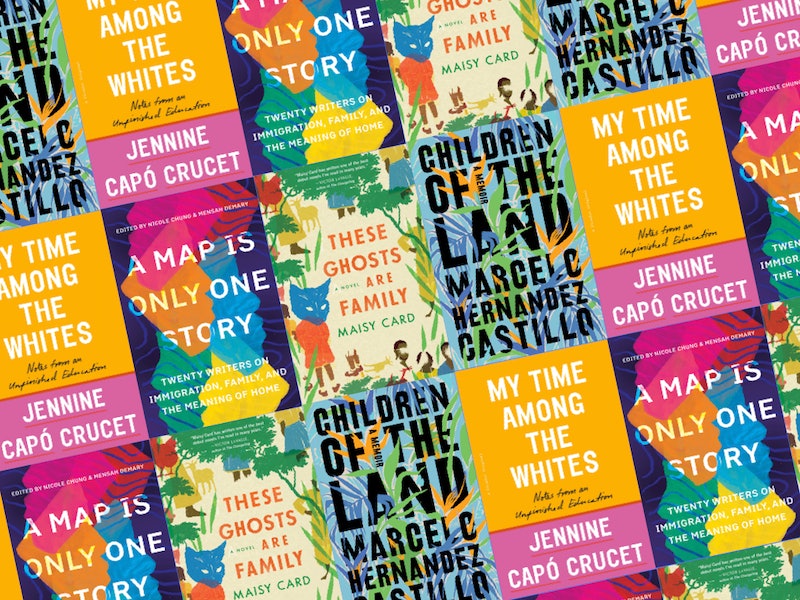 One new book has everyone talking about immigration stories and who gets to tell them. Recently, author Jeanine Cummins received a seven-figure advance for her upcoming novel, American Dirt, which tells the story of a Mexican mother forced to flee Acapulco with her young son when her husband lands in the sights of a cartel kingpin.

Critics have taken issue, not only with Cummins' problematic portrayals of Mexico and Mexicans, but also with the author's sudden identification with her Puerto Rican heritage. Cummins, who identified as white as recently as 2015, has rebranded as a Latinx author in promoting American Dirt — a book that Mexican-American author David Bowles called "harmful, appropriating, inaccurate, trauma-porn melodrama."

Additional criticism has pointed out the tone-deaf celebration of a barbed-wire aesthetic in promotional materials for American Dirt. Fashioned to resemble the book's cover, designs for the centerpieces at Cummins' book launch and the author's own manicure featured barbed wire — turning, in journalist Aura Bogado's words, a "symbol of oppression [into] a fashion statement."

The controversy surrounding American Dirt isn't likely to die down anytime soon. Until it does, here are 18 new books about borders and immigration you should read this year:

My Time Among the Whites: Notes from an Unfinished Education by Jennine Capó Crucet

Raised in Miami, Make Your Home Among Strangers author Jennine Capó Crucet grew up straddling cultures as the U.S.-born daughter of Cuban refugees who tried to assimilate with mainstream American culture. Exploring questions of identity and belonging, My Time Among the Whites is a must-read.

The Mariel Boatlift: A Cuban-American Journey by Victor Andres Triay

In 1980, two decades after the Cuban Revolution ended, more than 125,000 Cuban citizens fled their country seeking asylum in the U.S. Victor Andres Triay examines the history and legacy of the Mariel boatlift — named for the harbor from which the Cuban exiles set sail for Florida — in this new book, which features an exciting look into the misinformation campaign that painted Cuban refugees as murderers and thieves.

Six years after her father was arrested for selling watches to members of a Colombian drug cartel in New York, NPR correspondent Aarti Namdev Shahani founded Families for Freedom to help other immigrants fight back against unfair deportation policies. In Here We Are, she tells the story of her family, beginning with their 1981 immigration to the U.S. from India, including how her father's 1996 arrest changed the way she saw her country.

We've all seen how damaging the Trump administration's policies and rhetoric toward non-white immigrants have been, but individuals in the U.S. and abroad see only their public face. In Border Wars, Julie Hirschfeld Davis and Michael D. Shear reveal the immigration-related conversations and strategies happening inside the Trump White House.

America for Americans: A History of Xenophobia in the United States by Erika Lee

From The Making of Asian America author Erika Lee comes this new book analyzing the history of American xenophobia. Including everything from Chinese Exclusion to recent travel bans, America for Americans exposes the folly in arguments that position the U.S. as an eternally anti-racist society.

The No. 1 Amazon Best-Seller in Emigration & Immigration Law at the time of this writing, César Cuauhtémoc García Hernández's Migrating to Prison uncovers the history of U.S. immigrant detention, from the 1980s to the present.

Children of the Land by Marcelo Hernandéz Castillo (Jan. 28)

When he was 5 years old, Marcelo Hernandéz Castillo crossed the U.S.-Mexico border with his family, incurring stress-induced blindness. Although he regained his vision, the Children of the Land author spent a lot of time working not to be seen, trying to carve out a life as one of the country's millions of undocumented immigrants. His story is moving and all too necessary a read today.

If you feel like you went to sleep with a perfectly nice country and woke up in a hell-world where no one cares about people with skin darker than a Kleenex, start here. Elizabeth F. Cohen's Illegal not only traces the history of the Trump administration's policies, but also offers up new ideas for immigration reform.

An anthropological examination of border walls, Miguel Díaz-Barriga and Margaret E. Dorsey's Fencing in Democracy will challenge the way you think about national security. Until you get to read it, just ask yourself this: Does a fence keep others out or trap you in?

A Map Is Only One Story: Twenty Writers on Immigration, Family, and the Meaning of Home, edited by Nicole Chung and Mensah Demary (Feb. 11)

A collection of 20 essays on immigrant and immigration experiences, A Map Is Only One Story will move you with its global depictions of life across borders.

These Ghosts Are Family by Maisy Card (Mar. 3)

In Maisy Card's debut novel, an ailing man who has spent 30 years in hiding prepares to reconnect with his estranged daughter — a home health care worker who believes her father is dead. Why did Abel Paisley steal Stanford Solomon's identity and leave Jamaica for the UK, and what did his decision to start a new life do to the family he left behind?

From In the Time of the Butterflies author Julia Alvarez comes this new novel, her first in 15 years, about an immigrant writer whose life is turned upside down by a death, a disappearance, and the arrival of an undocumented teenage mother-to-be.

How Much of These Hills Is Gold by C Pam Zhang (Apr. 7)

Set in the American West during the 19th century, C Pam Zhang's How Much of These Hills Is Gold centers on Lucy and Sam — two young siblings whose parents' deaths force them onto a perilous journey. Setting out on a quest to bury their father's remains, Lucy and Sam travel across the lush and dangerous western landscape alone, finding out along the way what it means to belong.

No Justice in the Shadows: How America Criminalizes Immigrants by Alina Das (Apr. 14)

Every year, the U.S. deports some 300,000 "criminal aliens" under the guise of keeping American citizens safe. But are traffic offenses really worth forcing someone out of the country? And if not, how did we ever come to believe that they were? Alina Das lays out the history of America's escalating immigration problem in No Justice in the Shadows.

A story of family secrets told across North America, Ingrid Persaud's Love After Love centers on Solo, a Trinidadian-born immigrant who runs away from home to live undocumented in New York City after finding out a secret his mother has kept from him. His stepfather, Mr. Chetan, links mother and son together across thousands of miles, but he has his own secret that might break their long-held family bonds.

Set in the Pacific U.S. in the 1910s, Rishi Reddi's Passage West follows Ram, an Indian immigrant, as he travels from Oregon to California in search of work. In a precarious situation with a wife and baby to provide for back at home, Ram finds himself threatened by both increased hostility toward immigrants in the area and a burgeoning rivalry with his friend and co-worker Karak.

Conditional Citizens: On Belonging in America by Laila Lalami (Apr. 28)

The Other Immigrants author Laila Lalami returns in 2020 with Conditional Citizens, an exploration of what it means to be American today. In part a memoir that emerges from the author's experiences as a Moroccan-American immigrant, Lalami's new book also analyzes the legacy of white supremacy in enduring ideas about what makes someone an American.

One Mighty and Irresistible Tide: The Epic Struggle over American Immigration, 1924-1965 by Jia Lynn Yang (May 19)

In 1924, the U.S. government doubled down on its 42-year-old Chinese Exclusion Act with a new immigration policy that further restricted immigration from the East. For more than four decades, prominent American lawmakers tried to undo the Immigration Act of 1924, their efforts culminating in the 1965 Immigration and Nationality Act. Jia Lynn Yang's One Mighty and Irresistible Tide tells the story of that struggle.

More like this
The 'Firefly Lane' Book Ending Teases Way More Tears To Come In 2023
By K.W. Colyard
Steve Banerjee's Wife Irene Sold The Chippendales Brand Prior To Her Death
By Brad Witter
Casey Anthony’s Father Said He Was “Ready To Forgive Her” Before She Renewed Allegations
By Brad Witter
Allie Rowbottom Will Have Her Feminism With A Side of Botox
By Samantha Leach
Get Even More From Bustle — Sign Up For The Newsletter