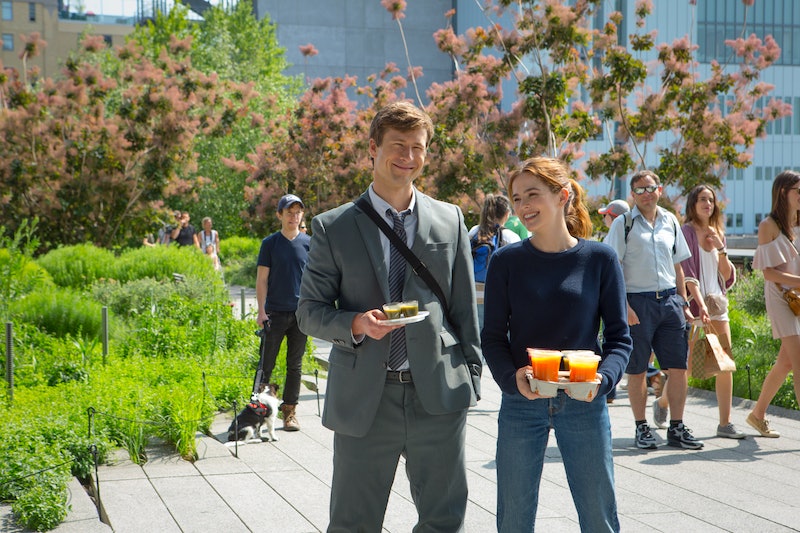 Have you heard? The rom-com is back. Netflix's original movie Set It Up hit the site on June 15, and it's already being lauded for "resurrect[ing] the modern rom-com," according to outlets like Rolling Stone. The praise poured in online from viewers and critics alike, as the charming movie about two assistants playing matchmaker for their bosses (and falling in love themselves) wooed audiences. Set It Up has all the iconic rom-com moments that audiences are used to, while still being a fresh, self-aware take on the genre.

For example, the film knows it's a rom-com and has jokes about meet cutes and references within references to the classic genre. This is what differentiates it from other Netflix takes on the romantic comedy. Like, A Christmas Prince was great, but no one can call that movie self aware. Set It Up, though, is self-aware while staying in a comfortable lane — a slightly quirky, but still conventionally attractive woman (Harper) meets a cocky, handsome man (Charlie). They hate each other at first, then become friends, then fall in love. That's a trope that's been done 100 times. But the acting is great, the writing is fun, the premise is cute, and the supporting cast is hilarious. (Pete Davidson and Tituss Burgess and Lucy Liu and Taye Diggs? Amazing.)

So, even though the movie's premise isn't entirely original, it feels comforting because it does hit all those classic rom-com notes while telling its own story. There's a reason people love this genre. Rom-coms know what they're doing, and their patterns are familiar, beloved, and iconic. Here's how Set It Up embraced that which came before.

From the upbeat opening song, to the quirky instrumental when we meet our leading lady, to the triumphant end credits song — the soundtrack could have been ripped from any number of classic romantic comedies. It's what helps ground this film firmly in the familiar genre.

A montage of assistants being mistreated and handed ridiculous tasks serves to show how hard Harper and fellow assistant (and soon to be lover) Charlie have it. It's also a move right out of The Devil Wears Prada — split screen and all.

If it's not set in New York, is it even a rom-com? Fortunately, Set It Up checks this box.

Harper stars as The Frustrated Journalist Who Has Bigger Dreams™ because she wants to be more than just an assistant at the sports site. She wants to write. Sound familiar? Andie Anderson from How To Lose A Guy In 10 Days is calling, because that's exactly her storyline. Andie was obsessed with basketball, while for Harper, it's baseball, but still. It's also worth noting that "journalist" is a pretty catch-all career in rom-coms, from Never Been Kissed to Sex and the City to so many more.

5. The Unrealistic Demands From The Boss

6. Falling In Love With The Guy You Hate

Harper unwittingly explains this trope early on. While talking about setting their bosses up, she says that if they hate each other, that's OK. Hate isn't the opposite of love. It sorta explains how she and Charlie start out as enemies but fall in love by the end. It's straight out of the Meg Ryan classic, You've Got Mail. See also: The Proposal and 10 Things I Hate About You.

7. Elevators As Keys To Love

Charlie and Harper try to set up their bosses by arranging a "meet cute" in an elevator. Not only is a "meet cute" a rom-com classic, but elevators feature prominently in many a romantic scene. 500 Days Of Summer, for example.

Of course, the Set It Up elevator scene doesn't go exactly according to plan. (P.S. Charlie and Harper's own meet cute? It comes when they meet in the lobby both trying to buy the same food from a delivery man.)

8. The Protagonists Give Each Other Dating Advice

Don't help her get another guy, Charlie! She's supposed to be with you! This trope can be seen in movies like When Harry Met Sally, aka the "we're just friends" trope, aka the "actually, wait, men and women can't just be friends" trope.

Andy from The Devil Wears Prada and Charlie from Set It Up deserve better. Also, how are the kids gonna learn??

10. Blowing Off A Date To Help Your (So Far) Platonic Friend

True love is ditching your date to help your opposite sex BFF with something mundane like doing another person's science project.

Becca and Mike from Set It Up can join Marie and Jess from When Harry Met Sally and Lillian and Dougie from Bridesmaids as perfect examples of what the lead characters are missing in life.

Charlie and Harper are jamming out when a slow song comes on. What are platonic friends to do? Slow dance and fall in love, of course! The "party song to slow song" trope can also be seen in films like Love Actually.

Climbing one while drunk and holding pizza is honestly just stupid, but you can't blame Charlie and Harper — they're only following in the footsteps of films like How To Lose A Guy In 10 Days and Breakfast At Tiffany's, which make frequent use of the emergency exits.

14. The Moment Where They Should Kiss But Don't

Suddenly someone always "should probably get going." The audience knows they're in love, and the characters do too, but they're not ready to act on it. (After all, there's still 30 minutes of plot left.)

There's always a mad dash to stop someone from getting on a plane, as seen in Valentine's Day and Love Actually. Gotta love the real life twist on it, though, when Charlie starts to rush and then realizes he has, like, four hours to kill. Also, this is an even more fun trope when you remember that Set It Up star Taye Diggs had an airport run of his own in How Stella Got Her Groove Back.

16. The Employee Who Doesn't Actually Want To Be Like Their Boss

Charlie pulls an Andy from The Devil Wears Prada and ditches his awful boss, because he realizes he actually doesn't want to end up like him.

17. Their Quirky Flaws Are What They Love About Each Other

Hopefully this goes for real life too, but movies like to have characters tell each other what they hate as a clever way of really saying I love you. The most obvious example of this is 10 Things I Hate About You. See also: When Harry Met Sally.

All's well that ends well... until the sequel!

More like this
Revisit 1992’s 'A League Of Their Own Cast' Photos After The New TV Series
By Grace Wehniainen
Taylor Swift Wanted To Be In 'Twilight: New Moon,' According To Its Director
By Grace Wehniainen
Jonah Hill Explains How His Anxiety Attacks Will Change The Rest Of His Career
By Grace Wehniainen
Here’s Where Manti Te’o Is Now
By Arya Roshanian
Get Even More From Bustle — Sign Up For The Newsletter