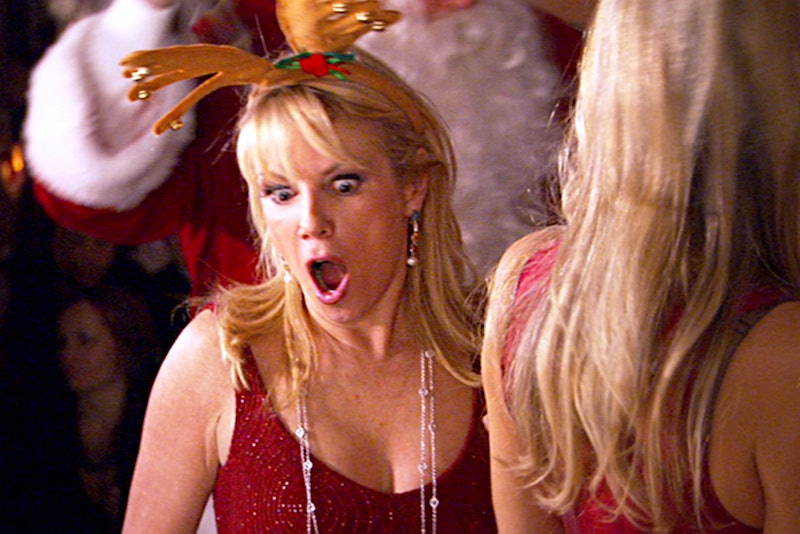 It's beginning to look a lot like Christmas... because of the beautiful Christmas decorations at the Real Housewives' homes across the country. Ladies from every Housewives show went all out with the holiday spirit this season. Some of the Housewives are giving off those "they're really just like us" vibes with their average-sized trees and decorations that are far from luxurious. They're even putting up the decorations themselves — or at the very least they're taking photographs of themselves putting on an ornament or two.

But then there's the other extreme. There are some women who have giant trees that could only fit inside of a mansion or over-the-top pink Christmas. There's no proof that some of the Housewives hired help to put up their more extravagant decorations, but considering the immense staff of party planners, housekeepers, and interns that a lot of the women have, it wouldn't be surprising if some of them acquired some outside assistance to get festive this year.

No matter which approach each family took to celebrating the holidays this season, the Real Housewives' decor is something to be seen. Check out the Real Housewives Christmas trees, place settings, lights, festive pajamas, and more to get in a festive mood.

At this point, Dorinda Medley can be considered the Queen of Christmas within in the Real Housewives franchise. She always "cooks, decorates, and makes it nice" when she hosts the Real Housewives of New York City ladies at her Berkshires house every season and she also sells her own ornaments. Last season, she even had a live Santa Claus on hand to add a little extra spirit to the situation. It's not surprising that she went with some over-sized decorations this year.

This is Kenya Moore's first Christmas with her new husband, Marc Daly. So yes, this photo of her tree is beautiful and all, but the real intrigue here is that she's actually sharing a photo of her man after keeping the romance under wraps for so long.

Kyle Richards, her husband, Mauricio Umanasky, and their youngest daughter, Portia, turned tree trimming into a family affair. As expected, the tree looks classically beautiful and is just as perfect as this family seems to be whenever they appear on Real Housewives of Beverly Hills.

Everyone who watches Real Housewives of Orange County knows that Vicki Gunvalson is all about family time, so of course she had Christmas decorations up by Thanksgiving.

Kameron Westcott made her love of all things pink clear during her first season as a Real Housewives of Dallas cast member. She was always wearing pink or talking about the color pink, so it makes sense for Kameron to have pink decorations and pink wrapping paper, but she also has a pink Christmas tree and it is everything.

Danielle Staub took the traditional route with her red bows, poinsettias, and wreath, and it proves that tradition is tradition for a reason. Her home looks beautiful!

Truthfully, it's kind of shocking that Bethenny Frankel doesn't have a tree that's Skinnygirl red, but the white tree and stockings are definitely working here. She also has an Elf on the Shelf chilling on the mantle to entertain her daughter, Bryn Hoppy.

Porsha Williams' Christmas tree is elaborate and perfect with white and gold decorations. Porsha even matched her gift wrap to the tree.

Lisa Vanderpump is another Housewife who has always been forthcoming about her love for the color pink. Her tree is just perfection with its abundance of pink ornaments. She's also rocking a Christmas sweatshirt with a holiday photo of her dog Giggy. LVP is really going all out with the holiday spirit this year.

Since Orange County is known for its sunshine, it makes sense for Shannon Beador to put a spin on Christmas decorating with some beach-themed ornaments.

Cary Deuber didn't just deck out her tree for the holidays, she even rocked a Christmas-inspired shirt to take the festivities up a notch.

Ramona Singer didn't just buy a Christmas wreath. She actually decorated one herself. There also seems to be a little hint of "Ramona blue" in there.

Cynthia Bailey and her daughter, Noelle, are very excited that it's the most wonderful time of the year at Lake Bailey.

Kim Richards kept it simple with her tree and just focused on spending time with her daughter and grandson.

Real Housewives of New Jersey alum Jacqueline Laurita gave her fans a look at all of her ornaments, complete with holiday music playing in he background to really set the mood.

RHOC alum Heather Dubrow needed a ladder to decorate the top of her tree at Château Dubrow. The woman known as "Fancy Pants" has a tree that's actually not-too-fancy with homemade ornaments and photos of her family, and it's great.

Kelly Bensimon was all smiles trimming her tree with her pet dog in hand.

Adrienne Maloof and her sons decided on a "Grinchmas" theme this year complete with green ribbons on the tree and stockings with images of the Grinch on them.

The Real Housewives stars came through with their holiday decorations this year, and now it's just time to focus on family events, food, and gifts — which will probably be documented on social media, as well.