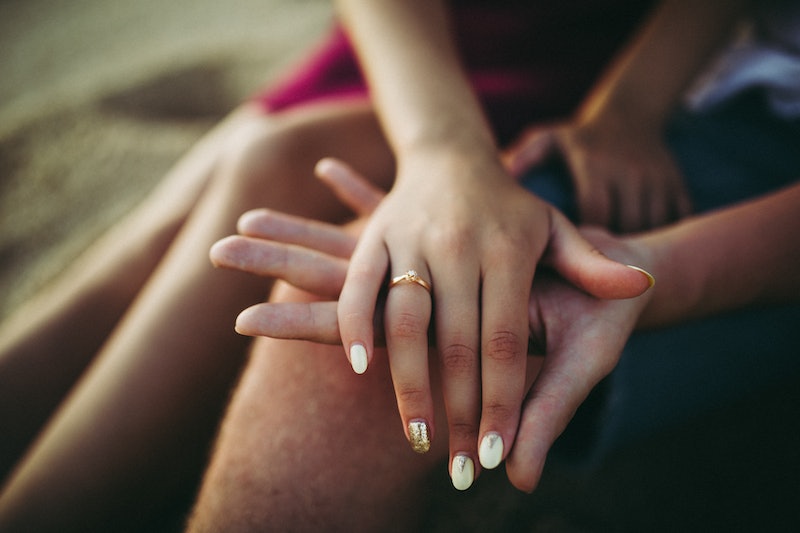 How long did it take you to find your one, true love? If you're anything like me, you had to date a string of losers before you got it right. If you're one of these women who married their first love, though, you may have figured some things out a little faster than the rest of us. True, not all of the relationships lasted forever. We're still human. We grow apart, have fights, stop feeling the happiness we once felt. But whether or not it ends with a "happily ever after," one thing is for certain about first loves: they change you like no other relationship can.

Statistics on marriage to first loves are not exactly abundant. One 2014 survey from YouGov UK said that of the roughly 46 percent of British adults who are married, 27 percent have married their first love; and while these marriages are rather uncommon, they seem to work: their data says that when it comes to three factors — "definitely still in love," "have never thought about leaving partner," and "will be with partner until dying day" — people married to their first love (as opposed to their second, third, etc.) come out on top across all three, with 64 percent, 78 percent, and 97 percent agreeing with these factors, respectively. For people who didn't marry their first love, the numbers are 56 percent, 63 percent, and 88 percent respectively.

IllicitEncounters, a British dating site for married people, ran a survey of their own and found that out of a random pool of 1,000 people, 25 percent are still with their first love.

Marrying your first love sounds like a Disney romance; but like any relationship, sometimes it lasts, and sometimes it doesn't. Here's how it went for these 19 women.