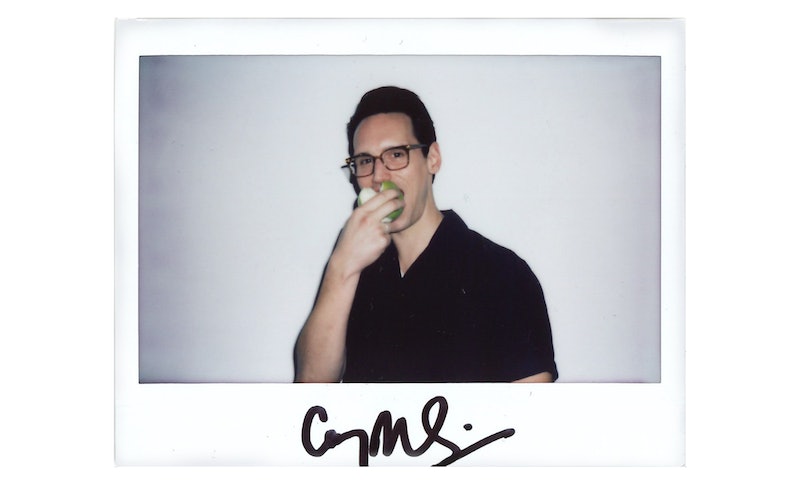 When celebrities hang out with Bustle editors, we want to give them the chance to leave their mark. Literally. So we hand them a pen, a piece of paper, a few questions, and ask them to get creative. The rest is up to them. This time, 1985 and Gotham star Cory Michael Smith is leaving his mark in the Bustle Booth.

The first time Cory Michael Smith read the script for filmmaker Yen Tan's indie family drama 1985 (out in limited release now), he tried to maintain some professional distance. Being a core cast member of a big network action series like Gotham meant a packed schedule for much of the year and little opportunity to do much else. But when the production moved and the film shoot sat "beautifully in [his] hiatus," the actor asked to read it again. This time, that objectivity was out the window. "It like, crushed me three different times while it was reading it," Smith says, wistfully. He Skyped with Tan for just over an hour, and the next day, the role — his first starring role in a film — was his.

Smith leads the quiet film as Adrian, who's traveled back to his midwestern hometown for the holidays after a long absence. It's profoundly evident that he doesn't feel able to be fully himself there, and that there's a tragic purpose behind the visit that he might not ever reveal to his parents (Michael Chiklis and Virginia Madsen) or his younger brother (Aidan Langford). 1985 is all about the meaning in the silences and the truth behind the pleasantries, which Smith could relate to.

"It’s by far the closest thing to my family dynamic than I’ve ever done," he says, explaining that he and his close relatives are "very non-verbal in our communication" and "indirect in the way that we handle things." It's surprising to hear him include himself in that assessment, since Smith is exceedingly friendly and open when he visits Bustle HQ. But who among us doesn't become a slightly different person when we're with our families?

The fact that the actor understood this kind of relationship made the work come somewhat easily. But since it sat so close to home, it had a complicated impact on him personally. His mom would be the first member of his family to see the film at its New York premiere a few days after we talked. Though he was eager for her feedback, Smith wasn't planning on sitting with her while she watched.

"I think the emotional life was more available to me because it felt like a world that I could really sit in very comfortably, because I know it and I didn’t have to build it," the actor says. "But I didn’t talk to my family much when I was doing it ... So, it was difficult in the terms of the cost of doing it emotionally."

Smith was born the year after the film is set, right in the middle of the worst of the AIDS crisis in the U.S. Playing a character not only afflicted by the disease but also afraid to share his diagnosis with the people who raised him has given the actor the opportunity to be in dialogue with many survivors. He recalls a screening of 1985 in San Francisco's Castro District wherein the staff had to actually request the filmmakers bring the conversations to an end so they could close up the theater. "People just wanted to talk," Smith says, adding that it's a film he loves to share because of how "cathartic and therapeutic" it is for certain audiences.

"We rarely see the people that were swept up in [the AIDS crisis] and the people that weren’t fighters," he explains, pointing out that films that address AIDS are often about treatment or activism. "And the people who didn’t have a loud voice and who weren’t on the front lines and maybe, you'd say, weren’t the brave ones. The quiet ones. We don’t really know what that experience was like for these people."

With that goal in mind, 1985 is fittingly quiet and cozy, a welcome change for Smith from the sprawling set of Gotham. Though, there's a little bit of that homebase in this movie too — Smith helped recruit Chiklis, Gotham's Captain Barnes, to play Adrian's stoic father. ("He’s really gregarious and he’s a family man ... If you take someone who has all of those instincts and tell him to put a really heavy blanket over all of them and resist all that, I just thought it would be really interesting," he says.) Jamie Chung, who played Valerie Vale on the Fox series, came on board to play Adrian's high school girlfriend Carly, a stand-up comedian.

Familiar costars aside, Smith was happy to scale down for this movie, much of which is shot in the family home. He says he feels lucky that his projects so far have had a budget behind them, but that operating without the big production apparatus helped the small-but-mighty 1985 team stay focused.

"It was just nice to chill in the house with Virginia and Michael and Aidan," he says. "We can all just chill in what was my bedroom, and the four of us tell stories and laugh and joke. And then go have Christmas morning on camera."

That low-key set-up is pretty much the polar opposite of Smith's other recent feature, First Man, in which he plays NASA astronaut Roger Chaffee, who died in 1967 when the Apollo caught fire during a test. The actor says he was one of the countless kids who dreamed of going to space camp, but it seems that the hours he spent in the film's version of the capsule probably dashed those. "Shea Whigham [Gus Grissom] had the first panic attack. I had the second one. And Jason Clarke [Ed White] I think handled it pretty well. He was holding my hand at one point," Smith sums up with a laugh. Being horizontal in a heavy suit and helmet for hours at a time aggravated his claustrophobic tendencies, but at least, as he says, "It was cool to watch."

With two movies of very different scale currently in theaters, Smith is looking to the future, which — unfortunately for fans of the DC adaptation — means the end of Gotham and his run as the Riddler. Though the series was originally only supposed to have 10 episodes in its next and final season, the network gave them two more at the last minute, taking the total episode count to a solid 100. ("We were all like, 'You’ve got to be f*cking kidding me,'" jokes Smith about the initial plan to end at a much less impressive-sounding 98.)

He doesn't know exactly what's to come yet, since the final two scripts were still being written when we spoke. But he can promise some closure for the rollercoaster relationship of Ed Nygma and Oswald Cobblepot, a.k.a. the Penguin (Robin Lord Taylor), which thus far has evolved from rivalry to friendship to unrequited love to blood vendetta, and maybe back to friendship again. Smith observes that it's an important dynamic not just to the show, but to the actors who have played those characters for five years. Co-star Ben McKenzie (Jim Gordon) is penning that episode, and he sought Smith and Taylor's input. "So we had a little conference call and got to say what we would like to happen and contribute," Smith explains.

It's a "bittersweet" moment for the actor, leaving Gotham — and the East Coast — behind. He says he's escaping to Los Angeles for the time being, because he's not going to miss New York City winters. His cast, on the other hand...

"I'm trepidatious about ever [again] having a community of people that worked so well together — especially that many, it’s a huge cast," he reasons. "But, I am excited about new opportunities and a new chapter. I’m totally buying into things ending and beginning."