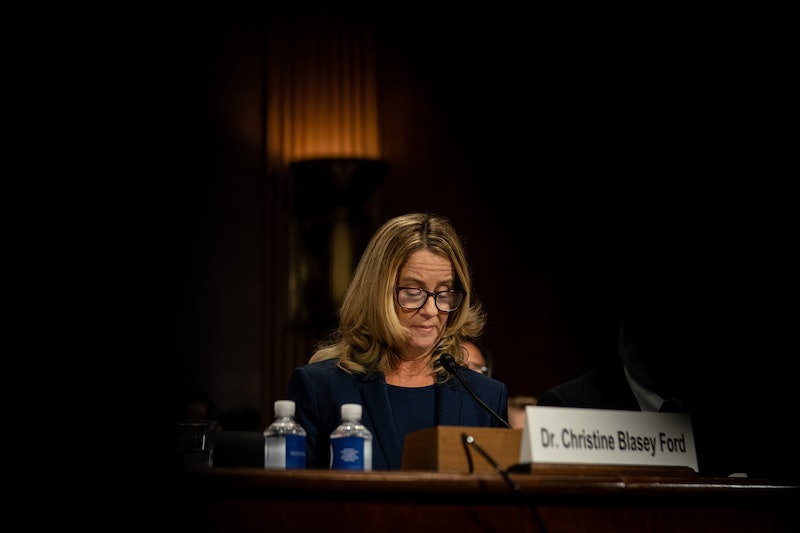 If the “uproarious laughter” of now-confirmed Supreme Court Justice Brett Kavanaugh is indelibly imprinted in Dr. Christine Blasey Ford’s mind, her reporting of that laughter — and the alleged assault that went with it — is now indelibly imprinted in the minds of American women. But while Blasey Ford’s experience of sexual assault might not be uncommon, her reporting of it is. Yes, even in the era of #metoo.

Two recent books look at this phenomenon — the underreporting of rape and other sex crimes, and the ways the U.S. justice system supports rape culture. And in the wake of the Access-Hollywood-tapes-to-Brett-Kavanaugh-confirmation (and every single thing in between) whirlwind American women are currently finding ourselves in, they should be required reading — for both anyone still awakening to the realities of rape culture in the United States and those who are already, long, woke.

But first, some data: according to a sexual violence study conducted by the CDC in 2012, nearly 1 in 5 women in the United States report experiencing rape at some point in their lives, and approximately 1 in 20 women report experience with sexual violence other than rape (unwanted sexual contact, non-contact unwanted sexual experiences, etc.) They key word here is report. As research shows, rape is the single most unreported crime in the United States — and the most under-prosecuted, even when reported. RAINN (the Rape, Abuse & Incest National Network, and the nation's largest anti-sexual violence organization) research shows only 310 out of every 1,000 sexual assaults are reported to police — aka: that means about 2 out of 3 go unreported. So, what gives?

Missoula: Rape and the Justice System in a College Town by Jon Krakauer, $16.95, Amazon or Indiebound

One book that looks at why rape is so frequently unreported — and how the justice system fuels this underreporting — is Jon Krakauer’s Missoula: Rape and the Justice System in a College Town, published in 2015. As a case study, Krakauer uses the town of Missoula, home of the University of Montana and once dubbed the “rape capital” of the country. (As of Krakauer's writing, Missoula was on par or slightly below national rape averages for a town it’s size.) Missoula, the journalist writes, is “an effort to understand what deters so many rape victims from going to the police, and to comprehend the repercussions of sexual assault from the perspective of those who have been victimized.” Krakauer looks closely at the experiences of several college-aged women in Missoula: their rapes or assaults, their decisions to report those attacks, and their subsequent re-victimization by healthcare providers, the local police department, and the criminal justice system.

Of the cases Krakauer looks at, one perpetrator is convicted, one is found not guilty, and law enforcement declines to even prosecute a third. But while the outcomes of each case might be different, the trauma experienced by the victim(s) is not. Krakauer frequently pulls from the research of Harvard Medical School professor Judith Lewis Herman, who has researched the mental health of crime victims. “The mental health needs of crime victims are often diametrically opposed to the requirements of legal proceedings,” she writes, explaining how the social, emotional, psychological, and sometimes physical demands placed upon victims often serve to re-traumatize. “Victims need an opportunity to tell their stories in their own way, in a setting of their choice; the court requires them the respond to a set of yes-or-no questions that break down any attempt to reconstruct a coherent and meaningful narrative,” Krakauer quotes Herman.

The second title is A False Report: A True Story of Rape in America by T. Christian Miller and Ken Armstrong, published earlier this year, which looks at the case of serial rapist Marc Patrick O’Leary. His first victim, an 18-year-old woman named Marie, reported her rape but was coerced by local police into confessing to false reporting and charged with a gross misdemeanor. Like over 90% of perpetrators of rape, (994 out of 1000, according to RAINN) O’Leary’s crimes weren’t initially investigated and he was free to reoffend, systemically raping other women before finally being arrested and convicted in 2011.

A False Report: A True Story of Rape in America by T. Christian Miller & Ken Armstrong, $14.67, Amazon or Indiebound

A False Report also looks at the history of rape and false reporting in the United States — a culture of misogyny and victim blaming dating all the way back to pre-Salem witch trial days. More than documenting the specific case of O’Leary and his victims, A False Report demonstrates that rape culture is, in many ways, threaded into the very foundation of American culture — and it’s a monumental task to untangle.

They’re difficult books to read, especially when practically every day there’s a new headline rubbing women’s rage raw. “The universe of women who had been raped looked identical to the universe of women,” Miller and Armstrong write in A False Report. “They could be mothers, teens, sex workers. They could live in mansions or in flophouses. The could be homeless or suffer from schizophrenia. They could be black or white or Asian. The could be passed out or drunk or completely sober. And they could react to the crime in all kinds of ways. They could be hysterical. Or withdrawn. They could tell a friend, or they could tell no one. They might call the cops right away, of they might wait a week, a month, even years.”

Or, far more commonly, they might not call the cops at all.

Both Missoula and A False Report are filled with examples of a criminal justice system that, when faced with a rape case, interrogates the victim just as, if not more harshly than the alleged perpetrator. Both books demonstrate how women who report their rapes are often, in effect, put on trial themselves first — rape being the only crime wherein the burden of proof is placed largely on the victim, and where the standard for reasonable doubt is impossibly high. The vulnerabilities of victims are exploited, their personal histories subject to interrogation, their character questioned, and their lives upended — first by the crime committed against them, and then by a justice system that wasn’t designed with their justice in mind. If, after Trump’s election and Kavanaugh’s confirmation, there is anyone left in American wondering why rape victims nearly always choose not to report the crimes committed against them, these two books leave practically no doubt.