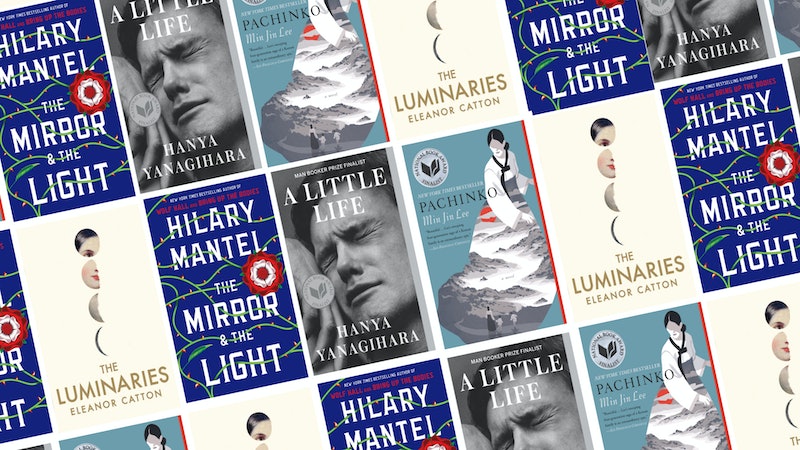 Stuck at home with a lot of free time on your hands? There's no better time to get lost in a good story, and Bustle has compiled a list of 20 long books that might take you all of your quarantine to read. Ranging from 502 to a whopping 1184 pages, these are hefty reads for hefty times.

Reading books won't ease all your pandemic related anxieties, but what it can do is give you the opportunity to leave your problems behind for the handful of hours it takes you to read a damn good story. We don't know when this crisis will end, but we do know that good art can bring us some comfort in dark times.

Want to learn something while you're quarantined? There are books on this list for that. Feel like checking a classic book off your bucket list? We've got you covered. Need to escape into a world of total fantasy? You're in good company here.

Check out these 20 long books that might take you all of your quarantine to read:

The Mirror & the Light by Hilary Mantel

Hilary Mantel wrapped up her Thomas Cromwell trilogy with this March release, which follows Cromwell over the final few years of his life. If you've been following Mantel's trilogy since Wolf Hall, The Mirror & the Light is probably already at the top of your quarantine reading list, but now's an excellent time to get into reading these doorstopper novels.

A Little Life by Hanya Yanagihara

Hanya Yanagihara's multi-award-nominated novel follows four college friends as they move from Massachusetts to start their lives in New York. They're all working through their past traumas in order to launch their bright, new futures, but for one of them, the shy and sensitive Jude, the past may prove to be too much to bear.

Nominated for the Booker Prize in 2019, Lucy Ellmann's Ducks, Newburyport tops 1,000 pages with a single sentence. Yes, you read that correctly. The book centers on a piemaker living in Ohio, whose thoughts compose its narrative as they arise. It's unlike anything you've ever read before, and you owe it to yourself to read it during your quarantine downtime.

When a passionate affair with a married man leaves the teenage Sunja pregnant, her mother arranges a hasty marriage to Isak, a Korean missionary headed to Japan. There, they raise two sons — the firstborn, Noa, and Isak's biological child, Mosazu — in a country that treats them like second-class citizens, due to their Korean ethnicity. It's a life of hardship, and one that becomes incredibly complicated when Noa's biological father comes back into their lives.

Secondhand Time: The Last of the Soviets by Svetlana Alexievich, translated by Bela Shayevich

From the Nobel Prize-winning author of Voices From Chernobyl comes this oral history of the Soviet Union's downfall. Svetlana Alexievich's Secondhand Time weaves together multiple generations of voices from across Russia to examine the decline of the Soviet era, the transition to capitalism, and what came after in the new Russia.

A Discovery of Witches by Deborah Harkness

It's been more than a year since the first season of Bad Wolf's A Discovery of Witches wrapped, leaving fans anxiously awaiting the next chapter of the story. Now's an excellent time to read the Deborah Harkness novel that started it all. The book centers on Diana, a magic-hating librarian born into a family of witches, who accidentally uncovers an ancient manuscript with the power to start a supernatural war.

Almanac of the Dead by Leslie Marmon Silko

Laguna Pueblo author Leslie Marmon Silko's Almanac of the Dead weaves together dozens of voices from across the southwestern United States, Central America, and South America. It moves away from some characters and stories only to return to them hundreds of pages later when you least expect it. Silko's novel is an experience you won't want to miss out on.

The Prison Letters of Nelson Mandela, edited by Sahm Venter

Between 1962 and 1990, Nelson Mandela spent more than 10,000 days in prison for his opposition to South African apartheid. He would later become his nation's first post-apartheid president in 1994. The Prison Letters of Nelson Mandela includes 255 pieces of writing from the late political leader — who passed away in 2013 at the age of 95 — to his family, friends, and oppressors.

Adapted into a miniseries in 2015, Susanna Clarke's Jonathan Strange & Mr Norrell is exactly the kind of escapist fantasy you need right now. The story here centers on the eponymous librarian, Mr. Norrell, who works as a caretaker of England's lost-since-passed magical history. But when Norrell's studies allow him to recover a magic that has been lost for centuries, he suddenly finds himself waging war against Napoleon Bonaparte and taking on Jonathan Strange as a willing pupil.

The Tale of Genji by Shikibu Murasaki, translated by Arthur Waley

Widely considered to be the first novel ever written, Lady Murasaki's 1008 book, The Tale of Genji, follows hundreds of characters from fictional Japanese noble houses through decades in the life of one character, Hikaru Genji, and his descendants. It's an expansive novel that traces the lives of its cast with intimate detail.

In a small New Zealand town gripped by gold fever, a young newcomer finds himself embroiled in an intrigue plot with three key players: a disappeared man of means, a sex worker who has attempted suicide, and an alcoholic in sudden possession of a massive fortune. He joins a group of 12 other men desperate to find out what has happened, and what it all means for them and their yet-to-be-made fortunes.

These Truths: A History of the United States by Jill Lepore

If you find yourself with a lot of time on your hands during this quarantine season, consider picking up Jill Lepore's These Truths, a sweeping history of the U.S. from 1492 to the present. Far more than a dry history tome, this book paints vivid portraits of the figures and decisions that have shaped the country, from European discovery until now.

The Priory of the Orange Tree by Samantha Shannon

Another massive book that's perfect for anyone who wants to escape reality for a little while, Samantha Shannon's The Priory of the Orange Tree focuses on three women tasked with preventing the apocalypse. Centuries ago, House Berethnet sealed away the dragon known as the Nameless One. Now, the time has come for the house's current queen to produce an heir, but the Nameless One may be poised to make an untimely return. It's up to Queen Sabran and two unlikely allies — a spying mage named Ead and a dragon rider named Tané — to prevent their common enemy from escaping the Abyss and destroying the world.

Set in a small country town in England on the cusp of the Victorian era, George Eliot's Middlemarch weaves its way through the stories of the villagers with gusto. Of particular importance is the tale of Dorothea Brooke, an orphaned teen who marries the local minister, only to find herself falling in love with his cousin.

At age 13, Theo survives the museum explosion that kills his mother — an event that sets the trajectory of his life. At the time of the incident, he was enraptured by the paintings of a Dutch master who died under eerily similar circumstances. As an adult, Theo becomes entangled in an underworld of forgery and theft, forever chasing something he lost on that dreadful day.

The Golden Notebook by Doris Lessing

After recording the major events of her life in four notebooks, one woman attempts to write the overarching narrative of her own story in the titular golden notebook in this 1962 novel from Noble Prize winner Doris Lessing. If you've ever found yourself thinking about the intricate webbing that connects various facets of our lives, you're going to love The Golden Notebook.

The Recovering: Intoxication and Its Aftermath by Leslie Jamison

The isolation of quarantine can be difficult for anyone dealing with a substance abuse issue. Leslie Jamison's The Recovering combines investigations into how we think about recovery with details from the author's own path through Alcoholics Anonymous. It's a poignant and eye-opening look at sobriety, and one worth reading today.

Set in the late 17th century, in the French-colonized portion of North America known as "New France," Annie Proulx's Barkskins centers on two lumberjacks, René and Charles, as they sign over three years of their lives to a feudal lord in the hopes of one day owning their own property. Proulx's family saga follows the descendants of these two men over the course of several generations, tracing their impact on the people and places they encounter along the way.

Originally published in separate volumes, Sigrid Undset's family epic is now collected in a single tome as Kristin Lavransdatter. When a teenager in medieval Norway bucks her parents' expectations to marry for love, she sets off a chain of events that will impact their family for generations. It's a must-read story, and one you finally have the chance to finish during the quarantine.