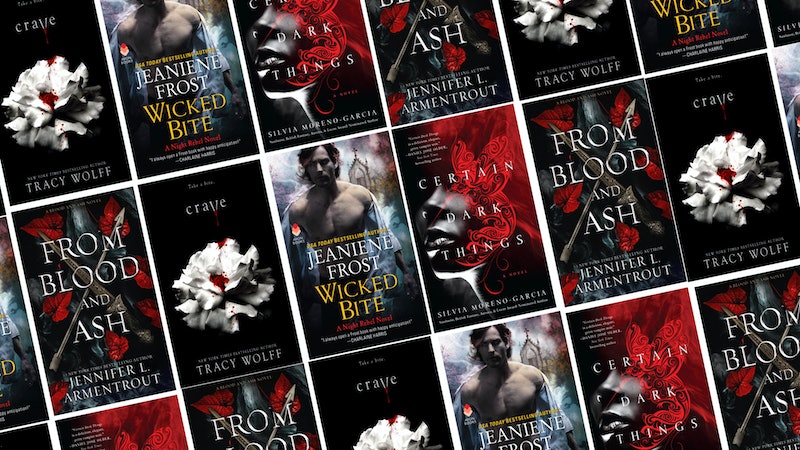 Stephenie Meyer fans got some long-awaited good news this spring, when the author announced the release of Midnight Sun, a Twilight retelling from Edward Cullen's perspective that's been more than a decade in the making. The new Twilight book is out on Aug. 4, but for those of you who just can't wait to get back into the brooding, blood-sucking world of Twilight, Bustle has put together a list of 20 great vampire novels to read before Midnight Sun comes out.

Young adult publishing is in the middle of a vampire renaissance. Years after Twilight kicked off a paranormal-teen-romance publishing boom, readers are ready to dive back into the decadence and horror of vampire-human relationships. Several new vampire sagas — such as Renée Ahdieh's The Beautiful quartet, Jennifer L. Armentrout's Blood and Ash series, and Tracy Wolff's Crave trilogy — are already on shelves, with more to come before Midnight Sun lands in bookstores this year.

Whether you've kept up with all the vampire-themed book releases that have come since Meyer closed out her Twilight Saga in 2008, or your love of vampires has just been re-awakened by the Midnight Sun announcement, you'll find something to enjoy on the list below.

Here are 20 great vampire novels to read before Midnight Sun comes out:

The first book in Tracy Wolff's vampire trilogy, Crave centers on Grace, the only human student at a boarding school for supernatural creatures. Given a chilly welcome by her classmates, Grace finds herself drawn to Jaxon — a brooding vampire prince — but their relationship doesn't exactly endear her to the rest of the student body. Throw in some deadly intrigue to mingle with the dark secret Jaxon bears, and you've got a recipe for YA vampire success in Crave.

Set in an alternative version of Mexico City, one in which the cartels are run by powerful vampires, Silvia Moreno-Garcia's Certain Dark Things centers on Atl, a vampire of Aztec descent, and Domingo, an orphan who knows Mexico City's streets all too well. She's on the run, headed for South America, and he's just trying to survive. When they meet, Atl sees Domingo as an easy target, and nothing more. But as she continues her flight, and danger begins to close in, she finds herself drawing ever closer to the boy.

From Blood and Ash by Jennifer L. Armentrout

Poppy's is a lonely existence. As the Maiden, she must live removed from society, protected from the outside world. No one speaks to her, touches her, or even looks at her. She's the last of her family, and their loyal servants have sworn to keep her safe. Those servants include Hawke, the attractive guard who captures Poppy's attention, even as he is duty-bound to protect the Maiden.

She looks like a pre-teen girl, a child in distress. She's been gravely wounded, abandoned in a cave, and left to die. She doesn't know who she is or where she came from. A man "rescues" her, not realizing the truth. Shori isn't a child — she isn't even human! — and she doesn't need protecting.

The second novel in Kiersten White's Buffy the Vampire Slayer sequel duology, Chosen finds Nina dealing with her sister's absence and trying to maintain a utopia for ostracized demons in the Watcher's Castle. There's no time to rest, however, because someone's coming for the last Slayer, and they might be inside her home already.

Spoken-word artist by day, vampire-slayer by night, Damali leads an interesting life. When other artists on her label and at another, rival studio begin to turn up dead, Damali soon realizes that she and her Guardians are about to face their biggest thread ever — a vampire passionate and powerful enough to leave bodies in shreds.

Elena hunts vampires, and she's very good at what she does. But taking a new job from Raphael, a lethally powerful archangel, will plunge Elena deep into unknown territory. This time, her quarry isn't a vampire, but a rogue archangel, and Raphael is watching her every move. She knows failure is not an option, but as she grows closer to Raphael, she wonders if romance — or just a little fun — is off the table, too.

The second book in Jeaniene Frost's Night Rebel series, Wicked Bite finds Ian and Veritas together again after disaster nearly parted them for good. Ian remembers Veritas as the woman he married, and he's determined to make their relationship public knowledge. Realizing that he doesn't intend to take "no" for an answer, she leads him on a dangerous romp through a paranormal underworld, one in which her own life has a high price.

Better Off Red by Rebekah Weatherspoon

Ginger's the perfect student, and that makes her the perfect pledge, despite her own distaste for sororities. She doesn't intend to sign on with any house, but Alpha Beta Omega proves too much to resist. The sisters there are gorgeous and sexually unbridled, and that's just what Ginger needs. As she falls hard for Alpha Beta Omega's leader, however, Ginger learns that the sorority and her new sisters are anything but ordinary.

What if America was founded by vampires? That's the question at the heart of Melissa de la Cruz's Blue Bloods, set in a world in which the Mayflower brought blood-suckers to the New World. For centuries, they've been the most powerful families in the country, passing down power through generations. Now, a group of New York City teens is about to find out exactly what the legacy they've inherited entails...

The Taker by Alma Katsu

The first book in Alma Katsu's Taker trilogy, The Taker centers on E.R. doctor Luke and his newest patient, a murder suspect named Lanore — two people brought together by extraordinary circumstance. Decades earlier, Lanore had fallen in — unrequited — love with a man connected to Luke's hospital. Desperate to be with him, she finds someone who can make all her wishes come true, for a price.

Set in the same universe as Deborah Harkness' A Discovery of Witches, Time's Convert delves deep into the lives of Matthew and Marcus, two young men brought together in the midst of the American Revolution. Marcus holds the secret to eternal life, and he's willing to share it with his new compatriot. But life as a vampire may not suit Matthew entirely — something he learns altogether too late.

My Soul to Keep by Tananarive Due

Jessica believes she's found her happily ever after in David. He's handsome, wickedly intelligent, and devoted to both her and their daughter, Kira. But David's about to be called away from their Miami home, all the way back to Ethiopia, where he once took part in an illicit ritual to attain immortality. Now, the immortals are reconvening in their homeland, and David must choose between his old family and his current one. Must choose... unless he can bring Jessica and Kira into the fold.

Poppy Z. Brite's debut novel follows a teenage boy named Nothing as he searches for connection in the lonely clubs of the American South. Fifteen years ago, Zillah impregnated Nothing's mother, who was a teenager herself at the time. Now, the boy has reunited with his father, the leader of a group of wandering, lustful vampires, and together they set out in search of a place for Nothing to belong.

The Gilda Stories by Jewelle Gomez

This Lambda Literary Award-winning novel follows Gilda, a formerly enslaved woman who finds a new, eternal life when she meets the vampiric owner of a Louisiana brothel. The Gilda Stories follows its eponymous heroine over the next 200 years of her life, ending in 2050, in a devastated world on the brink of major change.

Smoke and Shadows by Tanya Huff

Another novel on Lambda's list, Tanya Huff's Smoke and Shadows centers on Tony, a man recovering from substance abuse and ready to begin a new life in Vancouver with his vampire companion, Henry. Working on the set of a TV show about vampires, Tony soon finds himself at the center of a dangerous and deadly plot. Is the set of Darkest Night haunted, or is something far more sinister at work?

The first YA novel from the author of The Mercies, Kiran Millwood Hargrave's The Deathless Girls follows a pair of 17-year-old twins whose world is turned upside-down by a series of tragedies. Lil and Kizzy's family is murdered, their home burned to the ground, and they find themselves enslaved in the home of a cruel warlord named Boyar Valcar. A fresh look at the Brides of Dracula, The Deathless Girls is a must-read story of love and resistance in the face of abject evil.

Silver in the Wood author Emily Tesh returns to bookstores this summer with Drowned Country, the sequel to her 2019 novella about the Wild Man of Greenhollow. When Henry is called home by his mother, he and Tobias journey to the ancestral Silver house, where a vampire-infused mystery is afoot.

From the author of the Vampire Hunters Academy series comes this tale of the vampire who started it all. Cain is an outcast, cursed to wander the Earth for all eternity. His children are the enemies of those who would slay them. But Cain has his own burden to carry, and his own scores to settle, in this new novel from Delizhia Jenkins.

The Damned by Renée Ahdieh (July 7)

Renée Ahdieh's The Beautiful gets a sequel this year in The Damned. Celine and Bastien's love affair has come at a great cost. A newly minted vampire, Bastien has to deal with a fresh chip on his shoulder, while Celine tries to recover her lost memories, which she doesn't realize she once gave up freely in order to be with her love forever.

More like this
Netflix Shut Down 'Bridgerton' S3 Rumours About A “Very Dark” Storyline
By Bustle
'The Last Of Us' Episode 4 Put Twitter Into An Emotional Spiral
By Alyssa Lapid
Bill & Frank’s 'The Last Of Us' Episode Has Twitter Emotionally Wrecked
By Alyssa Lapid
10 Equally Romantic & Heartbreaking Books From British & Irish Authors
By Shahed Ezaydi
Get Even More From Bustle — Sign Up For The Newsletter
From hair trends to relationship advice, our daily newsletter has everything you need to sound like a person who’s on TikTok, even if you aren’t.