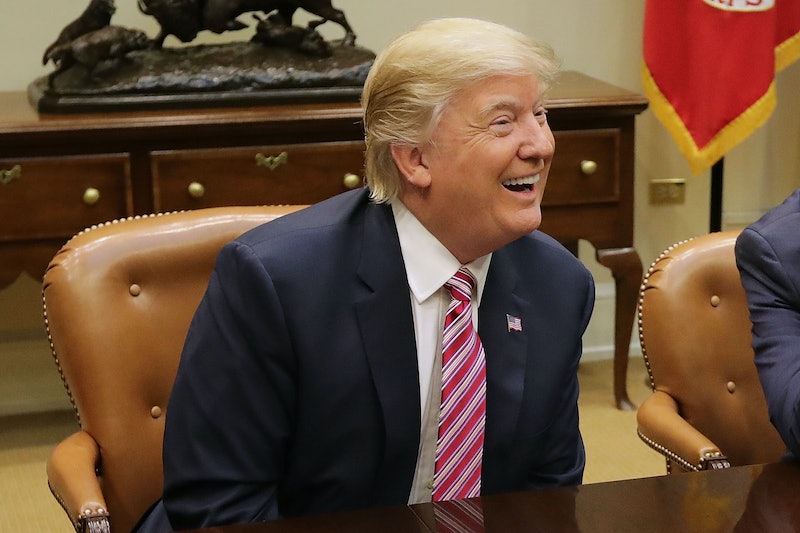 Springing forward is never easy, but some people seem to be a little more bitter about this weekend's time change than others. On Sunday, as Americans across the country awoke with one less hour of sleep than usual, funny (and brutally honest) daylight saving time tweets about President Trump began circulating online. The two trending topics may not seem to have much in common, but as with most headlines in the U.S. nowadays, all roads usually lead back to Trump.

If you want the president to abolish the dreaded clock movement, you're not alone. It seems Trump could win more than a few friends that way. If you haven't slept well since January's inauguration and one hour less of sleep on a weekend doesn't feel any different to you, then you're also not alone. Overall, people seem to have very mixed opinions about daylight saving time — almost as mixed as the country feels about the controversial commander in chief.

The controversy around daylight saving time is nothing new, and neither are the calls to end it. But with Trump in office and the recent behavior of his administration, there's certainly a whole new spin to put on the ever-painful time adjustment.

If by "all" you mean "literally the only thing he does," then yes.

What's in a name?

Take a break from the healthcare debate.

Win at daylight saving time for all of us.

It's a darker morning, but a brighter future.

Plot twist: Don't ever set the clocks back.

Maybe the GOP will petition to have the next election the morning after daylight saving time.

In reality, the president was relatively quiet on Twitter on Sunday morning.

Let me know if you find it!

Even the most prolific of tweeters need their sleep.

"Falling back" has taken on a whole new meaning.

We found love in a hopeless morning.

Now that's an executive order that voters can get behind.

It's the new version of #ThanksObama.

If only a cat picture could really do the trick. Trump may have nothing to do with daylight saving time, but Sunday's tweets show that plenty of people don't need a legitimate reason to be upset with him. The country is undeniably divided — and, for one reason or another, undeniably tired.