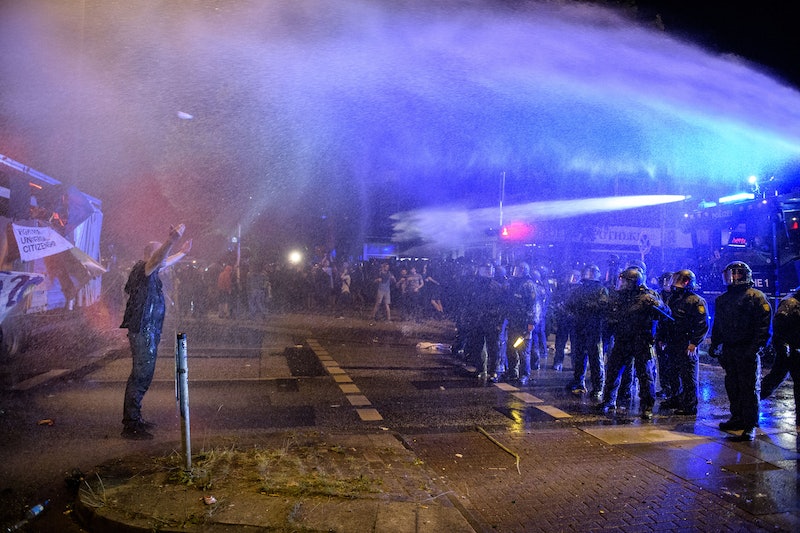 As President Trump and team arrived in Hamburg, Germany, on Thursday ahead of the upcoming G20 summit, violent outbursts arose within the city's streets. Protesters reportedly confronted law enforcement officers, threw rocks, and even set fires to express their dissatisfaction with the American president and the summit he was preparing to attend. Vivid photos of the Hamburg protests showed the violent clashes with police that rang in this week's meeting among world economic powerhouses.

According to NBC News, protests often occur outside the G20 events. Billed as "a meeting at the highest level," the G20 summit brings together the world's most powerful economies, including those of the United States, the United Kingdom, Germany, Russia, and others. The agenda for this year's meeting includes such topics as sustainable development, refugee migration, and a wide range of economic issues.

The meeting will kick off on Friday and continue through Saturday at the Hamburg Messe und Congress, an exhibition center in the heart of the historic waterfront town. All eyes will likely be focused on Trump, German Chancellor Angela Merkel, Russian President Vladimir Putin, and the other world leaders in attendance. At the same time, German police forces may continue to draw attention if the protests that began on Thursday in Hamburg persist throughout the summit.

News of the protests made headlines around the world.

City streets appeared packed with protest-goers. Some carried or displayed signs that read, "G20 Mafia," and, "Welcome to Hell."

The protesters' message was bold and clear.

The protests carried a dark theme.

Police forces appeared to use armored vehicles to engage with protesters.

Although not armored like the police vehicles, protesters brought vehicles of their own into the mix, sending just as a clear of a message.

While some stood in front of police vehicles, other protesters gathered to make signs.

The streets of Hamburg saw a much different vibe on Thursday than the more formal meetings between world leaders going on nearby.

Police appeared to line and block streets so protesters could not progress.

By the looks of it, members of the police force weren't the only ones to block roads.

Both police and protesters appeared to strike back at each other. Protesters reportedly threw items at police officers, while police officers used water cannons and pepper gas to disperse the crowds.

The use of water cannons did not seem to discourage all protesters.

Speaking of not discouraging protesters...

In addition to the injured officers, the Hamburg protests appeared to leave the city a mess. It's not clear how much total damage was done.

It's not clear if the protests were actually permitted. According to DW, permit applications for a G20 protest camp were denied. Either way, the police likely had advance warning that a large-scale protest could occur.

Some images showed the stark contrast between the arrival of world leaders and the gathering of protesters in the streets.

The protests even appeared to alter the city of Hamburg's historic skyline on Thursday.

The Hamburg G20 summit is set to kick off on Friday with important discussions on global issues. Still, protesters appeared dissatisfied with the notion of a few countries leading the global economy for all. As an annual tradition, the G20 summit doesn't seem to have suffered too severely at the hands of protests outside its doors.