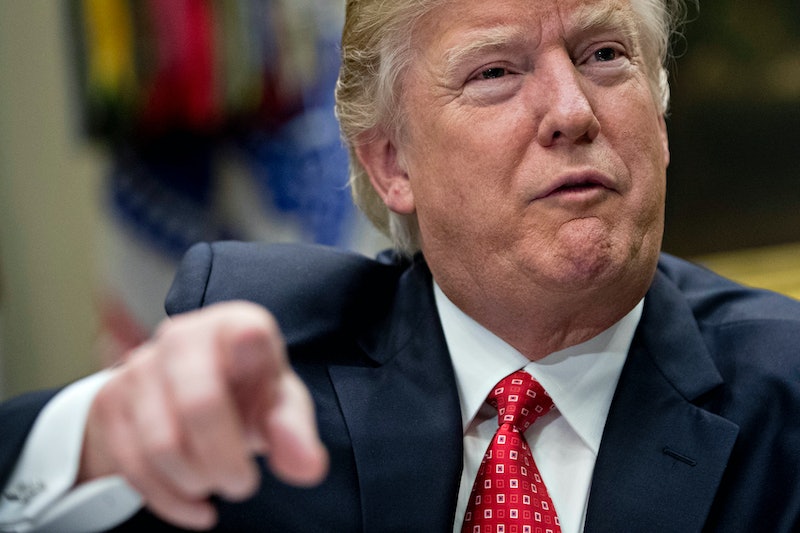 Thanks to an unspoken rule of the internet, you can always tell when someone has lost an argument with a stranger. As soon as someone starts typing in all caps, game over. Caps lock generally makes you look like a deranged lunatic pounding away on their keyboard for the sake of an online argument. Apparently, no one sent Donald Trump the memo. In response to the Ninth Circuit Court's ruling on Thursday, which upheld the restraint on Trump's controversial immigration ban, the president tweeted: "SEE YOU IN COURT." Appropriately, people have been tweeting all caps responses to Trump's reaction.

Because when you think about it, "SEE YOU IN COURT" is perhaps the perfect response when you want to shut down an argument (as the person you're arguing with will likely become too confused to continue). Unfortunately for Trump, it's the continuation of an argument... about taking a court to court, or something like that. And either way, it looks like there will be plenty of court for Trump in the future, as the decision could find its way to the Supreme Court eventually.

If Trump's first days on Twitter as president are any indicator, I'm sure we can expect plenty more caps lock by then. But until that time, we'll have to settle for fights with clothing stores, ominous threats to judges online, and of course, some tweets:

THIS IS A STATE OF EMERGENCY

For Trump, There Are Too Many To Go Around

Hey, Don't Blame This On The Caffeine

The Hour Is Even Better In Caps Lock

Somehow, Caps Lock Made This More Threatening Than Trump's Tweet

Some People Took Trump Literally... He Plays A Lot Of Tennis At Mar-a-Lago, After All

And There Was This Great Spin On The Caps Lock Itself

And This One, Well, Was Just A Cry For Help

A Friendly All Caps Reminder, Just In Case Trump Has Forgotten

Maybe This Was His Thought Process Behind It All

A New Hashtag Was Born Out Of This, Too

And Finally, Some Hope For The Future

And there you have it. Thanks to the president getting a little too eager with the caps lock button, a new meme has been born. Hopefully, it can provide a bit of solace in these otherwise dark, lower case times.