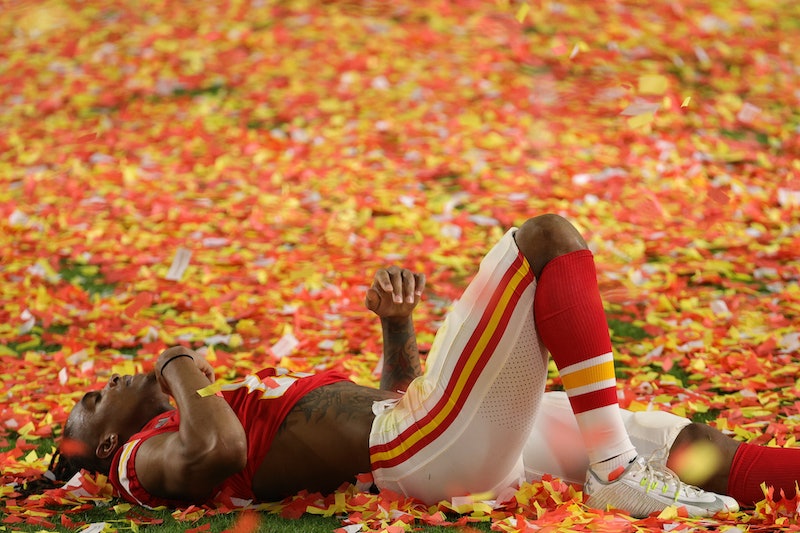 If you felt something that was just all of Kansas City celebrating the fact that the Kansas City Chiefs just won Super Bowl LIV. Cue confetti! Pop champagne! Baptize your friends, family, and fellow sports fans in Gatorade! When you’re done celebrating IRL, it’s time to take to the internet to post an Instagram caption celebrating Kansas City’s Super Bowl win. Why else does the football emoji exist if not to post joyfully on Instagram?

While no one loves a braggadocious winner, we can all appreciate or at least acknowledge a clever Instagram caption. I mean, the word “humblebrag” was coined because people literally cannot help themselves when it comes to talking about their accomplishments. The same is true of the sports teams we love.

Beyond hometown loyalty or loving players you grew up with, there is science behind loving sports, specifically sports wins. As the Columbia Journalism Review reported in 2014, cheering for a sports team you love ties into greater parts of being a person like our desire to be part of a larger community, our penchant for empathy, and the way sports, like art, can make us feel an array of emotions with little direct consequence to ourselves.

So, go ahead. Gloat a little. It's good for your brain. Here are 21 Super Bowl Instagram captions that Kansas City fans will love and everyone else will at least respect a little.

1. “Winning isn’t everything. It’s the only thing.”

There’s some question about who actually said this quote. Some attribute it to football legend Vince Lombardi. Others say it was UCLA Bruins football coach Henry Russell Sanders. There is zero question about how good winning feels.

Give in to the desire to make a pun using roman numerals. After that gaem, deserve it.

6. “Haven’t been this happy since I realized you could put french fries on top of a pulled pork sandwich.”

7. “If anyone needs me, I’ll be watching highlights from this game until forever.”

This is the Kansas City Chief’s second win after a 50-year hiatus from the Super Bowl.

10. “It's not whether you win or lose, it's how you play the game...but winning does feel pretty good though.”

12. “Gonna call in sick to work tomorrow. Came down with a case of winning.”

If this doesn't call for a Friday Night Lights quote, then I don't know what does.

15. “I think Shakira said it best, *STICKS TONGUE OUT AND HITS THE ZAGHROUTA*”

Kansas City did both, baby!

An homage to some wise words from Andy Reid

If you’re still at a loss, just write “OMG” 50 times (in honor of the last time the Chief’s won the Super Bowl). Bonus points if you change the “O” to a football emoji.