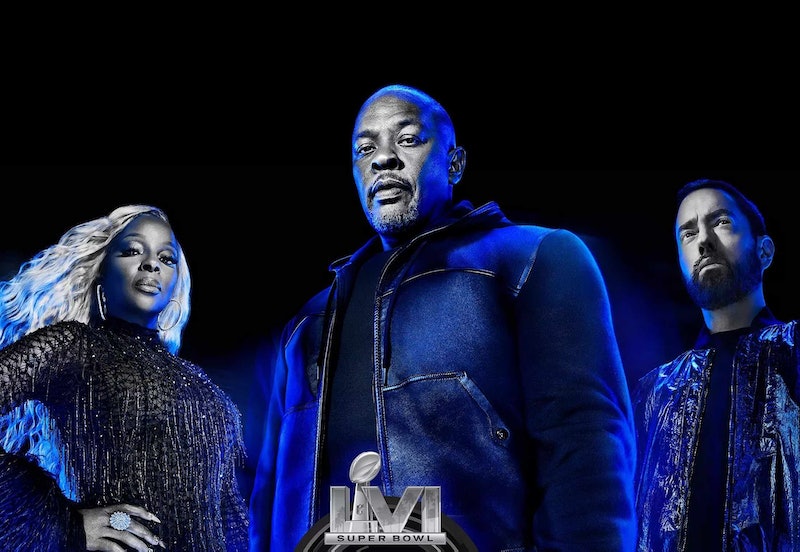 When Eminem rapped, “This looks like a job for me, so everybody, just follow me,” the NFL listened. The “Without Me” rapper joined Kendrick Lamar, Mary J. Blige, Snoop Dogg, and his mentor Dr. Dre to headline the 2022 Super Bowl Halftime Show on Feb. 13 at SoFi Stadium in Los Angeles, putting hip-hop and California’s rap icons in the forefront — a rarity for the Super Bowl.

Among the most-memed moments was 50 Cent’s surprise guest appearance. The 46-year-old rapper performed upside down, seemingly a nod to his 2003 music video for “In Da Club.” But viewers thought 50 Cent looked more like Spider-Man while he was hanging in the stadium. A day after his performance, 50 Cent reacted to all of the memes in several Instagram posts, writing, “👀who the fvck did this?” in one caption and “waiting for @snoopdogg and Dre like ok who’s idea was it for me to be upside down again?” in another caption.

READ NEXT: The 5 Most-Watched Super Bowl Halftime Shows Ever

Dr. Dre led the proceedings and made his grand entrance behind a DJ booth atop a stage of white buildings, including a digital rendering of Los Angeles, to introduce Snoop Dogg, who opened the musical performances with a PG-rated performance of his hit “The Next Episode.” The rappers then came together to perform “California Love,” paying tribute to fellow California rap icon Tupac (but without the famous hologram from their 2012 Coachella set).

Blige kept things moving with her Dre-produced hit “Family Affair” before delivering a rousing rendition of “No More Drama,” giving the song her all and ending her set on the floor — literally. Blige’s vocal prowess was a tough act to follow, but Lamar came through with an intense and slickly choreographed performance of his 2015 hit “Alright.”

Eminem was the last act to arrive, tearing the stage into pieces before making SoFi Stadium wave their hands to “Lose Yourself.” Finally, Dr. Dre took center stage once again for the finale, performing “Still D.R.E.” surrounded by his fellow performers before taking their collective bow.

Here’s how Twitter really feels about the halftime show, which you can watch here:

While he wasn’t one of the headliners, 50 Cent’s Spider-Man-style entrance was undoubtedly the most hilarious moment to Twitter, resulting in an onslaught of high-quality memes.

Eminem made the entire Super Bowl crowd (including Justin Bieber) sway to “Lose Yourself,” but it was the rapper’s decision to take a knee at the end of the halftime show in support of Colin Kaepernick that earned the respect of Twitter.