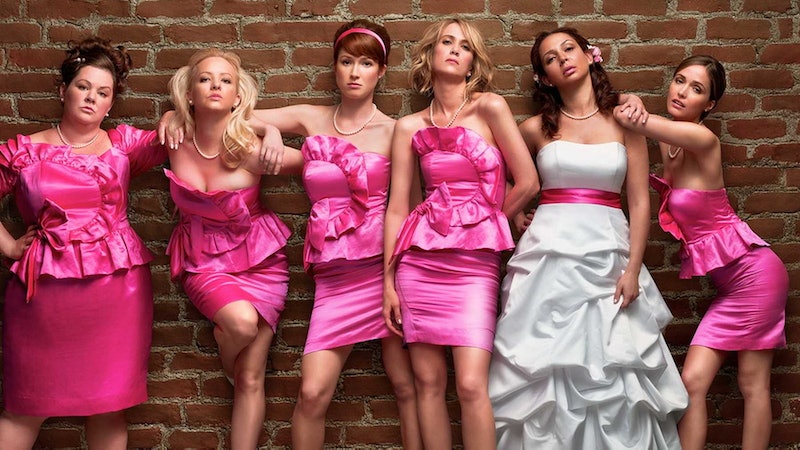 They say that laughter is the best medicine. Whether it's a belly laugh, a snort, a chuckle, or a giggle, it's a scientific fact that laughing decreases stress hormones and increases immune cells and infection-fighting antibodies.

So sometimes you just need to jump on your couch, munch on some peanut-butter-filled pretzels, and throw on a film that's going to crack you up and help relieve your stress. But regular chuckles aren't going to cut it in these strange times. No, we need something extra strength, movies that are guaranteed to keep you in stitches for an extended period of time.

Check out Bustle's list of 21 iconic comedies. From camp classics like Wet Hot American Summer to tried-and-true films such as Mean Girls. While comedy is the most subjective of elements, there's a laugh for everyone on this list, whether you're into goofy slapstick or a biting black comedy. Read on for the best movies to watch when you need a good laugh.

Watching a group of people in their 20s and 30s play a parody of camp counselors from a handful of ultraspecific 80s movie shouldn't be as wildly funny as it is, but it is. Paul Rudd's angsty teen scene is absolutely amazing, and if you don't agree, go write about it in your gurnal.

Available to stream on Showtime and Starz.

Who knew competitive dog breeding was so ripe a comedy field? Songs about terriers, clueless hosts, a May-December romance, overenthusiastic trainers and hypochondriac owners make for a blue-ribbon winner. (Note: You can substitute this for basically any other Christopher Guest film.)

Available to rent or buy on all streaming services.

Obviously something written by Tina Fey is going to make you feel better about life. Plus, don't you just love movies that you can quote while your friends tell you you're being obnoxious?

Available to stream on Roku.

In a Wes Anderson kind of mood? Herman (Bill Murray) and Max (Jason Schwartzman) compete for the attentions of a new 1st grade teacher at Max's school, and all's fair as the two go all-out to get her attention.

Infamously famous for being one of the world's worst movies, The Room better qualifies as pure outsider art. If you're looking for a really big laugh, see if any local theaters are showing a screening of the film because things can get pretty Rocky Horror Picture Show-esque. You won't be able to look away.

A California sorority sister attempting to get her Harvard law degree? Yes, please. (Plus, you can't pass on a chance to watch Reese Witherspoon at her pinkest prime.)

Available to stream on PlutoTV, Hoopla, and IMDB TV.

I think it's been officially proven that Jonah Hill and Channing Tatum are the most unlikely-yet-hysterical pair of cops ever. They just go together so well.

Available to stream on Fubo, Sling, and USA Network.

If you like a cappella music, Anna Kendrick, choreographed dances, or cheesy jokes then you need to watch this comedy about an all-girls college singing group. It's a-ca-awesome. (As a bonus: Watch the second movie afterwards.)

There's only one movie out there featuring an underwater bar fight, an entire scene done backwards in a "Swedish" bookstore, and a ludicrously young Val Kilmer singing and spying. This is it.

Available to rent on YouTube, GooglePlay, Microsoft, Redbox, and Vudu.

Talk about a stellar cast. All of the actresses in this film bring their A-game and knock the jokes right out of the park. Every scene is basically a new adventure into the wild world of being a woman.

Available to stream on HBO Go, HBO Now, and DirecTV.

This Mel Brooks film has a joke crammed into it every second, but the best part is that you have to keep your eyes and ears open if you want to catch all of them. There are little gems hidden everywhere.

Available to stream on Starz.

When I say this movie is perfectly stupid, I mean that as the highest of compliments. A businessman goes on the lam after thinking he's the number one suspect in a murder case, and by utter, sheer coincidence keeps tailing the actual assassin.

OK, so this one might be more of a mellow laugh, but it's still a laugh nonetheless. It's a bit surreal, but if you just accept it for what it is, you'll definitely appreciate how weird it is.

Available to stream on Sony Crackle.

A chaste couple's dream of opening a restaurant's about to bite the dust...until the realize they can exploit the creeps and perverts around them for cold hard cash. As for the bodies, turns out other restaurants are always on the lookout for cheap meat.

Available to stream on The Criterion Channel and Kanopy.

Anchorman's pure non sequitur humor may put some off, but if you're not among them then this '70s-inspired flick might have you asking whether you also love lamp.

Available to stream on Cinemax.

This rom-com is especially good for one of those my-love-life-sucks-and-everything-is-falling-apart days. It has a knack for making you feel better about everything and anything.

This is as close to a life-action Warner Bros. cartoon as you'll get. During one rough plane ride, passengers and crew members must work together to land safely while facing countless knee-slapping misunderstandings.

Available to stream on Showtime, DirecTV, and Fubo.

Featuring an all-star cast including Kirstin Dunst, Denise Richards, Brittany Murphy, Amy Adams, Kirstie Allie and Ellen Barkin, this is the story of a small-town pageant whose competitive spirit gets way out of hand.

Available to stream on Popcornflix.

Eddie Murphy covers multiple roles, but mostly plays Prince Akeem, escaping an arranged marriage and coming to (where else) Queens to find a perfect bride.

Available to stream on Fubo and Sling.

This brings it full-circle from Wet Hot American Summer. John Cusack, Demi Moore and Bobcat Goldthwait end up saving houses, escaping biker gangs, and a lot more during what was supposed to be a sleepy summer vacation to New England. (For the winterized version of this, check out Better Off Dead).

Available to stream on Starz and DirecTV.

This article was originally published on Sep. 5, 2014