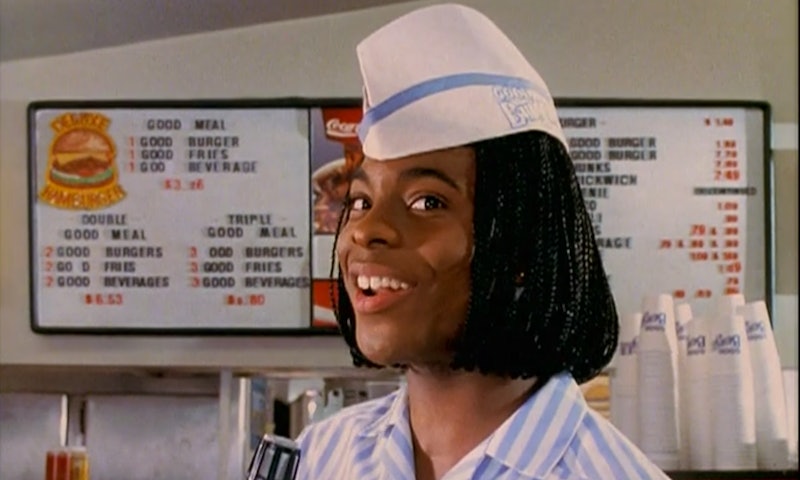 "Welcome to Good Burger, home of the Good Burger. Can I take your order?" might be one of the most recognizable phrases to older Millennials who grew up watching Nickelodeon's answer to Saturday Night Live, the sketch comedy show All That. Furthermore, they might recognize the phrase from the All That sketch-turned-full length movie, Good Burger. On the occasion of its 20th anniversary, it's only right to celebrate Good Burger for all its ridiculous moments, as well as the delightful comedic stylings of duo Kenan Thompson and Kel Mitchell.

Once you look past the delicious Good Burgers smothered in Ed's special sauce (seriously, it's hard not to get hungry watching this movie), you may begin to realize this film is full to the brim with silly, over-the-top moments and well as some that make you say, "What just happened?" Like, why is Ed showering in his Good Burger uniform? Why doesn't Ed goes to high school like Dexter? How do Ed and Dexter survive some many car-related accidents and huge falls? And crucially: what is in Ed's special sauce that is making people lose their damn minds?

This is just the tip of the Good Burger iceberg. Read on to see what else is so wonderfully ridiculous about this film.

1. A Good Burger Talking To Ed In Literally The First Minute

Barely a minute into the film, Ed is spoken to by a sentient Good Burger. What the heck?

OK, so it's just a dream sequence but wow, the hamburgers have really worked their way into Ed's subconscious on a concerning level.

4. A Baby Is Accidentally Used As A Basketball

This is real. This is very, very real.

It's easy to see how to rigidity of Mondo's training might be unnerving, but it's really not that intense, Dex. C'mon. Watching him struggle to put a burger together was pretty weird.

Uh, Ed, you're not supposed to be inside the machine when you fix it. Also, just turn in on, my guy.

Surely it's a health and safety hazard to drive a car that half-shaped like a hamburger?

8. Ed Listening To The Mondo Burger Vs. The Good Burger

In an attempt to get insight into the Mondo Burger competition, Ed tries to tell the difference between the two burgers. Trying to see what sounds they make is a really unusual way of going about it.

The rollout of Ed's special sauce apparently causes Good Burger customers to order a ton of burgers for one order, but why? It can't be that good... can it?

10. Dexter's Contract With Ed For The Good Burger Sauce Profits

Watching Dexter scheme and cheat Ed of his rightful profits is just plain nutty. Not cool, Dex. Not cool.

Great for showing you're dedicated to the best service possible, but not exactly the best way to show it.

Isn't Roxanne a full-grown adult? And isn't Ed a teenager? Isn't this all kind of illegal?

The fact that Ed can hit a golf ball so hard it perfectly ricochets and hits Roxanne is a bit out there.

15. Ed Can Communicate With Dogs

That's right: when a dog runs up to Ed and Dexter, Ed can somehow understand everything that the dog is barking.

16. Ed & Dexter Dress As Women To Do Recon On Mondo Burger

It's a bit problematic and just totally nutty that the guys would do this, all in the name of finding out what Mondo Burger puts in their burgers.

What the heck? So, in order to prevent them from talking about what Mondo Burger does to the meat, Ed and Dexter are put in an asylum but aren't their parents and co-workers worried about where they are?

Ed manages to put together a perfectly choreographed dance routine together while he, Dexter, and Otis are in the asylum (complete with a George Clinton cameo) and it's so silly.

20. Ed Tries To Go Through A Ventilation Shaft Into Mondo Burger

It's understandable Ed and Dexter want to get proof ASAP that Mondo Burger is messing with their meat, but not doing it safely is very odd.

21. Kel Messes With The Mondo Burger Meat & The Story Explodes

OK, that's a bit hyperbolic, but so is the fact that a vat of ground beef would expand to the point that a store would get torn apart from the floor to the ceiling.

So, dudes, are you ready to re-watch Good Burger and get your fill of all these ridiculous moments one more time?