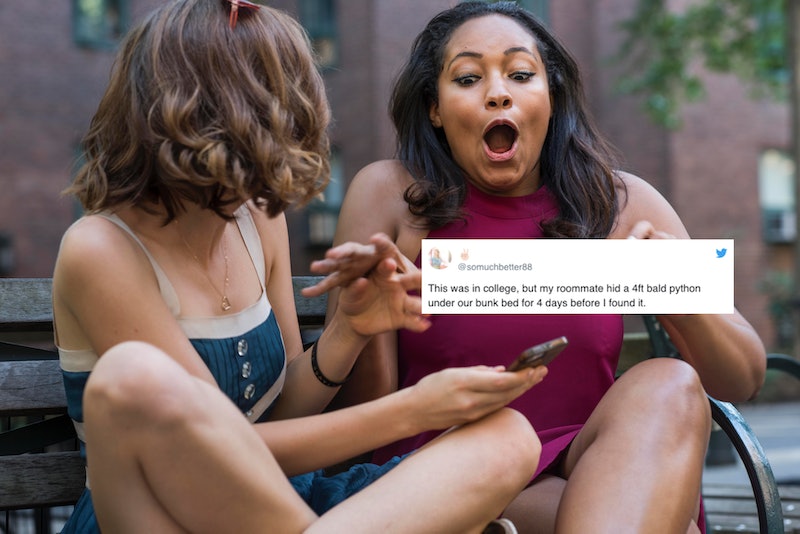 I once had a roommate who didn't pay rent for three months and then barricaded himself inside my house when I asked him to move out. If you've ever had roomies, then you likely have a few tales like this, and you're not alone. These roommate horror stories on Twitter will definitely keep you up at night wondering what the hell is wrong with people. Because it's not you — it's them. Obviously.

With a decent apartment costing eleventy million dollars and jobs paying far less than you deserve, roommates are pretty much a necessity. After a murderous roommate horror story came out this week in New York magazine, some people are rethinking that whole roommate thing. But, unfortunately, you don't always have a choice. In Los Angeles, the situation has become so dire that people are posting ads to share bedrooms, to rent out vans and RVs as faux tiny houses, and to couch surf. The housing struggle is real, and finding a good place to live with people who share your sensibilities can be challenging AF.

Roommate drama is definitely a common topic among my friends. Luckily me and my current roomie get on like peas and carrots. Because we've both had enough bad roommates to last a lifetime, we made sure we were on the same page before we moved in together. Whether you're in roomie hell or cohabitation heaven, most of us have been there, and we have the receipts to prove it.

1. When Your Roommate Uses Rent Money To Join A Cult

OK, this is why it's important to make sure you're both on the lease. If you're paying your roomie, instead of your landlord you could end up in this situation.

2. When Your Landlord Is A Creeper

Yup, I've been there. When I first moved to L.A. I had a landlord who changed my locks when I was on vacation in Hawaii. My packages were regularly stolen, and when I moved out she sent me multiple threatening emails. A year later she tried to connect with me on LinkedIn. Um, no.

3. When They Hide Snakes Under Your Bed

Oh. My. God. This makes that episode of Friends where Chandler's new roomie pretends the cracker goldfish is real seem totally reasonable.

4. When They Won't Let You Come To The Party

If your roomie barricades you in or out of your home, it's time to move on. When my roommate barricaded himself inside of my house, I had to climb through the window. He moved out a day later, but not without leaving me with three months of unpaid bills and his dog.

5. When They Bring Home Mutant Rabbits

That dog my roomie left me with, he found it when he was walking home drunk. I still have no idea where the dog came from even though I tried to find the owner for months.

6. When They Have Sex Parties

7. When Have Bad Boundaries

While roomies share a lot of things, toothbrushes are clearly off limits. If you don't trust your roommate to not use your toothbrush on their own teeth, or to clean the toilet, it might be best to lock it up in your room.

8. When They Have A Pretend Baby

This person's roomie is taking a page straight out of Val's book on Will & Grace. Like that time she broke into Jack's apartment, surprised him in bed, and claimed to be carrying his child.

9. When They Do Drugs In The Attic

I mean, did this roomie really not know this was wrong? I guess everything is subjective.

10. When They're A Criminal

If your roomie is constantly bringing home rad but expensive stuff with no explanation of how they paid for it, that's a red flag.

11. When They're Afraid Of Showers

Hey, to each their own, but let's get one thing straight. Bathing in the kitchen sink is not acceptable (and neither is anything on this list).

12. When They Demand Naked Hugs

While you might not think you need to ask a potential roommate about what they think of naked hugs, this tweet proves that this question is not only reasonable, but necessary.

13. When They Won't Use The Toilet

"Let me introduce you to the toilet" is not something you would ever expect to have to say to a roommate. Add this one to your list of roomie interview questions if you'd rather not have to utter this phrase later.

14. When They Cook In The Bathroom

While it might seem like overkill to label the kitchen and the bathroom, along with a list of appropriate uses for each, it could save you some stress in the long run.

15. When They're Straight Out Of A Horror Movie

I don't even know what to say about this one. Perhaps this was a YouTube DIY beauty blog epic fail. The only way to know for sure is to ask her mom.

I'm all for cleansing rituals, but at least ask first before you destroy an innocent soup pot.

And, for the win, a leather-clad cat who has sex in the bathroom. Terrified of getting a new roommate? You can increase your chances of getting someone who doesn't hide snakes under your bed if you ask some questions first. But, if your roomie wears pants and doesn't meow, it's almost like you've won the roommate lottery.

More like this
Pret & Costa’s Coffee Is The Strongest On The High Street, According To Which?
By Sam Ramsden
Ashamed Of Your Screen Time Stats? Here's How To Change That
By Alexis Morillo
Learning To Love, Not Judge, The Lunchbox Wives Of TikTok
By Esther Zuckerman
23 Super Sweet Things To Write In A Valentine's Day Card
By Karen Belz and Lexi Inks
Get Even More From Bustle — Sign Up For The Newsletter
From hair trends to relationship advice, our daily newsletter has everything you need to sound like a person who’s on TikTok, even if you aren’t.