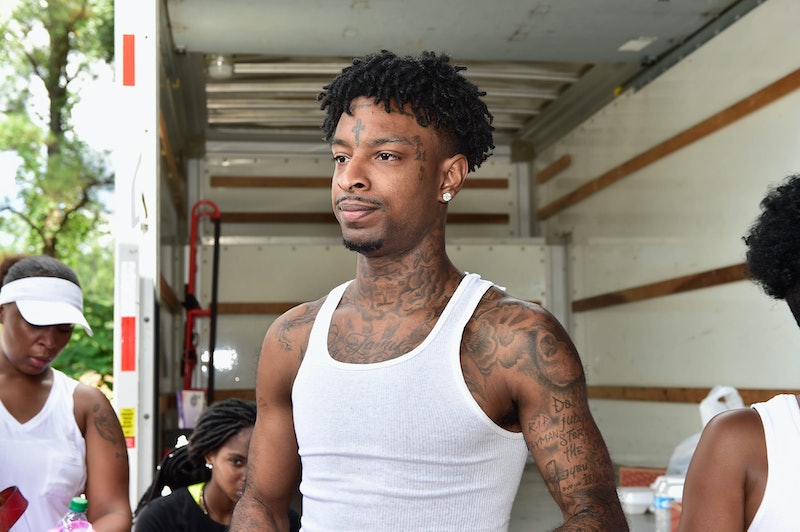 In his first interview since being released from U.S. Immigration and Customs Enforcement (ICE) custody, rapper 21 Savage spoke out against ICE, claiming they "targeted" him and admits he had concerns about being deported. Federal immigration authorities took 21 Savage into custody in Atlanta. Georgia, earlier this month after alleging he'd long overstayed his visa. On Wednesday, he was released on bond.

"I was just driving. And I just seen guns and blue lights. And, then, I was in the back of a car. And I was gone," 21 Savage, whose legal name is She'yaa Bin Abraham-Joseph, said in an interview with Good Morning America that aired Friday. "It was definitely targeted. There was helicopters," he added later.

The rapper also claimed that ICE officers didn't inform him that he was being arrested. "They didn't say nothing," he said. "They just said, 'We got Savage.'"

In the interview, 21 Savage also admitted he now has concerns about potentially being deported. "Yeah," he said when ABC News' Linsey Davis posed the question. "But I feel like I done been through so much in my life, like, I learned to embrace the times when I'm down 'cause they always build me up and take me to a new level in life."

At the time of his arrest in early February, an ICE spokesperson told The Atlanta Journal-Constitution that 21 Savage was an "unlawfully present United Kingdom national." ICE claimed the rapper legally entered the country as a teenager in 2005, but had since been overstaying the now-expired 12-month visa he'd come in on.

The law firm representing 21 Sagave, however, has suggested that his entry in 2005 was more like a return home than a first entry. In fact, they've claimed the rapper was actually legally brought into the United States for the first time when he was 7 years old, suggesting he's a Dreamer. They've alleged that 21 Savage stayed in the country until 2005, at which point he returned to the United Kingdom for approximately one month and reentered the United States on a valid H-4 visa. What's more, they've claimed that 21 Savage "has been continuously physically present in the United States for almost 20 years, except for a brief visit abroad."

Speaking to Good Morning America, 21 Savage said that in his eyes, he was from Atlanta. He also claimed he hadn't been aware that the visa obtained for him in 2005 had expired in 2006 as he "didn't even know what a visa was." The rapper also explained that his family had returned to the UK in 2005 to attend his uncle's funeral. "We went back to go to his funeral and then we came back," he said, adding that he thinks the reentry confused ICE. "So that's why I think [ICE] got it confused where they thought, like, that was my first coming."

The rapper's arrest and detention came less than a week after he ad-libbed lyrics critical of the Trump administration's zero-tolerance immigration policy into his song "A Lot" while performing on The Tonight Show Starring Jimmy Fallon. According to Spin, 21 Savage added the lines: "Been through some things so I can't imagine my kids stuck at the border/ Flint still need water/ People was innocent, couldn't get lawyers" to his song. That verse reportedly also appears on an extended version of the song used in the rapper's recent music video, according to Complex.

But while the rappers' legal team has said they believe ICE targeted their client because of his lyrics, 21 Savage told Good Morning America he "didn't really know" and "really can't say" if that had anything to do with it. According to Complex, 21 Savage sought to gain legal residency in the United States in 2017 by filing for a U visa, which remains pending.