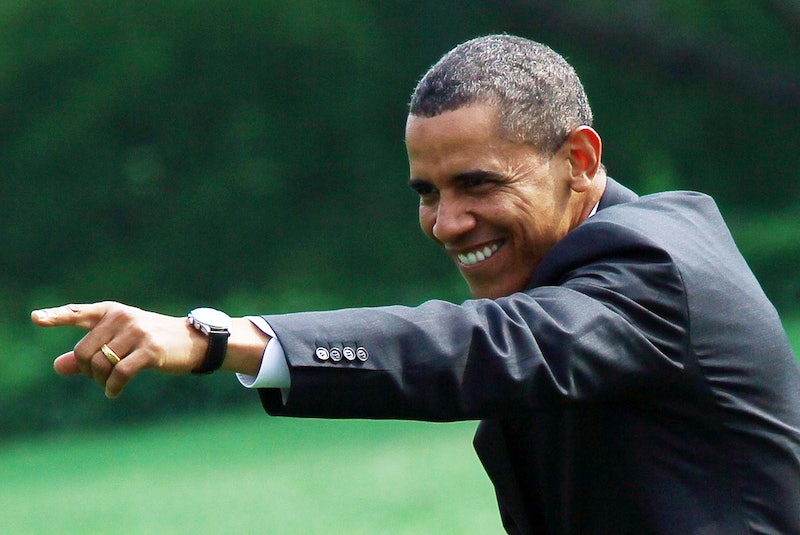 Friday marks Barack Obama's 56th birthday, and fans of the president on social media are using it as an excuse to honor the former president's legacy. To celebrate his first birthday since leaving the White House, Obama will spend the weekend relaxing on Martha's Vineyard with his family, making the most of his life as a civilian. Since leaving the White House, Obama has taken trips to Indonesia and Italy, played golf in Hawaii, and made an unexpected appearance in New York City. But he has also remained politically engaged, and Twitter users are using #ObamaDay tweets to honor that legacy.

This is not the first time the hashtag has been employed. April Reign, who also launched the #OscarsSoWhite Twitter campaign, proposed that Election Day be called "Obama Day" instead, and encouraged fellow Twitter users to use the #ObamaDay hashtag to look back on their favorite moments of Obama's presidency.

Even as Obama has been vacationing around the world, he has continued to urge his fellow Americans to fight for their rights, even though he rarely mentions Donald Trump by name. The #ObamaDay tweets for his birthday showed that many people still wish Obama were president — and many Twitter users also used the hashtag to indirectly criticize Trump. Let's take a look at how Twitter is celebrating Obama's 56th birthday.

Reign, of course, had the perfect tweets for the occasion:

While some Twitter users longed for the days when Obama was president — or, as in the above tweet, pretended that he had never left office — others were more explicit in their opposition to Trump.

Many people responded to Reign's original request by sharing their favorite photos and memories of Obama.

Scrolling through the feed, you'd notice that some racist tweets and memes also appeared in the #ObamaDay feed — an apparent attempt by Trump supporters and far-right users to hijack the hashtag — but they were largely drowned out by the tweets celebrating Obama.

It seems as though Obama's birthday is the happy occasion that Twitter desperately needed to celebrate in the current political climate.

Most of the people tweeting under the #ObamaDay hashtag would probably agree with this sentiment:

Even though Obama has left office, he has certainly not left the American people behind. Despite rarely taking Trump on directly, he has reminded Americans that they have a constitutional right to protest, and wrote a lengthy defense of the Affordable Care Act on Facebook.

In the era of restrictions in immigration, travel bans, reversals of protections for LGBTQ students, and other worrisome executive orders, it is understandable that Twitter has turned to Obama — who has only seen his approval numbers rise since leaving office — to find something to celebrate.