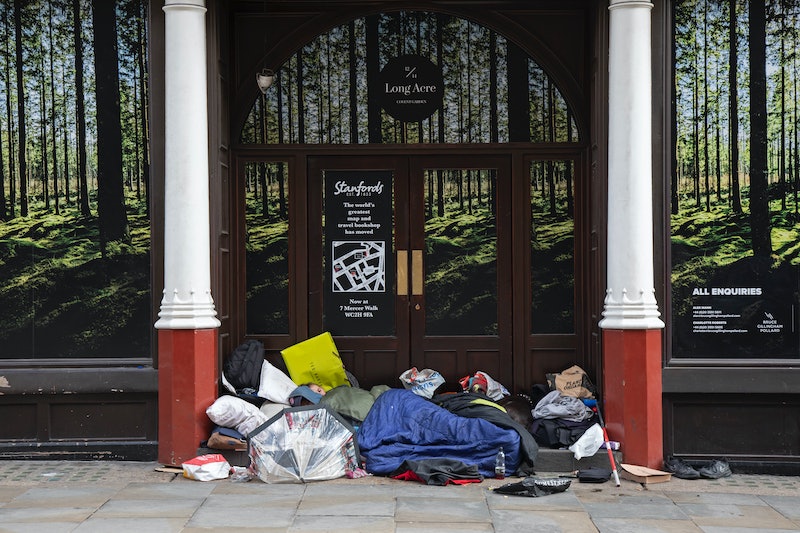 Christmas is a time of giving, or so the saying goes. While gifting presents to family, friends, and colleagues is de rigueur, giving to strangers is a rare occurrence for many. But fresh statistics detailing the youth homelessness crisis show that it should be at the forefront of all our minds. According to a new report from homelessness charity Centrepoint, more than 22,000 young people are at risk of homelessness this Christmas.

If you need an idea of the scale of that figure, it's more people than can fit in the O2 Arena. And it's likely to be much higher. Centrepoint obtained this figure by examining data from local authorities across England. But around two thirds of single people without a home are referred to as "hidden" homeless people, meaning they won't be included in statistics.

The charity also surveyed over 200 young people in England and Wales who are currently living in homelessness accommodation. The findings reveal the stark reality of having nowhere to live.

Almost four in 10 were forced to choose between staying in an unsafe home or becoming homeless. In fact, almost two thirds of those surveyed became homeless due to family problems. Sofa surfing was an experience 73% of respondents had had. This relies on the goodwill of others, but it can also leave young people in dangerous situations.

As well as external pressures, young homeless people face the risk of abuse and violence. One in five of the young women surveyed said they had been a victim of sexual assault, while 15% of total respondents had been mugged and 30% had experienced physical assault. Rough sleeping — that is, sleeping in the open air or in the likes of train stations and cars — was also common; more than six in 10 had done it.

According to Centrepoint, council budget cuts mean that young people aren't being given enough support and are sometimes even turned away from shelters and refuges. The charity has set up a petition to urge the next elected government to invest in affordable housing and give young people adequate support — both financially and socially.

And it's asking for your help. You can volunteer, donate, fundraise, or take part in an organised event. Volunteering is one of the most versatile options, offering roles in helplines, coaching, and tutoring. (These opportunities are available in London, Barnsley, Bradford, and Sunderland.)

You can also raise money by sleeping outside one night. (Large-scale events held across the country can be found here.) Alternatively, choose your own way to fundraise; Centrepoint can provide you with balloons, sleeping bags, T-shirts, and more. And if fitness is more your thing, join an organised half marathon or walk. There's plenty coming up in 2020.

Lastly, you can always donate. Monthly or one-off donations are accepted, and even a small amount can greatly benefit a young person in need of support. Just £5 will pay for essentials like toothbrushes and bed sheets, £12 will sponsor a room, and £35 will go towards funding life skills and overall independence.

More like this
Here’s Where The NHS Nurses’ Strike Currently Stands
By Sophie McEvoy
Gen Z Are Twice As Likely To Identify As Queer, According To New Data
By Sam Ramsden
Pret & Costa’s Coffee Is The Strongest On The High Street, According To Which?
By Sam Ramsden
This Is When Netflix Is Going To Start Charging You For Sharing Passwords
By Darshita Goyal
Get The Very Best Of Bustle/UK
Sign up for Bustle UK's twice-weekly newsletter, featuring the latest must-watch TV, moving personal stories, and expert advice on the hottest viral buys.