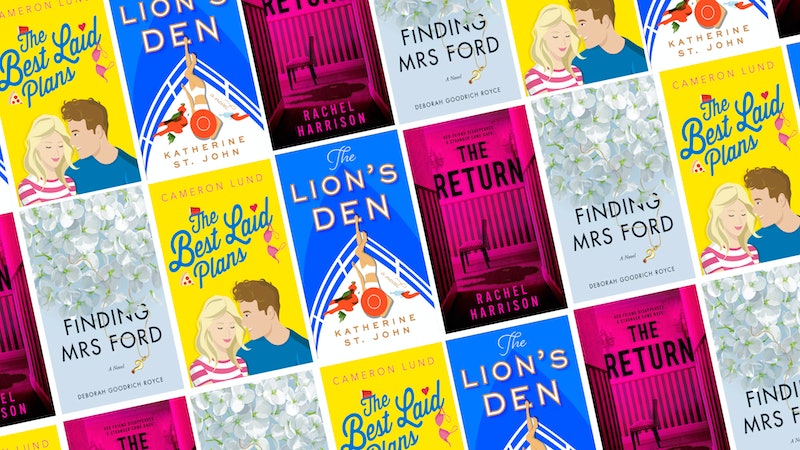 The novel coronavirus has come to impact almost every familiar industry in our lives, and publishing is no exception. Travel advisories, shelter-in-place orders, and social distancing protocols have become the new normal over the last few months, as experts work to contain the spread of the coronavirus. In our continued search for new ways of living life remotely, we've seen talk shows performed in front of empty studios, concerts held remotely, and movies released on demand — all in an effort to please fans and keep everyone safe. As part of this shift, debut authors have found their promotional book tours, appearances, and other events postponed, rescheduled, or canceled outright.

It's hard enough to find an audience as a debut author, but without traditional publicity strategies in place, it can be nearly impossible. So Bustle has compiled a list of 23 debut books that had their launches impacted by the effects of the coronavirus pandemic, to help give them the recognition they deserve.

My Autobiography of Carson McCullers by Jenn Shapland

My Autobiography of Carson McCullers combines research into the Ballad of the Sad Cafe author's life with connections to Jenn Shapland's. Ultimately a treatise on seeing yourself in someone else, Shapland's debut is a poignant memoir that's well worth reading.

The Companions by Katie M. Flynn

The fact that Katie M. Flynn's The Companions takes place in a version of California under quarantine during a viral pandemic should have made it one of the year's most talked-about books, but the novel ultimately got lost in the media shuffle. Centering on a 16-year-old who has traded death for servitude under a new, consciousness-extending program, this is a great book to shelter-in-place with if you need catharsis.

A fun, twisty thriller that deserves to stand out, Stephanie Wrobel's Darling Rose Gold draws from the story of Dee Dee Blanchard's murder to tell the story of a mother-daughter reunion marred by lies and intrigue. Five years after her testimony sent her mother, Patty, to prison for child abuse, Rose Gold Watts appears to be ready to make amends, much to the surprise of their conservative community. But all is not as it seems, and readers will spend all of Darling Rose Gold wondering which of the Watts women really has the upper hand.

The Return by Rachel Harrison

Rachel Harrison's formal launch party for her debut novel was replaced by a family-and-friends celebration that her husband threw for her on Zoom — which is pretty dang cute. The Return centers on Julie, who disappeared two years ago while she was on a hike. Now she's back, with no memory of what has transpired over the 700-plus days she's been missing. Julie isn't the same person, and her BFF Elise knows it, but how can she break through the other woman's amnesia to get to the truth?

Weird: The Power of Being an Outsider in an Insider World by Olga Khazan

Journalist Olga Khazan's debut book examines the cultural significance of weirdness. Although it may not satisfy neuroatypical readers who pick it up looking for commiseration, Weird will make anyone who feels like a fish out of water in their typical environment feel a little less anxious about the world around them.

Two things just happened to Keely. She turned 18 and — thanks to her friend having a romp at her birthday party — became the least sexually experienced member of her clique. Keely really wants to hook up with Dean, a college guy she's just met, but she doesn't want him to know she hasn't done this before. Thankfully, she's got her BFF, Andrew, to help her out, and they could never ever develop feelings for one another... right?

Queen of the Owls by Barbara Linn Probst

A scholar interested in Georgia O'Keefe's paintings finds herself at the center of a controversy when a photographer exhibits nude photos of her without her permission. A mother and ABD, Elizabeth fears for her reputation and career, and for good reason. She's soon caught between praise from her students and her University's ire.

The first novel from All My Children actress Deborah Goodrich Royce, Finding Mrs. Ford offers a searing glimpse into the dismantlement of one woman's picture-perfect life. Susan Ford has everything she could ever hope for in her carefully curated life, but her public image is marred when the FBI turn up on her doorstep. They have an Iraqi man in custody, and they're demanding answers from Susan, whose connections to the prisoner and his homeland stretch back decades into the past.

Living in New York after the Civil War, Emily Warren Roebling appears to have constructed a happy life in the conflict's brutal aftermath. She's married a dashing captain, and everything is perfect... until his father begins constructing the Brooklyn Bridge. Serving as the operation's Chief Engineer, Washington Roebling comes down with the bends, leaving Emily — a socialite with no formal training in any related subject — to take over the project from him. Based on a true story, Tracey Enerson Wood's historical novel deserves your attention this spring.

The Big Finish by Brooke Fossey

At age 88, Duffy Sinclair has a good thing going, relatively speaking. He's got a quiet life in a nice assisted-living facility, and all he's got to do to maintain his lifestyle is keep his nose clean. But when his stuffy roommate's granddaughter, Josie, shows up on the run from her abusive boyfriend, Duffy can't quite help himself. Soon, he and Josie are on the lam, and all he has to do is lean heavily onto his past to help his new friend secure her own future.

The coronavirus pandemic forced Hao Jingfang to cancel her trip to the U.S. to promote her debut novel, but you can still enjoy reading it right now. Vagabonds takes questions of immigration and identity and explores them on a galactic scale. Following a war that won the Mars colonies their independence, children have been sent from the red planet to live on Earth. Now, they've returned to Mars, but it no longer feels like home.

The House of Deep Water by Jeni McFarland

A single mother of two teenagers, Beth's on a collision course as she and two other women — Linda, Beth's former babysitting charge, and Paula, Linda's mother — return home to River Bend, Michigan to weather out the storms in their respective lives. River Bend hasn't changed much in all the years they've been gone, and the town has its own secrets, independent of theirs, that it wants to keep.

Martha's Vineyard, 1962. Wellesley student Heddy takes a job nannying for a wealthy, young, picture-perfect couple on the idyllic Massachusetts island. Surrounded by the rich and occasionally famous, Heddy finds herself enamored by Martha's Vineyard's elite. But as the summer drags on, she begins to see through the cracks in their finely crafted veneers.

Catherine House by Elisabeth Thomas (May 12)

Searching for a place to belong led Ines to Catherine House, a unique college nestled deep in the heart of a Pennsylvania forest. The institution has given rise to a number of world-shakers and game-changers, all at a price — total secrecy and seclusion. Ines had prepared herself for the change of pace Catherine House is sure to offer, but she can't imagine the darkness that lies behind and beneath the college's reputation.

The Jane Austen Society by Natalie Jenner (May 26)

A century and a half after Jane Austen called it home, the town of Chawton isn't much to look at. When Austen's family's estate is threatened, a group of seven disparate individuals unite to save it from ruin. As their lives spiral into uncertainty in the postwar period, the members of the newly minted Jane Austen Society find purpose in rescuing their beloved author's legacy.

The Talking Drum by Lisa Braxton (May 30)

Former television journalist Lisa Braxton will publish her debut novel this year, in spite of her recent promotional appearance's coronavirus-related cancellation. Set in a fictional Massachusetts town in 1971, The Talking Drum takes on the weighty issues of gentrification and immigration as it explores the lives of the town's black families, each of whom will be greatly impacted by the transformation of their little hamlet.

The Lightness by Emily Temple (June 16)

A year after her father disappeared while on a wellness retreat, Olivia leaves home to find out what happened and where he wound up. She arrives at the Levitation Center, signs up for a summer retreat, and befriends three girls, with whom she hopes to learn how to defy gravity. But as the weeks roll on, Olivia begins to realize that she and her friends may not survive their upcoming ordeal.

What's Left of Me Is Yours by Stephanie Scott (June 23)

Kaitarō is a wakaresaseya, a person hired to entice married people into having affairs, so that their spouses can come out on the "winning" side of their impending divorces. Satō wants him to seduce his wife, Rina, and walk away, but fate has other plans. As Kaitarō and Rina fall in love, their affair leads to a tangle of desperate circumstances that Rina's daughter, Sumiko, must later work to unknot.

Summer, her boyfriend, her BFF Belle, and a host of other young women set sail aboard the titular yacht in this debut thriller from Katherine St. John. While touring the Mediterranean on the Lion's Den, Belle and Summer's other "friends" find themselves in dangerous waters. Trapped aboard the yacht, Belle realizes that Summer isn't who she thought she was, and that she'll have to maintain constant vigilance in order to return home alive.

Sara Faith Alterman's debut memoir, Let's Never Talk About This Again, examines her relationship with her father, the author of pornographic books. Years after she discovered, at age 12, that her father was not the mild-mannered guy she'd always thought he was, Alterman was tasked with helping him to begin his writing career anew, following his Alzheimer's diagnosis.

Every Bone a Prayer by Ashley Blooms (Aug. 4)

A 10-year-old girl growing up in a volatile environment lives in a world made up of equal parts magic and horror in Ashley Blooms' Every Bone a Prayer. Misty can speak to the crawdads and other critters in the holler, but she often finds herself unable to understand the people around her. When tragedy strikes, that communication barrier grows even wider, and Blooms' novel becomes an examination of connection and grit.

Janella Angeles' first novel is also a series opener. Set in a world alive with magic, Where Dreams Descend centers on Kallia, Jack, and Demarco — three people brought together by a competition for fame and glory that ends with several magicians missing and everyone under a cloud of suspicion. Who is stopping the competitors from joining the Conquering Circus, and can they themselves be stopped before it's too late?

With humanity headed for extinction, a technological revolution, birthed by necessity, leads to a generation of children mothered by artificial intelligences. All of the Mothers are unique, just like human women, but, as Kai and his cohort of robot-borne babies grow up, they find their Mothers' attitudes and behaviors have shifted in ways no one anticipated.