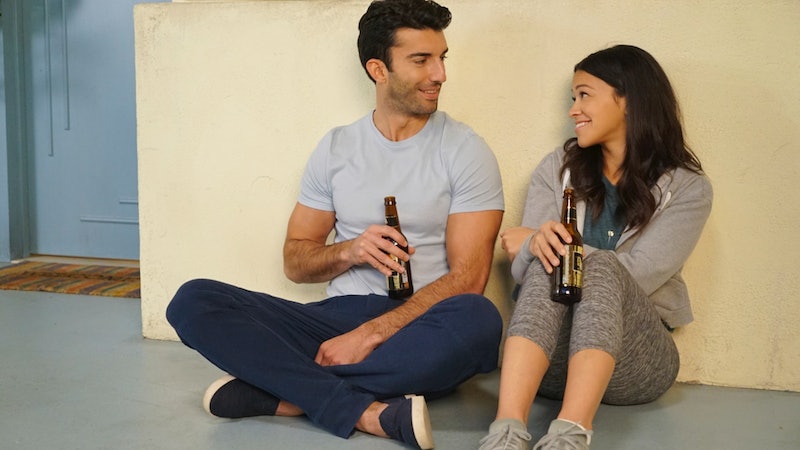 Getting invested in a great TV show is often dependent on falling in love with the characters at its center. This can also mean developing some pretty intense preferences for which person your series' lead character ends up with. But, no matter if the show went on for a decade or only a few seasons, there are just some memorable TV love triangles that will forever cause a stir in their respective fandoms.

Love triangles can be separated by generations. What was one age group's Beverly Hills, 90210 saga involving Dylan, Brenda, and Kelly is another generation's One Tree Hill triangle where Lucas chooses between Brooke and Peyton. Not all triangles are created equal in the eyes of some fans. (I mean, was Rachel ever going to end up with someone not named Ross?) But for some shows, fans were strictly divided over which ship would sink or sail.

Many of these love triangles had very decisive endings where Carrie, once and for all, ended up with Mr. Big or Blair forever said her Three Words to Chuck. While other series' love triangle history are currently being written. (We're looking at you, Jane the Virgin and Younger.) But no matter which of these 23 love triangles gets your heart rate up, and there will be a few, remember to remain calm and ship on.

This love triangle of the Upper East Side tore fans apart while the series was airing. Were Blair (Leighton Meester) and Chuck (Ed Westwick) always destined to scheme together? Or was Nate (Chase Crawford) a low-key better option? We'll never tell, XOXO, Gossip Girl.

When fans were taking a break from fighting over Blair's one and only, they could delve into a different love triangle. Serena (Blake Lively) and Dan's on-and-off became so exhausting that, once again, Nate seemed like a viable option for our heroine's heart. But something tells us ~Gossip Girl~ wouldn't have liked that very much.

Scandal gave us new intrigue and secrets on the weekly, but one of the dramatic mainstays of the series was whether D.C. fixer Olivia Pope (Kerry Washington) was meant for President Fitz (Tony Goldwyn) or B6-13 official Jake (Scott Foley). In the end, the heart wanted what it wanted. And (once again as you'll see below) Foley's character wasn't it.

4. Sex and the City: Carrie/Big/Aidan

From the beginning Carrie Bradshaw (Sarah Jessica Parker) proclaimed that she was looking for her "Big" Love, and she sure seemed to find it, then lose it, then find it again with Chris Noth's Mr. Big. But while Big did some major emotional warfare on Carrie's heart, furniture maker-turned bar owner Aidan (John Corbett) seemed to be a more stable option. But since when did Carrie go for stability, when a pair of shiny stilettos was always around the corner?

SATC co-creator Darren Star delivered another satisfying love triangle on Younger, where Liza (Sutton Foster) is torn between her younger alter-ego lifestyle with Josh (Nico Tortorella) and her boss in the publishing industry Charles (Peter Hermann). As Season 6 approaches, this triangle's outcome is totally undecided.

One Tree Hill always delivered its fair share of relationship drama. It wasn't uncommon for love triangles to warp into quadrangles. But at its core, fans were invested in whether Lucas (Chad Michael Murray) would choose Brooke (Sophia Bush) or Peyton (Hilarie Burton). Then again, was there ever another girl for Lucas after their star-crossed episode one interactions?

This was the OG teen drama love triangle. Dylan (Luke Perry) was torn for much of the series between Brenda (Shannen Doherty) and Kelly (Jennie Garth) and fans are still uber-protective over their pick.

Once again, Scott Foley's character loses out to the far broodier option of the two. Even though Felicity (Keri Russell) developed strong feelings for her sweet best friend Noel, Ben (Scott Speedman) was a main driving force for our heroine's affections, for better or worse.

For those watching Gilmore Girls from the beginning, it seemed as if Lorelei (Lauren Graham) and Luke (Scott Patterson) were meant for a caffeine-fueled romance. But Rory's dad Christopher (David Sutcliffe) always seemed to be lurking, culminating in an ill-timed marriage between Lorelei and Christopher in Season 7. (Yes, that actually happened.)

For a town as small and insular as Stars Hollow, Rory (Alexis Bledel) had her fair share of love interests. Each represented a different part of her identity. Dean (Jared Padalecki) was her sweet first love, Jess (Milo Ventimiglia) the soulful bad boy, and Logan (Matt Czuchry) the Yale classmate. This debate hit a high-note during 2016's A Year In the Life, when each man returned for the four-part limited series.

Jane the Virgin turned the telenovela-inspired drama up when it came to whether Jane (Gina Rodriguez) belonged with Michael (Brett Dier) or Rafael (Justin Baldoni). The debate rages on.

We stan a love triangle that involves siblings. TVD delivered with a show in which Elena (Nina Dobrev) had her pick of both Salvatore brothers Damon (Ian Somerhalder) and Stefan (Paul Wesley).

Can there ever really be a Vampire project without a love triangle at its center? True Blood had fans invested in whether Sookie (Anna Paquin) would eternally devote herself to Eric (Alexander Skarsgard) or Bill (Stephen Moyer). Moyer and Paquin were hitched in real life, which could make for some awkward dinner conversations.

For some, this was less of a viable love triangle than it was a left-field detour when Joey (Matt LeBlanc) began vying for Rachel's (Jennifer Aniston) heart, seasons after Ross's (David Schwimmer) love for her had been established. For others, it was the pairing that should have been all along.

I mean, this love triangle had some high stakes. When Monica (Courteney Cox) broke up with Richard (Tom Selleck) in Season 2 because he didn't want to have more children, Chandler (Matthew Perry) unintentionally swept her off her feet. But come proposal time, Richard re-entered the picture, begging the question: Was he the man for her all along?

It's a tale as old as time. Will the popular high school quarterback (Cory Monteith) choose the head cheerleader (Dianna Agron) or the nerdy girl he truly loves (Lea Michele)? Somehow, it gets us every time.

The line, "Choose me. Pick me. Love me," was brought to the world courtesy of the love triangle between Meredith (Ellen Pompeo), Derek (Patrick Dempsey), and Addison (Kate Walsh). And no, we'll never be over it.

The question at this show's center: Will Alicia (Julianna Margulies) stand by her cheating politician husband Peter (Chris Noth) or forge a new life with fellow attorney Will (Josh Charles)?

It was nearly impossible not to fall in love with the Texas teens on this show, just as it was impossible not to choose sides when it came to Lyla (Minka Kelly) loving Jason (Scott Porter) or Tim (Taylor Kitsch).

Buffy (Sarah Michelle Gellar) had a lot more on her mind than which man she would fall in love with, but that didn't stop fans from endlessly defending their choice for her between Spike (James Marsters) and Angel (David Boreanaz).

Parenthood was one of the more underrated shows of recent memory, and it developed a juicy love triangle in its later seasons. Sarah (Lauren Graham) is forced to choose between Mark (Jason Ritter), a younger man who was once her daughter's teacher, and Hank (Ray Romano) a more dry and sarcastic man she begins to work with. Fans had a lot to say about the surprising outcome of this triangle.

Lost has absolutely divided fans from its polarizing finale to its central love triangle involving Kate (Evangeline Lilly), Jack (Matthew Fox), and Sawyer (Josh Holloway). As is typical with any good triangle, both men presented totally different paths for Kate. Fans still get ~lost~ in defending their favorite option.

Part of the fun in getting invested in any given love triangle is debating which love interest was right for our favorite TV characters. While shows end, feelings over their love triangles never will.