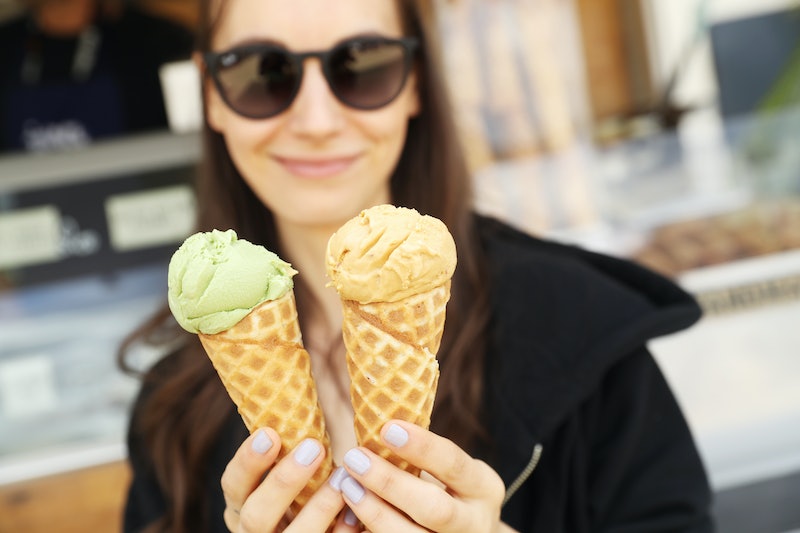 Genetics determine a lot of who we are, from our hair color to our eye color to our height. They also have a hand in determining our preferences: our likes, our dislikes, the things that make us go yum or meh or ew. Now, 23andMe can predict your ice cream preference based on your genetic makeup, using your DNA to see if you, genetically, are predisposed to prefer chocolate to vanilla. Does it sound like a “Pick some nucleotides and I’ll tell you which ice cream is your soulmate” internet quiz? Yes. Will you still swap for results? I mean, you’re here, aren’t you?

As 23andMe notes in their report, which used data from over 980,000 23andMe research participants, your food preferences are influenced far more by things like culture and environment. (It’s probably one of the main reasons we go “icky no” at eating escargot and “yummy yum” when presented with bright yellow chemical cheese goo.) However, 23andMe calls genetics the “cherry on top” to determining the things you like.

“Scientists at 23andMe identified 739 genetic markers that are associated with preferring vanilla ice cream versus chocolate ice cream,” the company states in their email test results. “In addition to genetics, other factors like age, sex, and ancestry can also influence your chances.”

In other words, when you grab a pint of chocolate over vanilla, it may in part be influenced by your genetic makeup.

“A person’s preference may be related to their sense of smell,” 23andMe notes in their report. “Indeed, many of the genetic variants we found associated with ice cream preference are in or near olfactory receptor genes, like OR10A6 and OR5M8. Those genes contain instructions for proteins that help detect odors.” Because taste and smell are linked in our brain, both influence our experience when eating certain foods. Basically, having certain olfactory receptor genes could be the metaphoric cherry-on-top to determining whether you’re Team Chocolate or Team Vanilla.

Overall, the debate over whether chocolate or vanilla ice cream has no clear winner. A survey from the International Dairy Foods Association put vanilla in the number one spot for most popular ice cream flavors. However, chocolate was a close second. Cookies N’ Cream, Mint Chocolate Chip, Chocolate Chip Cookie Dough, and Buttered Pecan also made the list. “Cookie Dough” took the number 9 spot which is...confusing. Who is requesting chocolate chipless cookie dough ice cream? Is this a delicacy I need to indulge in???

In addition to this latest ice cream endeavor, 23andMe has developed four new trait reports: cilantro taste aversion, misophonia, hair thickness, and wake-up time. “The reports also help us understand something else that many of us know already but for which we may still need a reminder — our genetics don’t explain everything,” the report states.

If you aren’t a fan of cilantro, your hatred has been scientifically validated. “23andMe researchers have identified two genetic variants associated with aversion to cilantro in people of European ancestry,” the 23andMe report states. “These two variants are near genes that control the olfactory receptors that determine a person’s sense of smell. Some of these receptors detect something called aldehydes, a compound found in soap, and a major component of the cilantro aroma.” In other words, when people say that cilantro “tastes like soap” they could mean that literally.

Of course, genetics are the be-all, end-all for your preferences. Having the "cilantro-soap" gene doesn't mean you'll hate cilantro. You won't betray your ancestral history by occasionally having a scoop of vanilla ice cream.