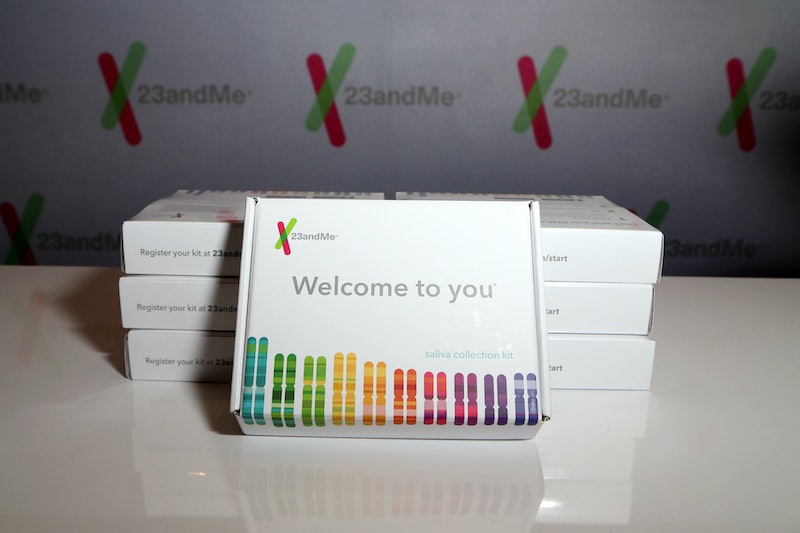 Biotechnology company 23andMe may soon be able to screen its users for a hereditary condition associated with an increased risk for colorectal cancer, according to a recent report by Bloomberg. The company said that the U.S. Food and Drug Administration (FDA) approved their bid to offer their customers a test for a hereditary colorectal cancer syndrome, and 23andMe’s website homepage notes that the new report will accompany its regular health and ancestry-focused personalized report service. As a result, 23andMe will offer its consumers a new colon cancer report alongside the company’s previously existing offerings. Bustle has reached out to the FDA for comment, and we will update this post when we hear back.

The new test would screen customers’ DNA for two genetic variants linked with MUTYH-associated polyposis (MAP), a rare and inherited condition that’s been connected with a predisposition for colorectal cancer. Roughly one out of 100 individuals may carry a single mutation in the MUTYH gene, according to estimates by the American Society of Clinical Oncology, and MAP is caused by possessing two MUTYH gene mutations.

This isn’t the DNA testing company’s first foray into testing for cancer risk. In March 2018, the FDA gave clearance for a 23andMe test that detected heightened risks for developing ovarian, prostate, or breast cancer in consumers. The test had “a lot of caveats,” Donald St. Pierre, the acting director of the FDA's Office of In Vitro Diagnostics and Radiological Health, told USA Today. Some of those caveats included how the test honed in on three genetic mutations in the BRCA1 and BRCA2 genes that are linked with increased risk for breast cancer. But that only covers a small percentage of the population and isn’t comprehensive, since there are more than 1,000 known BRCA mutations. Additionally, critics of the screenings feared that consumers who didn’t have those three particular mutations might conflate those results with not being at any risk for any kind of breast cancer.

It should be noted that the company struggled with FDA approval until only recently. In 2013, the FDA ordered 23andMe to cease selling its home-testing kits, noting that the group was "concerned about the public health consequences of inaccurate results," reported NBC News. In 2017, the FDA gave 23andMe approval to provide risk data for 10 diseases to customers, including Alzheimer's and Parkinson's. “The test should not be used as a substitute for seeing your doctor for cancer screenings or counseling on genetic and lifestyle factors that can increase or decrease cancer risk,” St. Pierre told USA Today in March 2018.

While 23andMe’s test may be helpful with prevention and are a notable advance for the company, they aren’t tools for diagnosing cancer and shouldn't be used as replacements for professional medical attention.