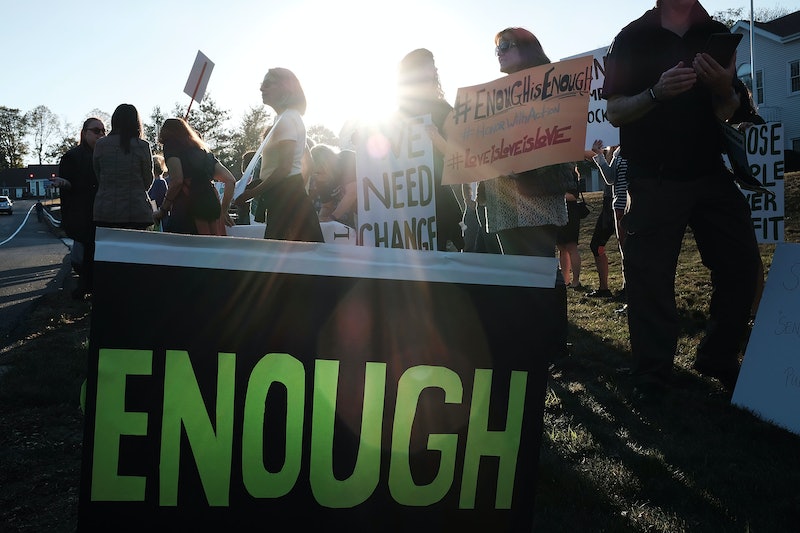 After a gunman took 17 lives at Marjory Stoneman Douglas High School in Parkland, Florida earlier this month, a long list of companies has decided to cut ties with the National Rifle Association (NRA). Some organizations are sticking by the gun lobby's side, however. Here are the companies that support the NRA still, despite what feels like an uptick in mass shootings over the past several years.

Survivors of the Florida shooting have rallied together and are demanding that lawmakers take action to address the availability of semi-automatic weapons in the United States. They specifically accuse the NRA of lobbying politicians to vote in favor of loose gun laws in order to increase its own profits.

A lot of brands that previously offered discounts in partnership with the NRA began distancing themselves from the group in the wake of the tragedy, and many of them cited consumer complaints. In response, the NRA said in a statement:

The loss of a discount will neither scare nor distract one single NRA member from our mission to stand and defend the individual freedoms that have always made America the greatest nation in the world.

Gun control advocates applauded those companies for cutting ties with the NRA and are urging more brands to join them. Activists are also encouraging boycotts of the companies that choose to remain affiliated with the NRA; they even created a Google Doc listing businesses still involved with the organization.

Amazon, along with Apple and Google, has come under fire for supporting NRA TV. Many activists on social media are calling for the streaming service to drop the channel from its offerings. Amazon hasn't released a statement regarding the matter yet.

Activists are also calling out Apple for supporting NRA TV. The company hasn't spoken publicly about the issue.

Google Play offers NRA TV, and many pro-gun control activists are tweeting at the company to drop the network.

According to ThinkProgress founder Judd Legum, Fedex has received thousands of complaints from customers about its relationship with the NRA, but hasn't responded to them.

Roku also offers NRA TV. Roku spokeswoman Tricia Mifsud tells Bustle in an email that NRA TV hasn't violated the platform's content policies, and that the company is "not promoting or being paid to distribute NRA TV."

"We do not and have not ever had a commercial relationship with the NRA," Mifsud writes. "Their channel is free to consumers with no ads. We welcome Moms Demand Action and other important groups to use our platform to share their messages too."

Some people have been calling out specific comedians and actors who have shows on SiriusXM, encouraging them to put pressure on the satellite radio company to distance itself from the NRA.

In addition to reportedly running the NRA's ads, YouTube's streaming service is yet another carrier of NRA TV.

The NRA named the American Cellars Wine Club, Vinesse Wines' flagship location, as its official group. A lot of social media users pointed out that guns and alcohol aren't the best mix.

The luxury hotel chain hasn't yet released a statement concerning their partnership deals with the NRA.

"Our company provides discounted rooms to several large associations, including the NRA," Hotel Planner co-founder Tim Hentschel told Bloomberg. "These associations greatly benefit our customers by buying discounted rooms from groups that might otherwise be charged a penalty by hotels for not using all of the rooms in their block."

The outdoor recreation outlet is under fire for not only supporting the NRA, but also supporting FedEx, which has yet to cut ties with the gun lobby.

The credit card processing company has yet to release a statement regarding its relationship with the NRA.

Lockton is, according to its website, "the world's largest privately held, independent insurance broker." The organization hasn't commented on its ties to the NRA.

Customers are apparently contacting the hunting and outdoor recreation retailer to terminate their accounts because of the company's support for the NRA.

ManageUrID, which allows people to control what personal information about them is accessible on the internet, hasn't commented on its partnership with the NRA.

NetSpend, a pre-paid debit card company, hasn't cut ties with the NRA or addressed its relationship with the gun lobby organization.

Medical Concierge Network's founder, Greg Nassief, told ThinkProgress the company had no comment on its NRA connections, only that it had similar ties "with several entities across all sorts of categories."

According to AGIA's website, the organization has "served as the insurance and member benefits marketing and administration partner to some of the largest and most iconic associations and organizations in the country," including the NRA.

Checks In The Mail

Checks in the Mail, a website that provides checks and stamps for personal and professional use, is sticking by the NRA and hasn't addressed the issue publicly.

This NRA-endorsed member insurance company hasn't issued a statement concerning the mass shooting in Florida or its ties to the NRA.

The electronic healthcare practice, eHealth, hasn't cut ties with the NRA or explained its position on the issue.

Emergency Assistance Plus provides trip protection when traveling in the United States or abroad. The company has partnered with the NRA for years and hasn't commented on the Parkland shooting or its relationship with the gun group.

FFLBizHub.com, a platform that helps individuals and organizations "learn and comply with Federal ATF and State firearm laws," according to its site, is still working with the NRA following the Parkland shooting and benefits from being part of the NRA business alliance.

Global Rescue, a provider of field rescue and evacuation services, continues to work with the NRA and hasn't released a statement on the matter.

In addition to these companies, there are many other local organizations that support the NRA, and you can find a full directory of them on the group's site. But it's clear that more and more businesses are choosing to sever their ties with the NRA as the gun control debate continues in the wake of the Parkland shooting. Given the momentum behind the #NeverAgain movement, which was started by the Parkland survivors, it looks like there may be more to come.

More like this
How To Support Gun Control Reform Right Now
By Morgan Brinlee and Carolyn Steber
How The City Healed Five Years On From The Manchester Arena Attack
By Ella Glover
What Is Barack Obama’s Net Worth? He Makes *Way* More Now As An Ex-President
By Hugh McIntyre
7 Gun Control Advocates To Follow On Twitter
By Madhuri Sathish-Van Atta
Get Even More From Bustle — Sign Up For The Newsletter