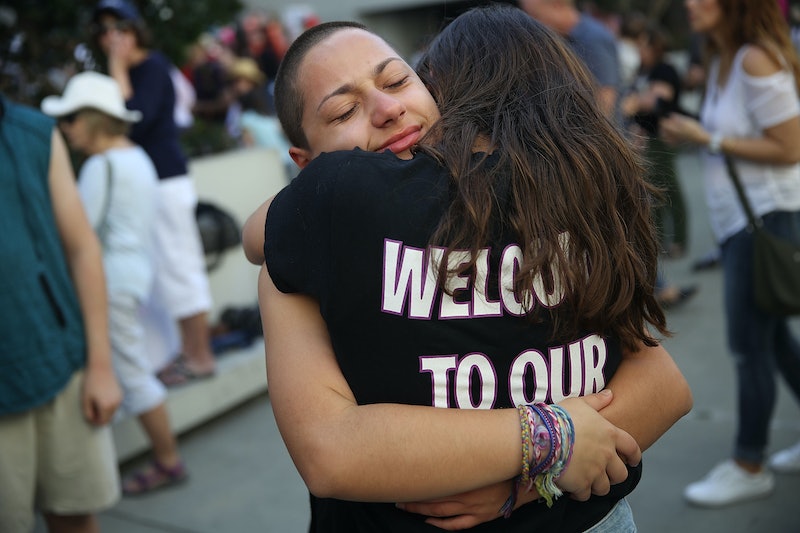 Mass shootings happen with disturbing regularity in the U.S., and yet each one leaves an indelible mark on the national memory. Where were you for Sandy Hook? For Orlando? For Las Vegas, for Sutherland Springs, for Parkland? Each has left a painful image in the minds of millions — and yet none of them has managed to prevent future gun violence. However, the Parkland shooting survivors are starting a movement to change the gun laws — and maybe, just maybe, they'll be the ones to succeed.

There have been moments in the past when it really seemed like Washington would finally change its collective mind on the issue. Barack Obama and Joe Biden started a massive push for changes to gun control legislation after Sandy Hook, and numerous organizations fighting to stop gun violence sprung up among that community.

But it all came to nothing.

A few years later, there was the Charleston church shooting, after which Obama himself gave the eulogy. It was as moving a speech as the nation has ever seen, and it ended in a plaintive expression of sadness from the president — an a capella rendition of "Amazing Grace" that brought tears to the eyes of every feeling person.

And yet, it all came to nothing.

For a brief moment after Las Vegas, it looked like Congress might act to ban the sale of bump stocks, the tool that the Las Vegas shooter used to turn semiautomatic weapons into more rapidly firing automatic rifles. The effort hasn't gone anywhere so far, though, just like an effort initiated by a Republican congressman to improve the background check system after the shooting at a church in Sutherland Springs, Texas.

"We have never seen this. This is completely unprecedented."

However, the movement erupting out of the Parkland school shooting is a little different than all of the other pleas that have come before it.

"This is the first time in my career that I've seen survivors do this," says Victoria Coy, the national director of States United to Prevent Gun Violence. Normally, a big part of her job is coordinating with other leaders in the gun violence prevention movement to coach survivors on becoming advocates, but this time she says that the survivors have beat them all to it.

"These kids are articulate and educated," she continues. "They know the difference between a high capacity ban and an assault weapons ban and which one is more politically feasible. And I don't know who's telling them that. It's unbelievable."

The process of involving survivors in the prevention effort, Coy says, usually goes a bit differently.

"It's not uncommon, after a shooting ... we will find that one of the bigger, more well-funded [gun violence prevention] organizations has reached out to two, maybe three survivors, and we see those people start learning," she says. "They kind of slowly build on their education, and maybe they'll write an op-ed, and we slowly grow our numbers. We have never seen this. This is completely unprecedented."

The survivors of an attack have banded together, educated themselves, and then come out intensely organizing and fighting for real change in the days immediately following the attack.

Another thing that the Parkland survivors have going for their movement is that are tapping into a new, younger reservoir of support — specifically, electoral support. The loudest voices aren't the parents of those lost — they're the friends and classmates. And they're not taking a period to mourn their friends in private — they're mourning them out loud, in the public space, where everyone can hear them. And instead of just grief, it's anger — and resolve.

The teenage survivors have expressed their anger about the amount of condescension coming their way, about years of inaction after numerous school shootings, about the money that politicians have taken from the NRA, about a president who has been unable to offer them any helpful support. And they're not stopping at merely airing their grievances — they've teamed up to create an organization called #NeverAgain, they're pushing for a national student walkout on the one-month anniversary of the shooting, and they're organizing a protest in Washington called March For Our Lives, scheduled to take place in late March. This is happening, and it's happening fast.

"They want action now, not platitudes and wishful thinking."

Tom Campbell of Newtown Action Alliance, a "grassroots organization formed after the Sandy Hook Elementary School shootings," says that this response has "thrilled" him.

"The students know the score and are not afraid to state it. Their demands for safety recognize the immediate need for better control of the availability of and accessibility to guns," Campbell says. "They want action now, not platitudes and wishful thinking, and will agitate to get it through the media, rallies, demonstration, marches, and who knows what else they will think of."

The survivors' fury is almost palpable, streaming out over the internet and through the TV screen. And while not everyone — particularly not most young voters — has had a child, almost everyone has been a high school student. These teenagers are not only speaking to the supposed adults in the room — they're speaking to, and therefore mobilizing, each other.

Emma Gonzalez has stepped to the forefront of all of this — and she's only 18. That means that the 2018 elections will be the first time she can vote, and you can bet that she'll bring her classmates with her. The real reason why this movement has potential beyond any other is that this could get the youngest voter generation engaged and voting more than ever before.

"These students are saying, 'don't look us over, because we vote,'" Coy tells Bustle. "Even before elections, I think we're going to see change immediately."

The students are approaching this with determination and a sort of optimism, uninhibited by the cynicism that plagues so many of those on their side. There's always the chance that this, too, will only lead to minor changes in a broken system. But for once, the Parkland shooting survivors have created, in their sorrow and anger, a glimmer of hope.