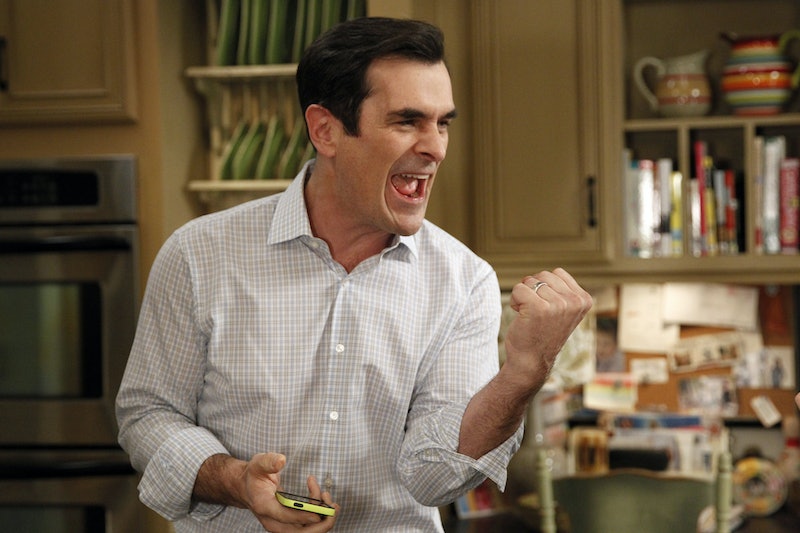 This year, Father's Day is on Jun. 17. That just so happens to be literally around the corner — so you don't have a lot of time left to plan! And while of course you should be spending most of your energy on finding that perfect gift to impress your dad with, you should also be harvesting some hilarious dad jokes to tell him on Father's Day too, because what better way to celebrate your dad, than to celebrate his cheesy dad jokes on social media? Ths is especially important if your dad is guilty of spitting a few cringe-worthy dad jokes of his own. There's nothing he deserves more than an awkward joke to match his awkward jokes.

If you've got a soft spot for ridiculous dad jokes that are so unfunny they're actually worth laughing at, you're going to love this list of epic dad jokes that I've curated for your joke-telling ease. I really can't think of a better way to celebrate my dad's inherent lameness than with a taste-of-his-own-medicine-style dad joke. So, that's my Father's Day plan: Telling my dad a totally ridiculous #dadjoke, ideally whilst giving him his meticulously chosen Father's Day present.

Enjoy these humor fails that are so painful, they're almost adorable.

"Did you hear about the restaurant on the moon? Great food, no atmosphere."

"What time did the man go to the dentist? Tooth hurt-y."

"Spring is here! I got so excited I wet my plants!"

"When does a joke become a dad joke? When the punch line becomes apparent."

"I'm reading a book about anti-gravity. It's impossible to put down."

"What do you call a factory that sells passable products? A satisfactory."

"Why did the scarecrow win an award? Because he was outstanding in his field."

"Why did the coffee go to the police? It got mugged."

"I thought about going on an all-almond diet….But that’s just nuts!"

"What do you call a fake noodle? An Impasta."

"Why do melons have weddings? Because they cantaloupe!"

"The rotation of earth really makes my day."

"Did you know the first French fries weren't actually cooked in France? They were cooked in Greece."

"What do you call a horse that moves around a lot? Unstable."

"Want to hear a joke about construction? I'm still working on it."

"I just watched a documentary about beavers. It was the best dam show I ever saw!"

"What's the best part about living in Switzerland? I don't know, but the flag is a big plus."

"What do you call a lonely cheese? Provolone."

"What do you call someone with no body and no nose? Nobody knows."

"What did the ocean say to the shore? Nothing, it just waved."

"I wouldn't buy anything with velcro. It's a complete rip-off.

"How does Darth Vader like his toast? On the dark side."

"The circle is just the most ridiculous shape in the world. There's absolutely no point to it."

"How do locomotives know where they are going? Lots of training."

"Where do you learn to make ice cream? At sundae school."