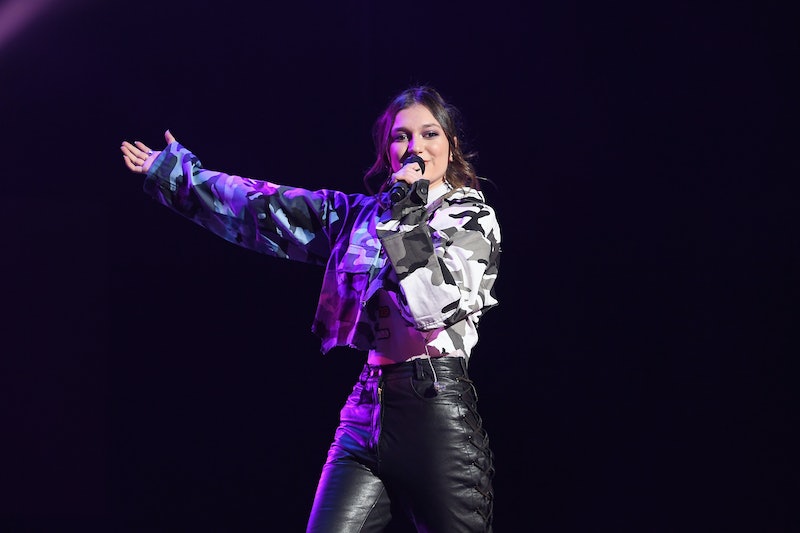 I can still remember the moment that I discovered Troye Sivan's YouTube channel: it was 2013 and it was raining. In that moment, as a closeted and scared teenager, I sat across from my lit computer screen in awe. Upon finding his coming out videos, his music made me feel this new and inexplicable feeling of validation. From that point on, I found myself gravitating towards more LGBTQIA+ artists while I explored my own personhood. Then, I filled my thick light pink iPod mini with other queer artists, followed these musicians closely on social media, and used these artists as living proof that life existed outside of the closet and as a reminder that queer artists and stories were more common than I thought.

Now that I am out, I continue to stream and support artists who are part of the LGBTQIA+ community. Although I encourage you to stream these multitalented artists at your pride themed pre-games, festivals, and dinner parties, you should really support and follow LGBTQIA+ artists all year round.

American singer/songwriter Mikaela Strauss, better known as King Princess, is the confident and cool queer icon the world needs right now. Her singles "1950," "Talia," and "Pussy Is God" are not only gay anthems, but also highlight the complexities of love, sex, and heartbreak. She just released her newest single "Cheap Queen" and has a forthcoming album coming out very soon.

Sydney Bennett began her career as a engineer. Then, when she began working with Tyler the Creator and The Internet, she grew a platform and following of her own. She hasn't released any new music this year, but that doesn't mean her songs aren't timeless additions to all your pride playlists.

Before Dizzy Fae released Free Form, she already performed alongside Lizzo, Kehani, the Internet, and Empress Of. She was also just Billboard Pride's May Artist of the Month.

Not only is Laith Ashley an incredibly talented dancer, model, singer, and songwriter, but he was the first ever transgender model to be a member of the Pit Crew on RuPaul's Drag Race. Since his modeling career catapulted him into the spotlight, he has continued to use his platform to express himself.

From Los Angeles, Gia Woods came out in 2015 to her family through her single "Only a Girl." Since then, she's continued to produce queer anthems “Jump the Fence” and “Keep on Coming,” which fearlessly tackle topics relating to the intricacies of identity, family, and coming out.

Two years ago, Carlie Hanson was working at a McDonald's in a small Wisconsin town. When she posted a cover of Zayn's "Pillow Talk" on YouTube, she went viral and given special recognition from Taylor Swift. Since moving to Los Angeles to pursue music full-time, she has toured with Troye Sivan, signed with Warner Bros. records, and released her first full e.p. Junk.

Known for his poetic lyrics, VINCINT isn't afraid to be vulnerable in his art. He also just headlined LA Pride, performed at Governors Ball in NYC, and is excited to put out his first full EP in the next few months.

Claire Cottrill, better known as Clairo, uses her music as a tool to create the internet spaces she wishes she had when she was younger. In 2017, Clairo went viral with her self-produced video "Pretty Girl," and since then she's continued to release music that speaks to young people around the world. She just announced a forthcoming album IMMUNITY out August 2, and an exciting tour with Khalid.

Swedish singer and songwriter Tove Lo is making the best breakup anthems of all time. After writing songs with Lorde and Ellie Goulding, and collaborating with Alesso, Flume, Nick Jonas, Seven Lions, Broods, Urban Cone, and Coldplay, Tove Lo is ready to finally focus on her own body of work.

Singer and songwriter Zoe Montana Hoetzel, known as Zolita, first went viral with her video "Explosion" on her YouTube channel. Since then, she has released self-directed videos for "Holy", "Fight Like a Girl", and smash singles "Truth Tea", "Explosion", and "Black Magic." She curates her YouTube to be both a safe space for queer and questioning followers, but also as a platform to showcase her many talents.

YUMI is an influential force to watch. As a model, artist, and face of Forever21's International Women's Day Campaign, YUMI has already accumulated over 70k monthly listens on Spotify and has a growing platform on YouTube and Instagram.

When Conan Gray starting vlogging, he had no idea that it would catapult him straight into the pop world. When his song "Idle Town" went viral, he was contacted by a producer and the rest was history. He is currently working on his debut album and has some of the most loyal followers in the world.

As a speaker and activist, CupcakKE continues to carve a path out for herself. Through her raw lyrics, she explores topics ranging from sexuality, identity, and empowerment with both a fierce intensity.

With two EPs under her belt, "Peer Pressure" and "Growing Pains", L Devine makes pop-anthems that speak to growing up, falling in love, and queer identity. L Devine is truly on the cusp on stardom.

Trans activist and creative Mila Jam is unafraid to speak out about issues she care about. In her latest single "Twilight Zone", the artist starts unprecedented conversations about the nature of social change.

Well-known for her pop hits "Don't Let Me Down," "Safe," and "Hide Away", Daya is redefining herself as an independent queer pop-star. She just released smash single "Insomnia," and is spending Pride month touring around the world. She recently came out to her fans on Instagram on National Coming Out Day and is proud to be making anthems for the LGBTQ+ community.

Brett, also known as Leland, has written all your favorite pop-anthems (literally). From Selena Gomez's "Bad Liar" to Troye Sivan's "My, My, My", his lyrics and bops are unmatched in the pop community. Leland is not only spending his Pride month performing at festivals and shows around the world, but he's continuing to write and produce new music and videos for all the most influential forces in pop.

Since Claud dropped out of Syracuse to purse music full time, they've established a name for themselves and achieved the likes of María’s, Clairo, Triathalon, and more. Claud just moved to New York and is dedicated to creating inclusive music for future generations.

For Lauren Sanderson, it all began on YouTube and SoundCloud. After posting Maroon 5, Jason Mraz, and Adele covers, the artist released a self-produced single and video titled "Drive". Since then, she's continued to perform at festivals, connect with her fans on social media, and create music.

Carlos Vara is the pop-sensation we all needed in high school. In his newest singles, he explores topics relating to identity, insecurity, and mental health.

When CLAY writes songs, she wants them to reflect what's going on in the world. She just recently released HUES which is a collection of six songs that reflect her experiences growing into herself.

From Wilmette, Illinois, the very gifted Kristine Meredith Flaherty is in love and making the music she's always wanted to make. Best-known for her debut album Life as a Dog, she has also been nominated for two Grammys and has a forthcoming album out this summer.

Alextbh is unafraid to be himself, although he grew up in a conservative Malaysian family. For him, his music is not only an outlet for him to express himself, but also a platform to promote equality and fight for change.

When Maggie Lindemann came out as bisexual on Periscope, she had no idea how people were going to respond. Now, she is making music that finally reflects who she really is. She has an Instagram following of over 3 million, and has some of the most loyal fans in the world. In her music, Lindemann explores topics related to growing up, social media, and friendship.

From Utah, The Aces are a cool girl band made up of four best friend: Katie Henderson, McKenna Petty, Alisa Ramirez, and Cristal Ramirez. They may have formed The Aces in high school, but that doesn't mean they've grown apart musically as they've continued to grow into themselves.