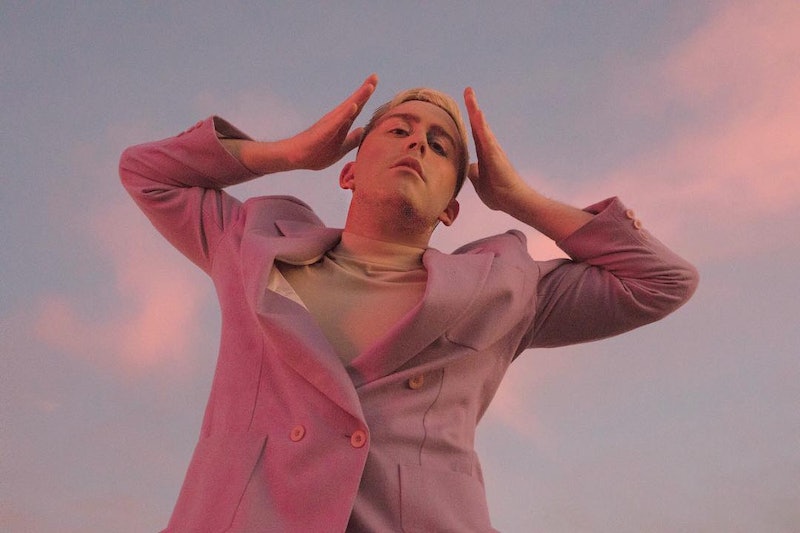 "I know that I’ll be thinking too much about you," Leland passionately sings to a sea of fans as one of the opening acts for Troye Sivan's Bloom Tour on Oct. 10 at Radio City Hall. Although Leland's song "Middle Of A Heartbreak" had only recently been released, it's already resonated profoundly enough to turn a room full of fans into an amphitheater singing in perfect unison.

Known for his work co-writing songs with artists like Sivan ("My, My, My," "Suburbia"), Selena Gomez ("Fetish"), Allie X ("Paper Love"), Betty Who ("The Other Side"), Daya ("Hide Away"), Charli XCX, ("1999") and Carlie Hanson ("Mood"), among others, Leland has long had a big influence in the pop music world. But he's also doing impressive work on his own, releasing multiple solo tracks like "Mattress", "Run Into You," and "Half of You", featured in the Netflix movie Sierra Burgess Is A Loser.

Leland's path to pop stardom began at an early age. "I grew up in South Mississippi, which as you can imagine was a tough place for a gay boy to find himself. My first pop stars were actually all Christian singers," he tells me when we chat recently. "I remember watching Britney Spears perform “Oops I Did It Again” on the VMAs [when I was really young] and wondering who exactly was behind that song... it wasn’t until I discovered Britney that my love for pop blossomed into what it is today."

Writing songs seems to have always come naturally for Leland, as did making connections in the music industry. "Through friends I was introduced to Daya, and an [at the time] 18-year-old Troye Sivan," he recalls. "These friendships were organic and just continued to grow into what they are now today."

When co-writing songs with those artists, Leland says that he doesn't see the process of creating as linear or uniform. "Whether [an artist and I] nail it on the first song on 100th song, it’s always in the back of my mind to let the artist feel like they are exploring and growing while trying to write the best song possible," he explains.

The time frame between writing a track and releasing it can range from weeks to months, he adds. It's no surprise, then, that he feels the most challenging part of collaboration is simply "[having] patience."

Out of everything in his vast portfolio, Leland is proudest of his collaboration with Sivan on the song “Revelation” for the 2018 film Boy Erased, about a boy forced into a church-supported gay conversion camp after coming out to his religious parents. In December, "Revelation" was nominated for a Golden Globe for Best Original Song. "That movie and story are so relevant to my life," says Leland now. "It’s emotionally overwhelming to see others responding to it as well."

He's also clearly proud of the music video for "Middle Of A Heartbreak", released on Dec. 7. In the video, directed by Jasper Soloff, the star appears in a small, pastel-colored space, literally in the midst of depressing remnants of a broken relationship. As he moves through each frame, he is both alone and surrounded.

"This feels like the next step in [my] natural progression both sonically and visually," he says of the video and song. "I’m always trying to straddle the balance between creating pop that’s nostalgic, but that also feels fresh." These intentions are more than self-evident in his new work, and his future plans: more collaborating, touring, and releasing new music. It all confirms that Leland will only continue to take over the pop world, one catchy bop and intriguing music video at a time.

More like this
In 'The White Lotus,' Leo Woodall Gets His Moment
By Gabrielle Bondi
Elizabeth Debicki On Her Approach To The Most Debated Scene From 'The Crown'
By Grace Wehniainen
Michelle Williams Laughs Often About Motherhood Thanks To 'The Fabelmans'
By Marina Watts
Shania Twain Replaced Brad Pitt’s Name In “That Don’t Impress Me Much” At The PCAs
By Jake Viswanath
Get Even More From Bustle — Sign Up For The Newsletter