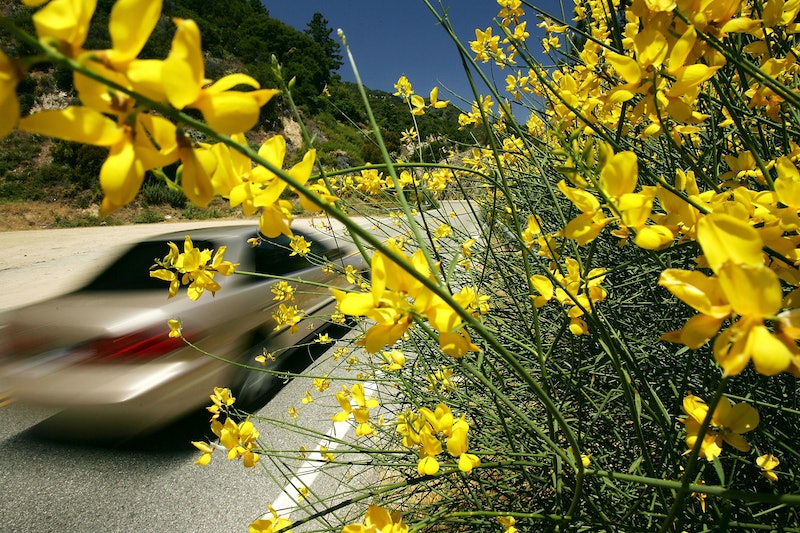 Another day, another Mercury retrograde on the horizon — you know the drill. As you make your summer plans, keep in mind that Mercury retrograde summer 2019 starts on July 7 and rages on through July 31. During this period, good ol' Mercury — the planet that rules over our tech devices, travel plans, thinking and information sharing, and communication of all kinds — will appear to move backwards in the sky from our vantage point here on earth. As Mercury backtracks directly over the portion of its elliptical that it most recently covered, it's also believed that we feel the effects of this perceived movement in all the aforementioned areas of our lives ruled by this planet.

It's also lost on no one that July is reportedly one of the most popular months of the year to take a vacation — so yeah, it definitely sucks that the planet of travel is taking one of its oft-dreaded backspins during the majority of that time period. In addition to travel snags, we'll also want to be extra careful with our communication (like, don't send that juicy piece of gossip to the whole group chat instead of just your BFF), with our tech devices (not the time to leave the protective cover off your phone, people), or with any major decisions (avoid signing contracts, if at all possible).

But of course, life goes on, and we should all do our best to work with the energy of the retrograde instead of against it. That's why using some Mercury retrograde summer 2019 protection rituals can be both a fun and useful practice to help you really jive with the unavoidable energy of this astrological transit.

If you're ready to get witchy and ~protect your energy~ from the potential havoc of this retrograde, try one of the following rituals.

Traveling during the month of the July might be kind of unavoidable — especially if you already had a solid vacation planned out in advance. Since Mercury retrograde has a tendency to practically guarantee travel snags and annoying delays, here's a protection ritual inspired by a lovely travel charm tutorial by Wiccan Spells. With this ritual, you'll create a travel charm to carry with you during the July retrograde that will help to magically keep things running smoothly.

What to do: Begin the ritual by cleansing your spiritual workspace and placing the two orange candles on your altar (or wherever you'll be performing the ritual). Light the candles, and hold your clear quartz crystal in your hands. As the candles burn in front of you, focus on your upcoming travels and imagine them going as smoothly as possible. If needed, close your eyes to allow yourself to visualize a positive travel experience as vividly as you can. Imagine this visualization being charged and stored within the clear quartz.

Once you've finished the visualization, take the piece of paper and pen and draw a symbol that represents protection to you personally (if you can't think of anything, simply draw a grounding pentagram). Alternately, you can write down a simple positive affirmation relating to smooth travels instead of making a drawing. As instructed by Wiccan Spells, fold the paper in three and then place it inside your small pouch.

Now you may also place the clear quartz into the pouch (which has been charged with your intention), along with a sprinkle of the dried mint for added protection. Tie up or seal the pouch securely. You may close the ritual by holding the sealed pouch in your hands and visualizing "a white light flowing through you and filling your aura, as you imagine yourself arriving at your destination safely," as instructed by Wiccan Spells.

Allow your two orange candles to burn down safely and completely (if they haven't already by the time you've completed the ritual). Now congrats: This is your travel talisman, so you should carry it with you during any Mercury retrograde summer 2019 journeys!

Sometimes the energy is just being served, so you've got to deal with it the best you can. Such is often the case for Mercury retrograde. The following is based on a really cool Mercury retrograde remediation ritual created by Sphere & Sundry, and is designed to help you deal with the unavoidable energy of the backspin since truly, it can't be prevented.

What you'll need: Storax and/or another incense of your choice.

What to do: Begin the ritual by cleansing your space and then lighting your storax (and/or another type of incense) as an offering. The planet Mercury is associated with the mythical god of the same name, and he is also known as Hermes — but in the case of Mercury retrograde, we may want to rethink who we call upon in our rituals. "The face of a retrograde planet is different from its standard presentation," explained Sphere & Sundry on its site, "so we shan’t be appealing to Mercury proper, who is drunk. We’ll be turning instead to Hermes Chthonius." What exactly is the difference? Well, the blog Sketchbook Dandy explained it well: "Hermes Chthonius is an aspect of the god, Hermes, that accompanies souls on their final journey," explained the post. "It’s a bit darker than that happy go-lucky Hermes that we’re all familiar with when it comes to the cheerleader of Mt. Olympus."

That said, we'll appeal to this other (and perhaps more receptive) aspect of Mercury in this ritual using the following chant known as the orphic hymn to Terrestrial Hermes, which can "help us navigate the chaos Mercury retrogrades sometimes bring," according to Sphere & Sundry:

Hermes I call, whom Fate decrees to dwell in the dire path which leads to deepest hell / O Bacchic Hermes, progeny divine of Dionysius, parent of the vine, / And of celestial Venus Paphian queen, dark eye-lash’d Goddess of a lovely mien: Who constant wand’rest thro’ the sacred feats where hell’s dread empress, Persephone, retreats; / To wretched souls the leader of the way when Fate decrees, to regions void of day: Thine is the wand which causes sleep to fly, or lulls to slumb’rous rest the weary eye; / For Persephone’s thro’ Tart’rus dark and wide gave thee forever flowing souls to guide. Come, blessed pow’r the sacrifice attend, and grant our mystic works a happy end.

Say the chant aloud and meditate on the scent of the incense. Now, write out a list of any issues you're facing during this retrograde period, and ask for guidance on how to remedy them. You can repeat this ritual throughout the retrograde period when you face difficulties and need a quick piece of advice.

This Mercury retrograde is taking place in the flashy, Sun-ruled sign of Leo — meaning our public affairs and reputations are definitely feeling the sting of the retrograde-powered mishaps and snags. Given the likelihood that communication errors are for sure going down, protect your self-image using the following ritual, which was inspired by a reputation-restoring spell created by Magic Spells And Potions.

What you'll need: A small cauldron or fire-safe bowl; charcoal (or a small tea light candle, if needed); strips of a paper and a pen; salt.

What to do: Begin the ritual by, of course, cleansing your space, and then lighting up a small fire in your cauldron or fire-safe container. You can do this by lighting your charcoal pieces, or, if necessary, simply by lighting a small tea light and placing it safely in the container. Sprinkle some salt upon the fire as you say the following aloud, as instructed by Magic Spells And Potions: "I call upon the forces of the universe above and below, within and without, to aid me and support me on this day."

Take several deep breaths and allow the warm strength of the fire to burn and take root energetically. Gaze into the flame, syncing with its Leo-ruled power, and say the following chant by Magic Spells And Potions: "As this fire burns / so the tide now turn / swipe away the old / let the new unfold / By the stars above / and the earth below / this is is my will, now make it so."

Once that portion is complete, take your pen and strips of paper, and on each strip write something you're concerned about regarding your self-image and how others are perceiving you. Mercury's backspin can cloud everyone's thinking, and if you get the sense that your reputation is being a lil' tarnished (which isn't unlikely under a Leo-ruled retrograde), then write everything down and get it out on paper.

Once you feel you've purged these negative concerns, set them ablaze with a lighter or match one by one and allow them to burn completely in the cauldron or fire-safe container. After placing each strip to burn in the container, say the following aloud as well, as written by Magic Spells And Potions: "The old is gone, the new begun, my will is done."

Sprinkle a final dash of salt over the flames and the ashes of the paper strips and close the ritual.