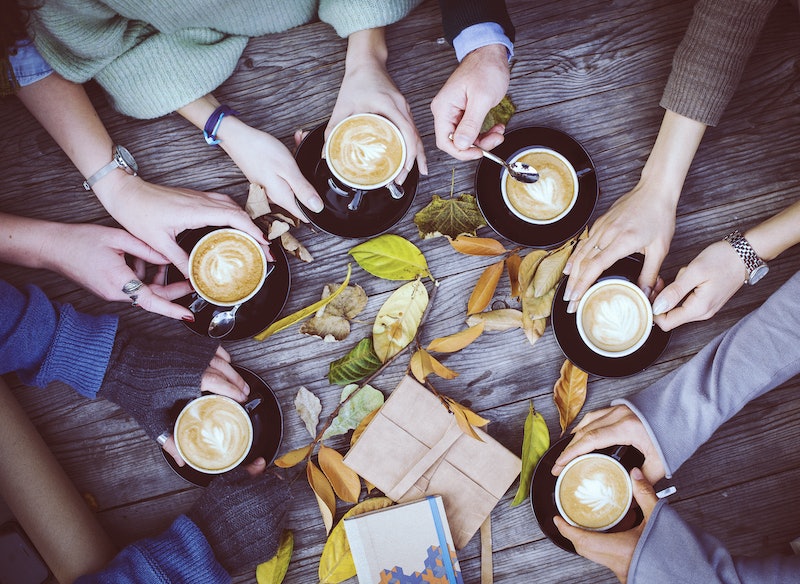 If you've ever wanted to increase your happiness levels, you're not alone. Science has known for a while that increasing our social interactions can help us feel happier, and now new research indicates that even a small amount of extra social encounters can create real differences in mood. Even serious introverts — people who find that social environments sap their energy — can benefit from three more social interactions per week. And the happiness that can result from this small social boost, researchers say, is formidable.

"Basically, social interaction is really key to happiness," Dr. Sonja Lyubomirsky, Distinguished Professor at the Department of Psychology at the University of California Riverside and author of The How Of Happiness, tells Bustle. Dr. Lyubomirsky has been a researcher into happiness and how it functions for 30 years, and has undertaken a lot of different studies on how particular actions, known as "positive activity interventions," might affect our happiness. She and her team have been testing various different ways to boost happiness, including writing gratitude letters or acts of kindness. And one experiment showed a radical increase in happiness: seeking out just three more social interactions per week.

"We did a study recently where we asked people to engage in three more social interactions each week for a month than they would normally do," Dr. Lyubomirsky tells Bustle. (The study is currently under review for publication.) "People felt more connected and happier when they did." The good news was that the study didn't imply that these social interactions needed to be huge parties or big events that introverts would find exhausting. Increasing your social interactions, says Dr. Lyubomirsky, can be as simple as having lunch with a friend. "It can mean more quiet one-on-one social interactions throughout the week. That also makes people happier. It doesn’t have to mean being the life of the party."

Dr. Lyubomirsky is also behind another study forthcoming in the Journal of Experimental Psychology: General, which found encouraging college students to act more extroverted in general for a week boosted happiness, but stresses that this doesn't mean introverts in general are unhappy. "I don’t want to imply that introversion is a bad thing; there are many great benefits to being an introvert. I don’t want introverts to think there’s something wrong with them and they’re not happy because they’re not extroverted," she tells Bustle. Dr. Lyubomirsky says that even though her research has shown that acting more extroverted can increase happiness, that doesn't mean that being introverted is a bad thing. "All we’re showing is that if you ask people to act more extroverted for one week, they experience more positive emotions."

If you don't want to go full extrovert, though, you can get the same benefits through simply scheduling a few more coffee dates, chats with coworkers, or calls with long-distance friends. This is also a good approach for less naturally social people. who might find pretending to be really sociable over a long period exhausting. "If you attempt to be an extrovert for two or three months, introverts might not get a benefit because they’d get fatigued," Lyubomirsky says. Her research indicates that a general uptick in social interactions is good for your happiness because of its effect on your wellbeing, but that it can be helpful to manage it in a way that suits your social personality.

Why does being social increase happiness? It's a big question. "People have misconceptions about what will make them happier; they think an action might be terrible, but when they try it it makes them happier," Lyubomirsky tells Bustle. Part of her findings in the study published in the Journal of Experimental Psychology: General indicated that people who really wanted to be more extroverted saw big increases in their happiness when they forced themselves to be extroverted. That's only part of the answer, though. "The word extroversion has strong connotations in our culture," Lyubomirsky says; we learn from an early age that extroversion, self-confidence and sociability are valuable, so people may feel their social interactions increase their social value, leading to happiness.

There have also been many studies that suggest that loneliness directly impacts our happiness in a negative way, and can also make us unhealthier. Humans are innately social animals who evolved to live in supportive communities; research has even shown that strong friendship groups are more important for happiness than your family is. When we're isolated, our brains react poorly, and we don't reap the significant benefits of social time with others — mutual support through bad times, feelings of belonging, even just the chance to bitch about a shared issue. So if you're feeling a bit down, scheduling just one friend date every other day might be just the thing to make your general mood improve.