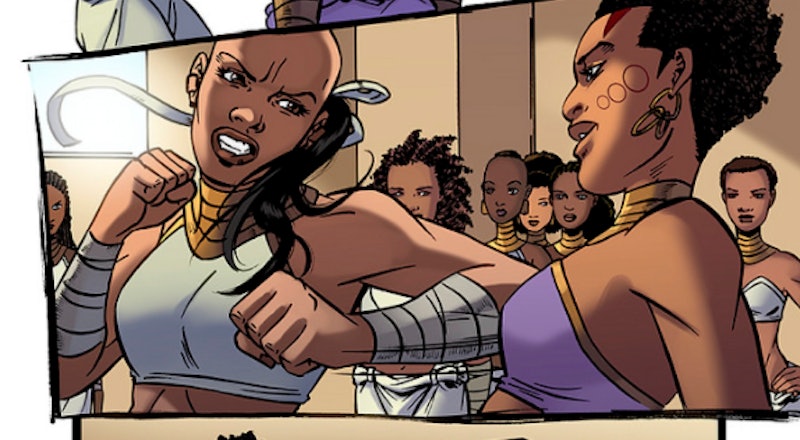 Roxane Gay is a force to be reckoned with. Most known for her work Bad Feminist, a book of essays relating to being a woman in the 21st century and the struggles that go along with it, she’s also a novelist, a short story writer, a political activist, a The Bachelor aficionado, and now, a comic book writer. Despite the interest in her prose work, her recent deal with Marvel, The World of Wakanda, has slid under the radar of too many readers. Whether or not you read comics, you should definitely consider picking up a copy of this phenomenal series.

The World of Wakanda was announced last year as a companion series to Ta-Nehisi Coates Black Panther comic. (Coates is credited as an advisor on Gay’s work.) While it seemed to receive due credit at the time, Wakanda has faded into the comic universe, leaving too many readers unaware of truly how revolutionary it is. Here are three reasons why you should consider picking up an issue.

1. Wakanda is a separate world (run by women)

Unlike many feminist comic stories, Gay doesn’t feel the need to explain why there aren’t any men around. Her characters exist in a world where it is completely possible for women to hold most the power — and it is never once questioned why this is the case. Unlike some works such as Bitch Planet or Y: The Last Man, we don’t need the details why these women are badass or what has driven them to be that way: they just are.

2. The characters don’t need to apologize

Gay’s two main characters are black and queer, but they have emotions and conflicted feelings not related to these aspects of their identities. There are things at stake (including the safety of their world) that are larger than these facets of the characters that would have been nitpicked in the past by readers and comic critics. Of course, Aneka and Ayo have internal struggles, but they are not related to how society views them or feeling marginalized. They are warriors—and lives are at stake.

3. The writing is just that good

Gay’s writing truly is (as is expected from her past work) well done. She even manages to bring back the thought bubble, reminding us that the internal dialogue that these brave women think has just as much importance as they try and fulfill their duty — and find themselves conflicted about it later.

It’s an exciting time for comic readers. We have a female Thor, a Muslim Ms. Marvel, and, of course, America Chavez. Gay’s voice represent women in comics the way that they should be represented: flawed and loving, cunning and angry, gay or straight, and from every race and background. She also does it with class and humor, making it reason enough to pick up the most recent issue.