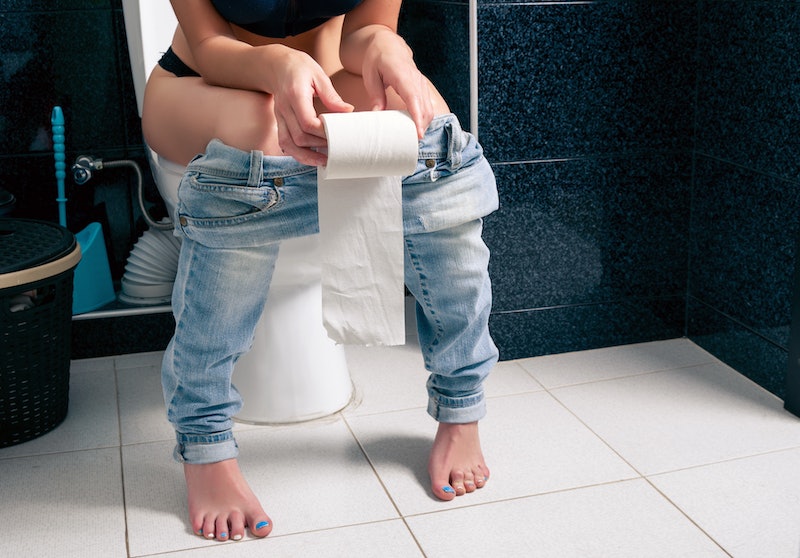 According to the Mayo Clinic, over half of women will contract a urinary tract infection (UTI) at some point in their lives. Conversely, the Urology Care Foundation points out that only about 12% of diagnosed UTIs are experienced by men — making the complicated business of recognizing the signs you have a UTI largely an issue for people with vaginas. But as common as they are in women and other people with vaginas, how do you know if you have a UTI, and what causes them in the first place?

First, an explainer on what UTIs are: per the CDC, the infection occurs whenever bacteria gets into the urethra and then travels up to the bladder. The Mayo Clinic explains that it happens more commonly in people with vaginas simply because they have shorter urethras than people with penises, meaning bacteria has more access to the bladder. While UTIs are relatively common and easily treated, they can cause discomfort — and in extreme cases, UTIs can develop into kidney infections, which require immediate medical care.

If you think you might have a UTI, it's important to identify your symptoms and make an appointment with your doctor for treatment options. For instance, UTIs and stomach pain often go hand-in-hand — as do symptoms like changes in your pee, or the sensation of it. Bustle reached out to Niket Sonpal, MD, an NYC-based internist and gastroenterologist, and adjunct assistant professor at Touro College of Osteopathic Medicine, who listed some symptoms to look out for.

1. Changes In The Sensation Of Peeing

Dr. Sonpal tells Bustle there are two major symptoms to look out for when it comes to UTIs and pee — the first is a "burning feeling when you urinate," and the second is a "frequent or intense urge to urinate, even though little comes out when you do."

This burning sensation happens because UTIs cause the linings of our bladders and urethras to become inflamed and irritated, per the American Urological Foundation. This is one of the most common symptoms, and usually the first noticeable one, especially when coupled with the constant urge to pee — this is also caused by the irritation, which tricks your body into thinking your bladder is full even when it's not. The AUA notes that this may also cause involuntary leaking of urine in some cases.

2. Changes To Your Actual Pee

Beyond changes to the sensation of peeing, Dr. Sonpal also warns that "cloudy, dark, bloody, or strange-smelling urine" may be indicative of a UTI. Similarly, the Mayo Clinic advises you to see a doctor if your urine is dark or orange, or if there's blood in it. The presence of blood in your pee could actually indicate other serious problems like kidney stones.

Still, it's important to note that there are a lot of other factors besides UTIs that can change the color, consistency, and smell of your urine. The Mayo Clinic lists medications and food dyes among other things.

3. Your Back Or Stomach Hurt

If you're feeling an aching pain or pressure in your tummy or lower back, particularly if it's paired with the symptoms we've already discussed, then UTI-caused inflammation of your bladder might be to blame. Getting a UTI and stomach pain is not an uncommon occurrence. Dr. Sonpal lists "pain or pressure in your back or lower abdomen" as a possible symptom, which, per the CDC, can be caused by pressure or cramping in the groin from the UTI.

That said, in some cases, this could also indicate the infection has reached your kidneys — Dr. Sonpal notes that this is often accompanied by "fever and chills." Whatever the case may be, you should make an appointment with your doctor as soon as possible, as kidney infections can reach the bloodstream and, per the AUA, become a "life-threatening health issue."

Urinary tract infections are pretty common, but can also be deeply uncomfortable, and in some cases, lead to worse conditions. Fortunately, though, if you learn how to spot the signs of a UTI before they get too severe, then you can get the treatment you need.

In the meantime, the CDC recommends seeing your doctor if you suspect any of these symptoms are indicative of a UTI, and seeing a doctor right away if you experience the aches, fever, or chills associated with related kidney infections; most UTIs can be treated on an antibiotic course of one to three days, but recurrent or more severe UTIs may require more intervention, per the Mayo Clinic. In terms of prevention, the CDC recommends practicing good hygiene, staying hydrated, and making a habit out of urinating after sexual intercourse as methods to keep bacteria from reaching the urethra and causing UTIs.

This article was originally published on Oct. 20, 2015