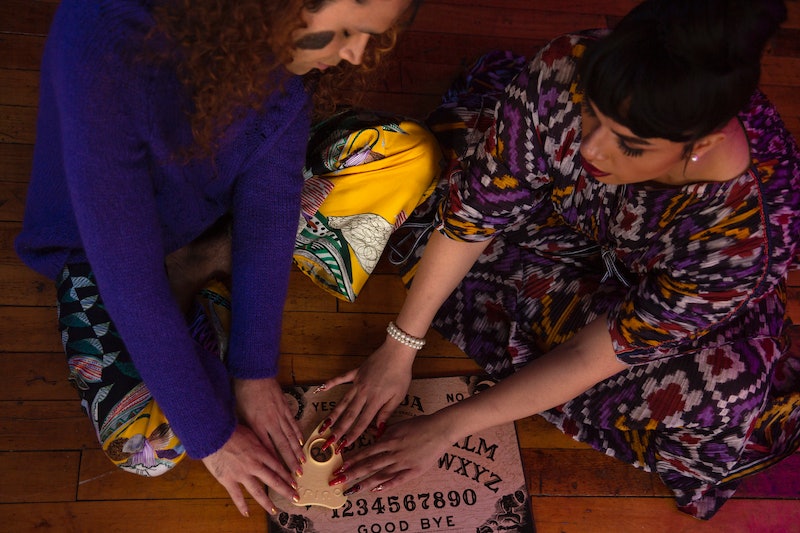 For many people, Halloween is all about dressing up in costume and being someone else for a night. But for a lot of trans folks, Halloween is all about being yourself. Being trans on Halloween can mean being yourself without necessarily being out: you can dress the way you want and fulfill your gender dreams — without people challenging or endangering you because of your gender expression.

"I love Halloween because I'm able to dress up and bind my chest without being questioned on it," says Sam, 21. And Adrian, 22, loves the holiday for similar reasons: "It's the feeling of freedom you get on Halloween and Purim," they tell Bustle, "because no one blinks twice at an assigned female at birth person with short hair dressed up as Superboy."

Of course, not every trans person is able to take advantage of the gender norm loopholes that occur on Halloween. For many trans femmes, for example, the idea of dressing as a Disney princess or Captain Marvel is too dangerous, too risky, even on October 31st, given that trans women are so often targeted for gender-based violence. This is perhaps especially true for trans femme children on Halloween, because you can't pick your friends or classmates when you're in school.

But trans femmes and trans masculine folks alike often find, through childhood and adulthood, that Halloween can still be a powerful outlet for gender expression. Precisely because cis straight people will often register your Halloween costume as just that — a costume — it is often safer on the holiday for you to find costumes that match your gender feelings.

Feeling safe in your gender expression is also important for mental health, according to a 2016 study published in the journal Pediatrics. Trans children who are supported in expressing their gender and are surrounded by people who embrace their gender expression and identity, the study found, have much lower rates of depression and anxiety than trans peers who do not have safe outlets to be themselves. If Halloween presents an opportunity for trans kids (and adults) to explore gender in a safe and supportive way, all the better for trans mental health.

Trans and nonbinary folks may seek gender affirmation through Halloween before we even come out to ourselves, Sam, who identifies as a masculine-of-center enby, explains. Indeed, they only realized why being boyish on Halloween has always felt so natural since they've come out to themself recently. "When I used to bring my sisters trick-or-treating, I'd dress as a ghoul or a typical male superhero," Sam tells Bustle. Even before they knew why, they say, "it always felt so good when people asked if I was their brother instead of their sister."

In this way, Halloween can provide a safe outlet for trans and nonbinary people who aren't out to express themselves. Adrian, who is nonbinary, discovered the gender magic of Halloween in their freshman year of high school. "I walked around with my hair tucked up in a beanie," they tell Bustle, "and when classmates asked me who I was, I told them I was 'Clark Kent but before he left Kansas' and no one blinked an eye."

Sometimes, though, dressing outside your gender norm does cause a splash, especially in high school. But for Jordan, a 30-year-old trans guy, that splash was a good thing: being boyish was such a norm for him in high school that Halloween was an opportunity to dress in same-gender drag. "In high school," he tells Bustle, "everyone would gasp when they saw me on Halloween, because I used the holiday to rock out flowing dresses and low-cut outfits, which I never ever wore." His classmates' surprise at his feminine costumes affirmed his boyishness at the same time as it allowed him to embrace his girliness. "Even though I wasn't out to myself at the time," he says, "I knew that I could love my femininity on Halloween without people thinking it meant I wasn't really a boy."

Whether you're not out, have been out for years, or are just figuring out what makes you feel great in your body, Halloween can a safe space and time to explore your gender and how you want to move in the world. However you find yourself expressing your gender on Halloween, remember that your costume choices are valid. But even on Halloween, being true to yourself can be nerve-wracking and terrifying. The good thing, Adrian tells Bustle, is that Halloween also offers a great reward for being your wonderful trans self: "Candy," they say. "All the candy."