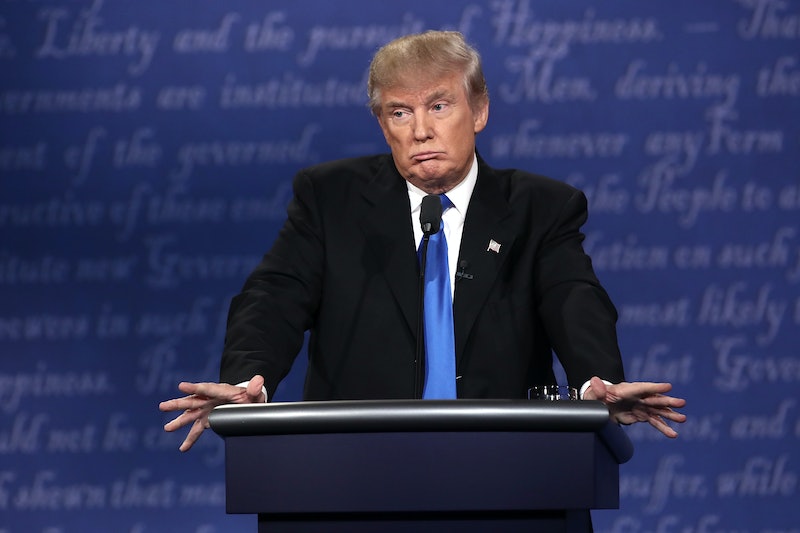 President Donald Trump is a loser. I mean that literally: On Thursday evening, Trump lost another court battle over his travel ban. The two-week-old immigration order bans refugees and immigrants from seven Muslim-majority countries from entering the United States, and the block placed on it last week by Washington state judge James Robart last Friday was upheld by the Ninth Circuit Thursday. "SEE YOU IN COURT" memes and tweets make fun of Trump's all-caps response to the news.

Because if there's one thing President Trump cannot bear to be, it's a loser. To Donald Trump, either one is a loser or one is a winner. If you happen to be a loser, you're in good company — Trump has said as much about figures including Meryl Streep, Hillary Clinton, John McCain, and, um, his own son, Donald Trump Jr. (Parenting goals!)

Remarkably, the Washington state attorney general also replied in caps: "DENIED. UNANIMOUS. PER CURIUM," he tweeted shortly after the stay was upheld. This is what 2017 has come to, ladies and gentleman: Our elected officials shouting at each other about who's going to get the last word. On Twitter. In all caps.

Here are some of the best memes and tweets about "SEE YOU IN COURT."

5. It Applies To Everything!

6. The ACLU With A Zinger

20. What A Surprise For Them

22. If Only Reese Were There

27. Yelp Should Brace Itself

I have a feeling "SEE YOU IN COURT" is going to appear on a T-shirt near you very soon.